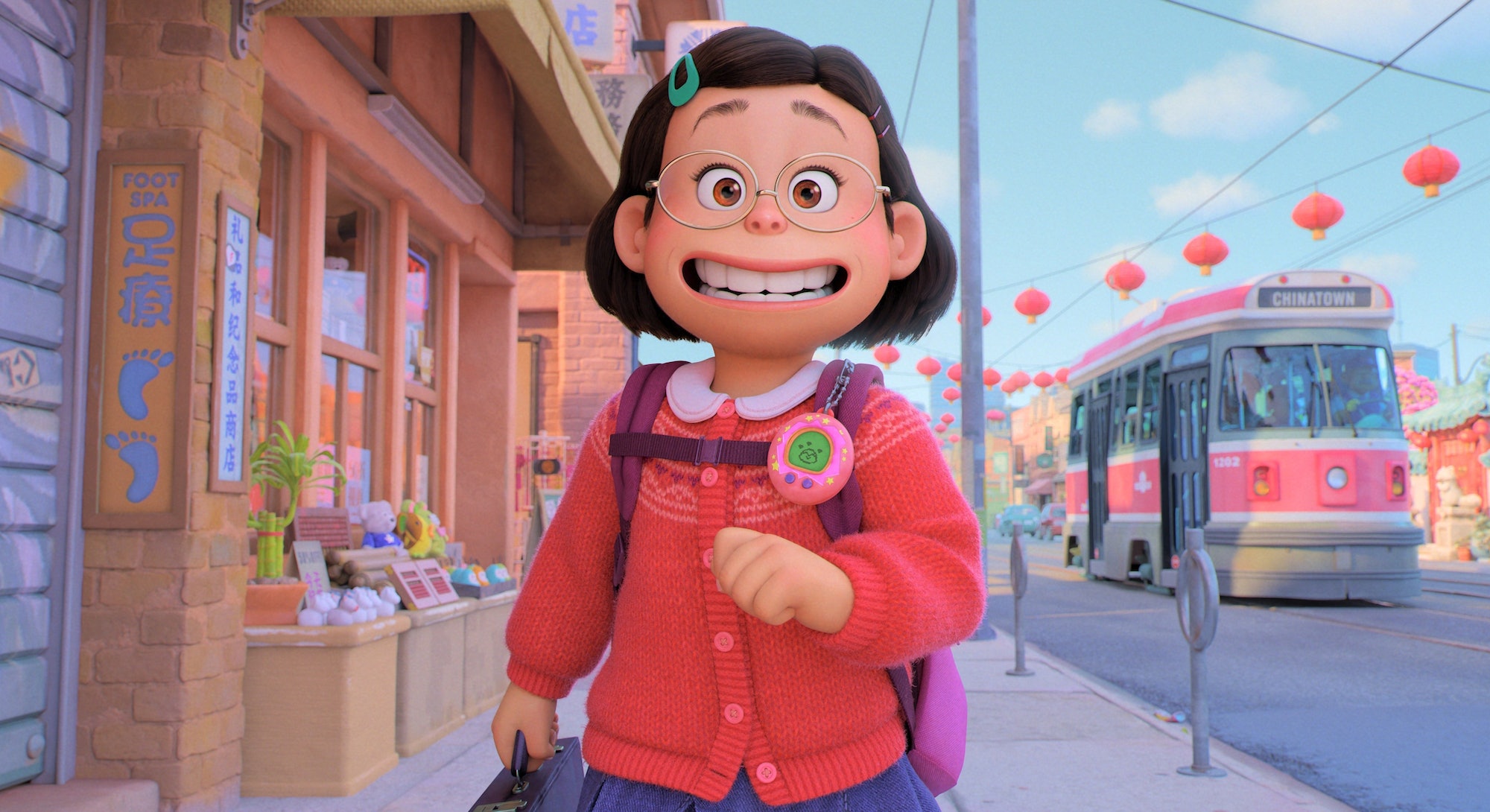 In Pixar’s Turning Red, Domee Shi Has Created “The Dorky Canadian Folk Hero” Of Our Dreams

It’s one of those movies I know I’ll watch again and again, even when the kids aren’t around.

The first time a boy called my house, I remember feeling like all the air had suddenly left the room. My dad picked up the phone and froze when the caller was a guy from my class. He handed me the phone in front of my entire family, and I genuinely wasn’t sure I could move, let alone engage in conversation with someone from the opposite sex in front of my dad, mom, and two younger sisters.

Luckily, I survived that life-altering moment intact, but watching Pixar’s new animated feature Turning Red, I was transported right back to that adolescent nightmare.

Director Domee Shi, who won an Oscar for her animated short Bao, tackles the transformative, powerful experience of tweendom and puberty, that tender age when love, family, friendship, and identity all seem to hang in the balance, hinging on our ability to survive the transition from childhood to something else… someone new.

The film centers on Meilin Lee (Rosalie Chiang), a funny, sweet, outspoken 13-year-old girl. “I really wanted Mei to feel like this dorky Canadian folk hero,” Shi tells me over Zoom. “I just wanted the audience to fall in love with her right away.”

And we do. In Meilin, Shi has created one of the most engaging, lovable, and charming lead characters I’ve ever seen.

Seeing Mei make CDs of her favorite cheesy band, taking the streetcar by herself, and anguishing over her crush on the cool boy working at the corner store, I was instantly transported back to a time when slinky pop stars and oily boy bands reigned supreme.

Mei, as she’s known to friends and family, juggles good grades, helps to take care of her family’s business, and hangs out with her best friends and fellow devotees of a boy band called 4*Town, all while keeping her Tamagotchi alive.

Turning Red is also unabashedly set in Toronto in 2002. As someone who looks out at the CN Tower from my bedroom every night, often with my 4-year-old son who has become obsessed with the Turning Red trailer, I love that this film was so proudly set here.

The Turning Red trailer, featured daily in our home

“I just think [Toronto’s] such a cool city,” Shi says of her hometown. “And I wanted to share with the world, the classmates that I grew up with and how diverse they were and my friend groups and just really share such a unique city with the world.”

Setting the film in the early aughts also creates an instant connection for the millennial parents watching along. Seeing Mei make CDs of her favorite cheesy band, taking the streetcar by herself, and anguishing over her crush on the cool boy working at the corner store, I was instantly transported back to a time when slinky pop stars and oily boy bands reigned supreme.

It’s an era particularly acute for Shi, who says she has so much nostalgia for the same time. “It was the height of boy band mania, teen girl, pop culture mania, and it was right before social media took over too,” she says.

The uniqueness of this film is evident within the first 20 minutes. As Mei takes on adolescence, she also bears the burden of balancing the cultural traditions and expectations of her Chinese parents Ming (Sandra Oh) and Jin (Orion Lee) with the newfound desires and curiosities of a budding tween. And to top it all off, she’s started turning into a giant red panda at the hint of stress and anxiety.

When Mei becomes a panda, her body is no longer her own; it becomes something alien to her while alienating her from the people around her. It’s a touching and perfectly executed metaphor for the emotional and physical transformation of puberty.

I always felt like people could read the changes my body was going through on my face. Like every morning I was at risk of coming out of my room somehow transformed into a new creature, one who sweats and stinks and bleeds. As soon as I turned 13, I started to obsess over the impending arrival of my first period. Every time I went to the bathroom, I’d check my underwear for blood like a fervent crime scene investigator. If I had access to a black light and luminol, I absolutely would have employed both in my search for proof that I really was changing into... well, honestly I wasn’t sure what I was turning into, but I knew it was something! My mom did her best to talk me through what was coming, but her desire for openness was impeded by her own upbringing in a strict South Asian home, where periods and puberty were extremely loaded topics.

Puberty felt like a constant alarm bell, signaling to everyone around me that something had changed.

When the day finally came for me, I cried for hours, unsure how to navigate this new phase of life but equally worried about how this development would affect my relationship with my mom. Did she see me differently now? Something felt unspoken between us about what my period signaled. Puberty felt like a constant alarm bell, signaling to everyone around me that something had changed. I tried to shrink myself, to quiet the noise around the woman I was supposed to be becoming. Especially when all I wanted to do was hide in my room looking at my worn-in Tiger Beats and Seventeen magazines.

Turning Red so beautifully navigates this complicated relationship between mother and daughter and how it evolves during the teen years. It’s one of those movies I know I’ll watch again and again, even when the kids aren’t present.