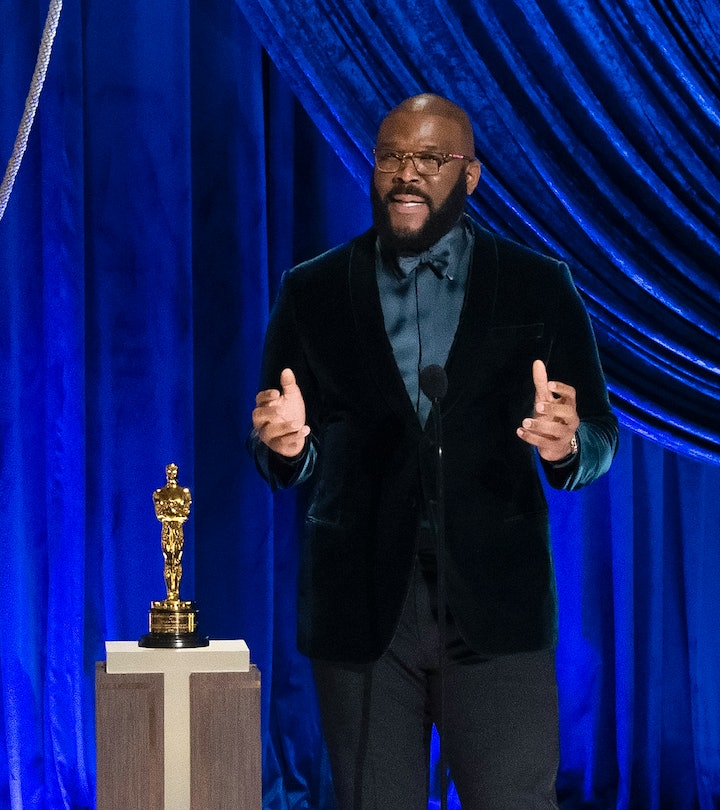 The actor asked others to join him in refusing to hate or make blanket judgments about others.

While accepting the Jean Hersholt Humanitarian Award at Sunday’s Oscars ceremony, Tyler Perry credited his mom with teaching him to “refuse hate.” The actor, director, and philanthropist called on others to also stand against hate based on race, ethnicity, sexual orientation, and more. To a standing ovation from his peers, Perry then urged people to unite and meet in the middle, where he said “healing” and “change” happens.

Perry recounted how his mother grew up in the Jim Crow South repeatedly exposed to hateful and racist violence. One day, that violence hit particularly close to home for Perry’s mom. “I remember being a little boy, coming home and she was at home and [I said,] ‘what are you doing at home, you’re supposed to be at work?’” Perry explained. “She was in tears that day and she said, ‘There was a bomb threat.’ And she couldn’t believe that someone wanted to blow up this place where she worked, where she took care of all these toddlers — it was the Jewish Community Center.”

The 51-year-old media mogul said he hoped others might choose to pass his mother’s lesson down to their own children. “In this time with the internet, and social media, and algorithms that want us to think a certain way — the 24-hour news cycle — it is my hope that all of us would teach our kids, and I want to remember: just refuse hate. Don’t hate anybody,” Perry said.

Perry was honored Sunday with the Jean Hersholt Humanitarian Award for his efforts to ensure families were fed throughout the pandemic. According to Good Morning America, Perry purchased groceries for thousands of seniors at more than 70 different stores in New Orleans and Atlanta in April 2020 and gifted 5,000 boxes of food and gift cards to families in Atlanta ahead of Thanksgiving.

While Perry received a standing ovation at the Oscars, his speech was also well-received on social media, with celebrities like Oprah and Hugh Jackman committing to meeting the award-winner in the middle.

“Thank you for your inspiration, thank you for all you do, thank you for your leadership,” Jackman said in a video tweeted to Perry early Monday. “I’m literally, hopefully, going to meet you in the middle. Let’s break bread that I will break and let’s talk about how we can get stuff done because it’s astonishing what you are doing and you’re an inspiration.”

More Like This
Ryan Reynolds Jokes His Daughters Are So “Wild,” He Thinks “They Have Rabies Sometimes”
Ireland Baldwin Shares Her Abortion Story In An Emotional TikTok
Chris Pratt Says He "Cried" About That "Healthy Daughter" Instagram Post Controversy
Ben Affleck’s 10-Year-Old Son Samuel Test Drove A Lamborghini Right Into A BMW