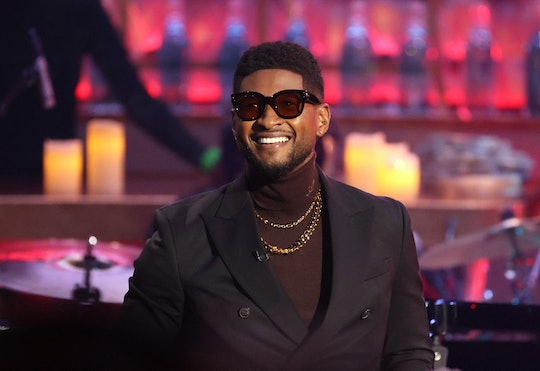 The Usher Raymond dynasty has grown by one more with the addition of his latest heir to the throne. The R&B superstar and his girlfriend Jenn Goicoechea have welcomed an adorable baby boy and gave their newborn a very regal name.

“Hear me roar … A.K.A Ra Ra,” the proud new dad wrote in an Instagram post shared Tuesday along with a sweet black-and-white photo of his new son, Sire Castrello.

In the caption, Usher also revealed that Sire arrived on Sept. 29 weighing 7 pounds, 13 ounces. The new baby joins his 12-month-old older sister, Sovereign Bo, whom Usher also shares with Goicoechea. The “DJ Got Us Fallin' In Love” singer also shares sons Naviyd, 12, and Usher V, with his ex-wife, Tameka Foster.

Usher seems to want to assure his children carry names that demand respect and authority. After all, “sire” is a form of addressing kings in Europe and Sovereign is a form for addressing the reigning queens. And Castrello means “Little Fortress” in Spanish, according to Baby Names, so little Sire is starting life with one powerful name.

The “Bad Habits” singer told Extra that his daughter is definitely living up to her name. “So Sovereign… is such a beautiful word and name to me,” he told Extra back in May. “You know, a supreme ruler is obviously the defined name… She’s definitely ruling the household, but Sovereign Bo Ray — Bo is at the end of it, so she’s my little reign-bo.”

The “Confessions” singer loves the growth of his family, as he shared with Good Morning America earlier this year, shortly after announcing Goicoechea’s pregnancy with Sire. “I’m definitely enjoying this little baby boom of ours,” the 42-year-old superstar said. “This new addition to the family has just been exciting.”

The Grammy-award-winning singer is currently headlining his Las Vegas residency at The Colosseum at Caesars Palace through Jan. 1. But although Usher is one of the greatest performers and R&B singers of all time, fatherhood is a natural talent he said he was made for. “I’m a dad, first and foremost,” he told Blackdoctor.org in 2014. “Of course I have to travel and make a living, but my sons are my priority….I never knew I could be so happy just hanging out with them. I was born for this.”