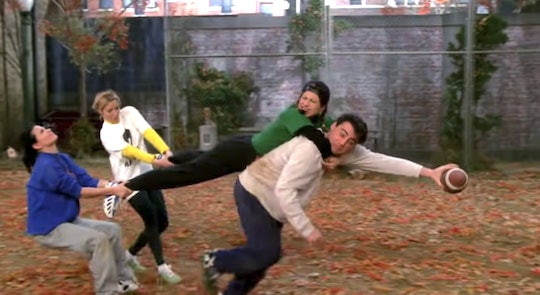 Here's How To Watch All 10 Of The Friends Thanksgiving Episodes

They'll be there for you this Turkey Day

Is Thanksgiving really Thanksgiving without Ross, Rachel, Monica, Chandler, Phoebe, and Joey? No, no it is not, which is why you need to watch all the Friends Thanksgiving episodes this holiday season. At this point, the holiday episodes are iconic. Who doesn't remember the time when Monica put a raw sunglass-wearing-turkey on her head in an effort to cheer up Chandler? Or when Chandler locked himself in a box to prove his friendship to Joey? Whether you're looking for something to watch while you prepare your famous Thanksgiving sides or just need something to fall asleep to during your post-feast nap, watching all 10 episodes (or even just a few) is simple.

There are 10 Friends Thanksgiving episodes.

You can stream every Friends Thanksgiving episode on HBO Max.

In case you missed it, Friends left Netflix at the beginning of 2020 and calls HBO Max home now. You can find all 10 seasons of Friends currently streaming on HBO Max. You will, of course, need an HBO Max subscription to watch. A basic subscription costs $9.99 a month, with ads, while an ad free version will run you $14.99 per month.

The episodes could also air on TV.

If you don’t have HBO Max, you might be out of luck. Although select Friends episodes aired on Nickelodeon's Nick at Nite nighttime programming block last Thanksgiving, the network has not yet announced if they will be doing the same this year. However, TBS does air episodes of Friends at random times throughout the day, so it’s very likely that the Thanksgiving episodes will be airing on TBS on Thanksgiving.

Although you might not have been able to have your own Friendsgiving with your friends this year, watching these Friends Thanksgiving episodes is pretty much the next best thing. Spending Thanksgiving with Monica, Chandler, Joey, Ross, Rachel, and Phoebe sounds like pretty great company to me.

More Like This
The 20 Most Romantic Quotes From Friends
35 Parks & Recreation Love Quotes To Send Your Boo Or Bestie
Galentine’s Quotes For Your Friends, Because Love Goes Beyond Romance
'1923' Will Deliver More Dutton Family Drama In Season 2 Of The 'Yellowstone' Prequel
What Parents Are Talking About — Delivered Straight To Your Inbox

This article was originally published on November 19, 2020