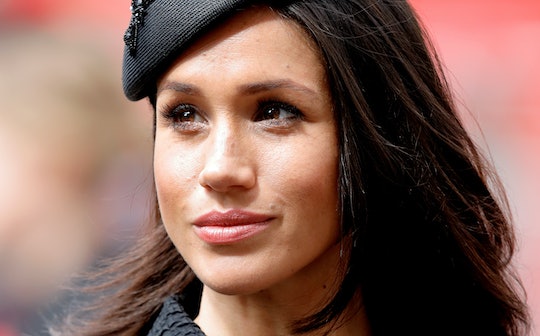 The Duchess of Sussex is reportedly making arrangements to mourn him privately.

When the Duke of Edinburgh is laid to rest at Windsor Castle on Saturday, just 30 close family members will be in attendance at his funeral at St. George’s Chapel due to COVID-19 restrictions. While Prince Harry, grandson of Prince Philip, is already in the United Kingdom to attend his grandfather’s funeral, his wife Meghan Markle will not be joining him.

The Duchess of Sussex will instead remain at the couple’s home in Montecito, California with their nearly 2-year-old son Archie in adherence to her doctor’s orders. She is currently expecting their second child, a baby girl, and Buckingham Palace said that she’s been advised by her doctor to stay home for health reasons. She will, however, be able to watch the funeral via live stream along with other members of the royal family who will not be in attendance, according to a statement from Buckingham Palace shared with The Sun. Markle is expected to make “private arrangements to remember the Duke of Edinburgh” at her home, the publication reported.

A senior palace official told The Sun that Markle made “every effort” possible to join her husband for the journey back to the United Kingdom for the funeral, and Queen Elizabeth “understands” why she couldn’t travel. Markle reportedly did express her condolences to her grandmother-in-law after she found out the Duke of Edinburgh had died at the age of 99 years old last Friday. She also joined her husband in paying tribute to Prince Philip in the hours after his death, writing on their Archewell website, “In Loving Memory of His Royal Highness The Duke of Edinburgh, 1921-2021. Thank you for your service... you will be greatly missed.”

While Markle is at home in California, her husband is currently self-isolating at their Frogmore Cottage home in Windsor, according to Hello! Magazine. He will join members of his family in paying respects to his grandfather on Saturday, walking in the funeral procession behind the Duke of Edinburgh’s casket along with his father Prince Charles and brother Prince William. While Prince Harry has stepped away from his senior royal role, he remains a loving member of the royal family and took the time to remember his grandfather with a lovely message on the Archewell website that read in part, “My grandfather was a man of service, honour and great humour. He was authentically himself, with a seriously sharp wit, and could hold the attention of any room due to his charm — and also because you never knew what he might say next.”