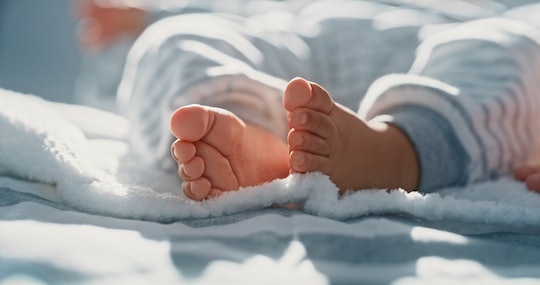 It’s the first time recommendations have been updated since 2016.

The American Academy of Pediatrics (AAP) released an updated set of safe sleep guidelines for the first time in six years. While many of these recommendations remain unchanged from 2016, the overarching theme appears to be this: Babies need to sleep on their backs, alone.

Every year, 3,500 babies die of sleep-related causes in the United States, according to statistics from the Centers for Disease Control and Prevention (CDC). These causes include Sudden Infant Death Syndrome (SIDS), accidental suffocation, and deaths from unknown causes. The AAP notes that following safe sleep recommendations can potentially reduce Sudden Unexpected Infant Death (SUID) fatalities. In an effort to keep babies safe while they sleep, the AAP released updated guidelines and here’s what the group recommends.

While this recommendation remains the same as the last set of official guidelines, released in 2016, the main difference in the new guidelines is the acknowledgment that bed-sharing does happen. “The AAP understands and respects that many parents choose to routinely bed share ...” the guidelines read. “However, based on the evidence, we are unable to recommend bed sharing under any circumstances. Having the infant close by their bedside in a crib or bassinet will allow parents to feed, comfort, and respond to their infant’s needs.”

“We know that many parents choose to share a bed with a child, for instance, perhaps to help with breastfeeding or because of a cultural preference or a belief that it is safe,” Dr. Rebecca Carlin, an assistant professor of pediatrics at Columbia University and co-author of the AAP guidelines, reiterated in a news release. “The evidence is clear that this significantly raises the risk of a baby’s injury or death, however, and for that reason AAP cannot support bed-sharing under any circumstances.”

It can be difficult to change this habit, particularly if bed-sharing is part of your family history and you and your baby have already developed a routine, but the AAP is strongly urging parents to put their baby in their own bed.

Keep them in your room, but in their own crib.

“A great way to test if a surface is too soft is to press your hand down and then lift it up. If your hand leaves an indentation, it's too soft,” Allison Johnson of SIDS education non-profit First Candle told CNN.

Don’t put anything in their crib with them.

Babies need to sleep on their backs on a firm, flat sleep surface. Bare of any extra decorations or blankets. “It is recommended that weighted blankets, weighted sleepers, weighted swaddles, or other weighted objects not be placed on or near the sleeping infant,” the AAP guidelines note. Instead parents and caregivers should consider wearable blankets to keep babies warm rather than soft bedding that could potentially cause suffocation. This means no crib bumpers, no stuffed toys, no extra blankets or pillows. Hats and head coverings should also be removed to avoid overheating.

In 2019, lawmakers introduced the Safe Sleep for Babies Act, which President Joe Biden signed into law in May 2022, in an effort to prohibit the sale of infant sleep products “with an inclined surface of greater than 10 degrees that is intended, marketed, or designed to provide sleeping accommodations for infants up to one year old.” This initiative came after dozens of infant deaths were attributed to these inclined sleepers, prompting several recalls at the time.

These sleepers are also called baby nests, docks, pods, loungers, rockers, and nappers, per the AAP, and any product with more than a 10% incline should never be used for sleeping babies. The incline can restrict a baby’s airway because of the chin-to-chest position and suffocate them. The same holds true for letting babies sleep in car seats, infant slings, and carriers. Once your baby falls asleep, move them to a flat surface.

There are monitors on the market that advertise the ability to reduce the risk of SIDS-related issues. These monitors, also called home apnea monitors, purport to track breathing and heart rates of sleeping infants and are marketed as sleep aids for babies. Some have pads that fit under a mattress, some are sensors attached to a baby’s body via a sock or around the waist, and will sound an alarm if the baby’s heart rate lowers or a change in breathing is detected. Due to a lack of data, the AAP says that a “family’s decision to use monitors at home should not be considered a substitute for following AAP safe sleep guideline.”

“There are no data that other commercial devices that are designed to monitor infant vital signs reduce the risk of SIDS,” the AAP notes.

While every parent needs to make their own choice about breastfeeding, studies have shown that breastfeeding can reduce the risk of SIDS. If possible, the AAP encourages parents to breastfeed exclusively for the first six months “unless it is contraindicated or the parent is unable to do so.”

The AAP’s new recommendations are meant to keep babies as safe as possible. And that’s what everyone wants.

You can read the full set of guidelines here.

Editor’s Note: This article’s section on the AAP’s stance on bed-sharing has been updated.

More Like This
How To Dress Your Baby For Sleep In The Summer
The FDA Is Warning Parents To Not Use Baby Neck Floats After One Infant Died
Should You Swaddle Your Baby In The Summer? Here’s How To Dress Them
Here's What The Law Says About Lighting (Or Even Carrying) Fireworks In The Park

This article was originally published on June 21, 2022