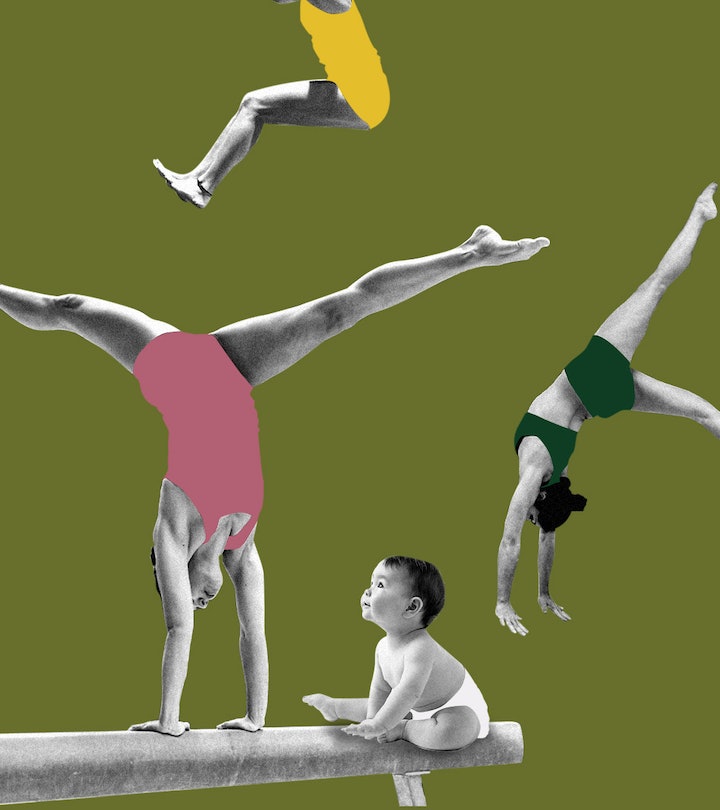 Adult Gymnastics Brought Me Back To Myself

I didn’t want to be a tiger mom. I wanted to be the tiger.

What did you do for fun during the height of the pandemic, when everything was closed and none of us were vaccinated? As for me — a 40-year-old woman with two young kids — I’d pull out the two-toned blue panel mat I’d very recently ordered from Tumbltrak.com, a gymnastics equipment company, “dedicated to helping young athletes TRAIN SMART.” I’d unfold it in our living room, the only room in the house large enough for it, and after a brief warmup, I’d try to recreate moments from various UCLA gymnasts’ floor routines.

I’m what you might call a serious gymnastics fan. And us serious fans (also known as, mostly to ourselves, The Gymternet) love college gymnastics. College gymnastics is where elite gymnasts go to heal (emotionally, if not physically). At elite competitions, the gymnasts' lips are straight lines across their faces, their shoulders: sunken. When they hit a routine, the celebrations are minimal. Maybe they smile. Maybe they get a side hug from a coach. But what you won’t see is a young, self-possessed woman beat her chest with her fist after a stuck vault and then jog into the arms of her teammates. No. For that, you will have to switch over to the NCAA version. And when it comes to self-possession, in my opinion, no team does it better than UCLA. Watching these young women, I often forget that they’re half my age.

But as a kid in the 90s, all I knew was elite gymnastics and the stars of the moment: a tiny Shannon Miller and an even tinier Kerri Strug. I quickly absorbed that to be good at the sport, you had to be small and serious. Check and check. But at that time, I lived in rural Pennsylvania. My “gym” was a YMCA basketball court. We set up the shoddy equipment and broke it down every single session. I didn’t realize this was outside of the norm until my parents divorced and my mother moved to Pittsburgh, where I enrolled in a fancy, dedicated gymnastics gym. It was beautiful but also a shock. I could see plainly that the girls my age were doing gymnastics at a much higher level than we were at the Y. I felt a bit like Danny Devito’s character in Twins: “You’re telling me that I’m the crap?”

I ended up quitting the sport a few years later. My adolescent understanding of the world told me that I was too late. I still loved the sport, but the other 14-year-olds at the Pittsburgh gym were so much better than me. It felt too embarrassing to keep trying.

According to psychiatrist and founder of the National Institute for Play, Stuart Brown, I was exactly on track — what Brown calls play deprivation tends to set in just as humans hit adolescence. But before I discovered Stuart Brown’s research, I had to become someone who was confused enough to seek out books that investigated the concept of play; I had to become a mother.

I didn’t want to be a tiger mom. I wanted to be the tiger.

In a move every other parent in the span of history saw coming, motherhood changed me. Starting with pregnancy, when, for the first time in my life, I didn’t feel like my body was an object I needed to keep in check. At the same time, coincidentally or not, I was falling deeper and deeper into gymnastics fandom, regularly listening to a gymnastics podcast, which became my introduction to NCAA gymnastics, i.e. gymnastics performed by women who presented much less as automatons and much more as people.

But motherhood also changed the way that I related to these gymnasts. I was both inspired by what they could do with their bodies but also worried for them, as if I were their mother. After Kyla Ross graduated college, what was she going to do with her exquisite precision and clear-eyed ambition? I couldn’t imagine another sport or hobby giving her half the satisfaction as gymnastics.

With the arrival of my second son at the beginning of 2016, this question became more personal. My second baby was so different from my first. I was different, too. Everything was harder. We didn’t have enough money for regular childcare. And the more I struggled, the more I felt I needed an outlet, a place to play, to exert myself. This is right around when I began working on a novel, tentatively titled Wildcat. I couldn’t put these themes together as I was living it, but now it seems so obvious to me that I’d realized I could not pour my personal ambitions into my kids. I didn’t want to be a tiger mom. I wanted to be the tiger.

The way that Ohashi worked the beam, I realized, was how I wanted to work my life.

At the beginning of 2017, with a 1-year-old and 3-year-old, my attempt to cope had gotten as far as a few therapy appointments and Googling “adult gymnastics Los Angeles.” But I also took myself and the 3-year-old to my very first UCLA gymnastics meet. That year, their team consisted of so many ex-elites: Kyla Ross, Madison Kocian, and Katelyn Ohashi, to name a few. Ohashi’s viral floor routine caught fire on the internet that year, and while I loved that routine, it was the way she held herself on beam that most impressed me. On beam, you must believe. You must be relaxed, but also like a predator. Anything less and it shows. The way that Ohashi worked the beam, I realized, was how I wanted to work my life.

By this point, I was deep into a draft of what would become Wildcat. I was also reading a lot about motherhood, and it was Brigid Schulte’s Overwhelmed: Work, Love and Play When No One Has the Time that led me to Stuart Brown. “Men tend to maintain at least a semblance of play through sports… either actively playing or watching it," Schulte wrote, citing Brown, "Women tend to lose it entirely.”

Yes, I thought and looked around me at all the women in my life not playing. And then I thought of my childhood self, striving so hard to be a good gymnast. I have a janky Hi8 video of my last competition. Watching it as an adult, I see so many similarities to those elite gymnasts I’d been obsessed with—not in my skill, but in my body and face. I am so tiny, under 100 pounds and still pre-pubescent. I look serious, worried. I look the exact opposite of self-possessed. World-possessed? Which is maybe not a word, but it rings true. I look like someone with absolutely no inner-authority, like a life-sized wind-up doll designed to look “concerned.”

But a few months after that initial UCLA meet, I finally showed up to an adult class. It didn’t take long until I was going every week. And then twice a week. Now it’s five years later. My kids are 6 and 8, and I’m still going.

At 40, I’m post-pubescent, postpartum. I’m about 50 pounds heavier than I was then. Much of it is muscle.

When I tell people that I do adult gymnastics, I think they must picture me doing some sloppy cartwheels across the floor. But if the person shows any genuine curiosity, I might pull out my phone and show them a video of me doing a round-off back handspring into a double back. OK, so I’m doing all this on a long trampoline called a Tumbl Trak (TRAIN SMART), but still: people are usually surprised when they see this. “Oh, OK. You are a gymnast,” is the look I seem to get.

I am a gymnast.

But so different from the teenaged version in that Hi8 recording. Comparing the two is like night and day, like elite and NCAA. At 40, I’m post-pubescent, postpartum. I’m about 50 pounds heavier than I was then. Much of it is muscle. I don’t look like you could knock me over with the wave of a hand. But look even closer and you’ll see something else. I’m no Katelyn Ohashi, but I’m assured. I’m smiling. I’m maybe not healed, but I’m on the road—or at least, the trampoline. I’m an adult woman who is playing. I’m a tiger / mom.

Amelia Morris’ novel, Wildcat, is available to order on Bookshop.