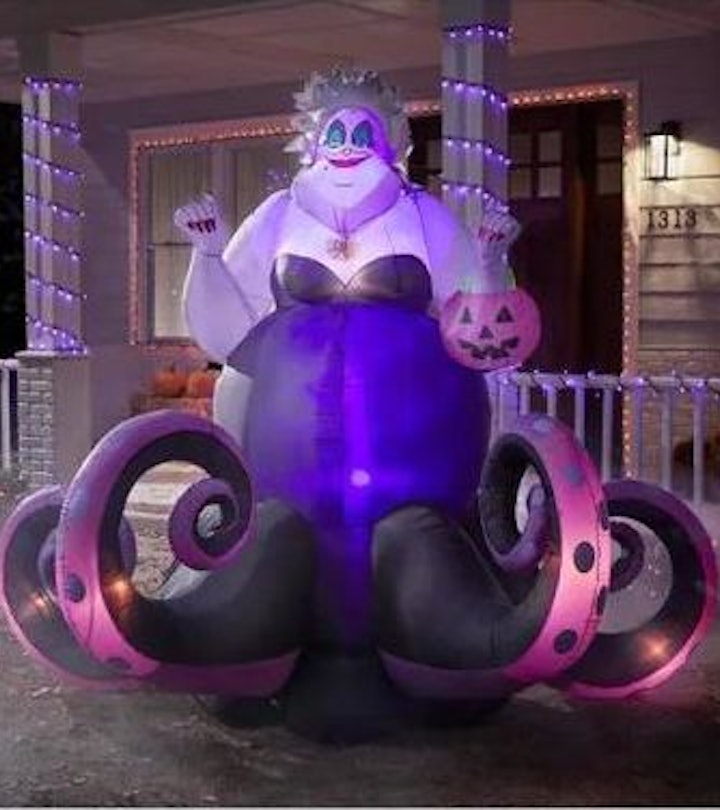 You *Need* This Inflatable Of The Villainous Sea Queen ASAP

She’ll for sure scare trick-or-treaters — don't underestimate the importance of body language.

OK all you “poor unfortunate souls,” have I got some good news for you during this period of doom and gloom from a lingering pandemic. One of Disney’s best villains (in my humble opinion) is at The Home Depot near you in all of her 6-foot glory. The animated Ursula Airblown Halloween Inflatable is here — though I’m not sure why they’re calling it a “Halloween” inflatable. I’m putting her in my yard right now as a permanent fixture. Solicit me now, jerks. "If you want to cross the bridge, my sweet, you’ve got to pay the toll.”

Ursula deserves a permanent spot not only in my yard, but in all of our hearts, because not only is she a safe villain to love (unlike Cruella Deville — which, can we talk about why we got an origin story about someone who wanted to skin puppies?), but she’s just a bad*ss who was trying to teach Ariel a lesson in self-worth and not selling herself out for a man. In fact, a Buzzfeed article even goes on to state, “She understands the expectations imposed on women. ‘It's she who holds her tongue who gets her man,’ she tells Ariel as she convinces the teen to give up her voice, and we are meant to forget that the movie proves Ursula is right: Eric does fall in love with a silent Ariel.”

Boom. So clearly, you really should honor this glorious woman, er, octopus, all year round. And it’s an easy set-up to boot — Ursula is self-inflatable, includes stakes and tethers, and she holds up well to outdoor conditions, per the product description. I mean, of course she holds up. It’s Ursula. Wind and rain won’t get her down, unless it’s accompanied by a boat with a really sharp bow at the front of it being driven by a prince which goes directly into her heart. RIP, Queen.

She’s even holding a little purple pumpkin bucket for Halloween candy, y’all. Her tentacles move, and her belly even lights up with a blue swirly light while wearing the iconic seashell necklace containing Ariel’s voice. And her iconic long red fingernails, reminiscent of my southern Memaw’s, are a nice contrast to her pale white skin.

So hurry up and grab your 6-foot inflatable Ursula from The Home Depot. Because you mustn’t lurk in doorways — it’s rude and one might question your upbringing.