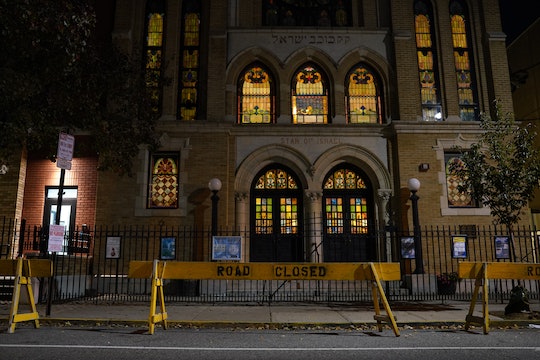 Antisemitic threats posted on an online forum known for extremists prompted the FBI to urge Jewish families to be on high alert.

On Nov. 3, the FBI’s Newark, New Jersey office issued a statement on Twitter about “credible information of a broad threat to synagogues” in the state. “We ask at this time that you take all security precautions to protect your community and facility,” the agency wrote. “We will share more information as soon as we can. Stay alert. In case of emergency call police.” While the individual who issued this online threat has been identified (though not publicly) and interviewed by the FBI, according to reporting from CNN, the threat of violence has shaken the Jewish communities of New Jersey and the country.

Dov Ben-Shimon, CEO of the Jewish Federation of Greater MetroWest NJ, told the Washington Post that his organization alerted leaders in the community, which represents more than 90 synagogues in north-central New Jersey, to implement heightened security measures in response to the FBI warning. On Twitter, writer and producer Bess Kalb shared a screenshot of a warning sent by a Jewish preschool notifying parents of the threat. “Hey I know antisemitism feels like last’s week’s news but this is an email [from] my friend’s son’s preschool,” she wrote along side the screenshot. “The kids are not allowed to play outside tomorrow.”

On social media, many, including Jewish parents in New Jersey, expressed anger over this threat of violence and anxiety and fear about sending their child to synagogue or an associated school or attending weekly Shabbat services themselves.

The FBI has not announced the name of the individual responsible, nor whether they have been formally charged with anything, though the Bureau notes the person “no longer pose[s] a danger to the community.” New Jersey Attorney General Matthew Platkin praised the efforts of law enforcement and the response of Jewish communities for working together to remain vigilant and safe.

“Each and every law enforcement agency in New Jersey stood up yesterday to protect and communicate with our Jewish neighbors against hate,” he wrote in a Twitter statement on Friday. “From direct contact to synagogue leadership, to uniformed and non-uniformed police presences at places of worship, our State Police, federal partners, county prosecutor’s officers, local police departments, sheriffs and other law enforcement moved swiftly to protect synagogues and Jewish centers. While this immediate threat has been mitigated, we know that others may follow and we know that hate continues to fester.”

According to data tracked by the Anti-Defamation League (ADL), incidents of anti-Jewish assault, harassment, and vandalism reached an all-time high in 2021, with a total of 2,717 incidents of assault, harassment and vandalism reported to organization. This represents an average of more than seven incidents per day and a 34% increase year over year. In recent news, celebrities like rapper Ye and Kyrie Irving of the Brooklyn Nets have taken up anti-Jewish talk points that seek to perpetuate harmful stereotypes about Jewish people and communities. The Museum of Jewish Heritage–A Living Memorial to the Holocaust in New York City issued a statement (without naming names) regarding “public figures either [who have] expressed support for antisemitic material or made antisemitic comments.”

“History has shown us that silence allows antisemitism to foment, beginning with words and ultimately leading to violence and genocide,” the statement read. “Public figures must recognize that their words – whether spoken or shared on social media – carry significant influence and can lead to severe harm. They can influence a legion of fans and supporters to embrace similar tropes.”

More Like This
How To Help Families Affected By The Devastating Earthquake In Turkey & Syria
Florida Teachers With “Unvetted” Classroom Books Could Face Felony Charges
Michigan Right-Wing Group Wants To Erase LGBTQ+ Sex Ed
Teacher Shot By 6-Year-Old Student Told School He Had A Gun, Was Told To "Wait"
What Parents Are Talking About — Delivered Straight To Your Inbox