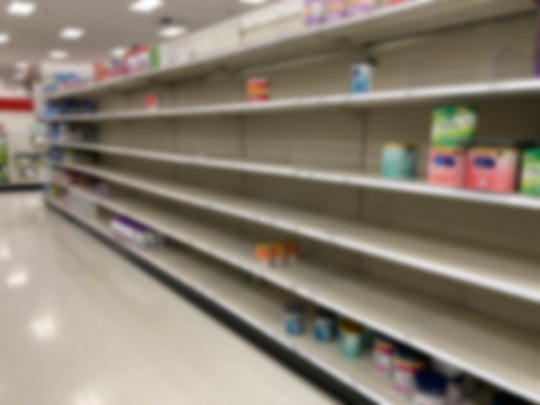 As if parents haven’t had enough to deal with over the past two years, there is now an alarming shortage of baby formula in the United States. Supply chain issues and recalls have led to an increasing lack of infant formula available for new parents in recent months, with a 31% out-of-stock rate reported in April and worsening in the weeks since. It’s a frightening time for parents who are trying to feed their babies, and there are quite a few takes on Twitter that need to be shut down once and for all.

There are many, many parents out there who are being affected by the shortage, especially now that the prices for formula are going up and becoming financially inaccessible across the country. Not every parent is able to breastfeed their baby for a variety of reasons, of course, but there are also plenty of parents who are exercising their right to make personal decisions about their own bodies and choosing not to breastfeed. There are adoptive parents, parents who have stopped breastfeeding and can’t simply turn their milk back on like a faucet.

Put simply, babies need to be fed and parents need access to formula they can afford. Yet, many have assumed that it’s not that big of a problem and have taken to Twitter to share their not-so-helpful takes on the situation.

Like one Twitter user who, rather than trying to find a solution for the formula shortage, has decided that all “pregnant moms need to plan now to breastfeed” whether they like it or not.

One person came up with their own clever idea that presumably no one had considered, “Breastfeed your babies, it’s free!”

Another somewhat condescending tweet noted that people shouldn’t be worried about the formula shortage because they “promise you there’s bigger problems out here.”

Another, while trying to help by offering skills as a “certified breastfeeding specialist,” also forgets a salient point: not every parent can or wants to breastfeed.

Another openly condescending Twitter user pointed out “mothers actually produce breast milk that is tailor-made for their infant.” Thanks for the heads-up.

If you’re wondering who is really behind this formula shortage, this Twitter user says it’s God trying to make moms breastfeed so now we know.

Another person felt that “if more women didn’t jump straight to formula because it’s ‘easier,’ then perhaps this wouldn’t be an issue.” They also shared a homemade formula recipe from 1960, which doctors have urged parents not to try.

This person didn’t exactly provide a recipe for homemade formula, but did let Twitter know that parents should “stop whining, it’s what these baby killers want.”

The formula shortage is a serious problem for parents and cannot be solved by a change in perspective. It’s a dire situation for parents and their babies who cannot simply switch feeding methods or formula or suddenly begin breastfeeding.

Instead of turning to homemade formula, which could potentially be dangerous, parents in need of formula should contact their pediatrician for assistance and consider reaching out to Feeding America or dial 2-1-1 to find a community specialist who can help.