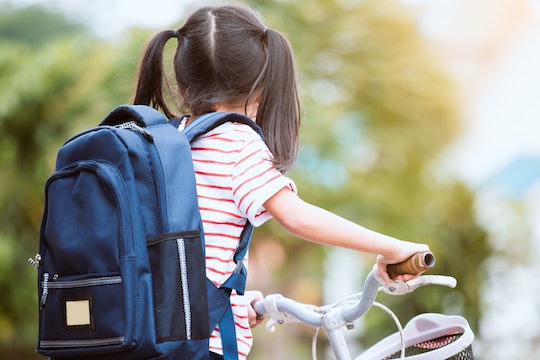 All Aboard The Bike Bus! Barcelona Families Love This Car-Free Initiative

“Something special is happening in Barcelona.”

Every Friday for about a month, residents of Barcelona can see a parade of children and families riding their bikes to school accompanied by the city’s Guàrdia Urbana. It’s called the “bicibús,” or “bike bus” and it’s gone viral on social media. The Barcelona bike bus has resonated with parents, cyclists, environmentalists, and even infrastructure nerds keen to keep cars off city streets.

The concept is simple. Riding bikes to school is healthy, fun, and better for the environment than driving or even taking a bus. But it can also be dangerous, especially for young riders in a big city like Barcelona, where cars typically rule the road. But there is safety in numbers. Every week, organizers publish a route and post it to social media, so that riders will know where to join the “bus.”

And it’s not just kids and official adult escorts, either. Parents of schoolchildren who participate in the bicibús are accompanying their children to school and then cycling on to their jobs and offices. “This is spectacular!” tweeted @guillelopez, a parent participant. “We have to make Friday the day everyone rides a bike to school and work. Bike by bike, let's get the city back!”

Zach Klein, whose Twitter thread on the subject has been liked nearly 20,000 times, explains that while the bicibús was supposed to be a two-week trial, due to popular demand, the Guàrdia Urbana has committed to providing an escort through the end of the year. In a tweet, @guillelopez emphasizes that police presence has facilitated the effort tremendously, but that the large number of riders has kept “hysterical drivers (cars and scooters)” from overtaking cyclists.

Though the bicibús in Barcelona’s Eixample neighborhood has been receiving the most attention, the idea is not new. Earlier this year, in the city’s the Sarrià district, dozens of children and families participated in a similar action. Other bicibús initiatives, like this one in Madrid’s San Benito neighborhood, or this one in Barcelona’s Colegio Montserrat neighborhood predate both by two years and seven years respectively. Multiple Twitter users, from Belgium to Ireland and even some cities in the United States, noted that similar initiatives that have worked well or that riding bikes as a regular mode of transportation is simply built into their culture.

“This looks amazing! And it’s a wake up call too,” tweets @ERvanPutten. “In the Netherlands the infrastructure is bike and pedestrian friendly to begin with. Almost everyone goes to school or work by bike if and when they can. We easily forget how unusual this really is!”

But though Eixample’s bicibús is not the first of its kind, it also won’t be the last; betevé reports that other Catalan cities – Vic and Sabadell – have also planned bicibús initiatives of their own, and that supporters around the world, from London to Melbourne, Brussels to Brooklyn, have expressed interest in following suit, for health, the environment, or just for the fun of riding a bike.

But Twitter user @ICannotBeliev10 saw an even more immediate benefit. “Could be an answer to our bus driver shortage.”

More Like This
Reddit Is Not Impressed With Dad Who Hid Neighbor's Gnome Because It Scared His Kid
Exclusive Eureka! Clip Introduces Star Of Disney’s New STEAM Preschool Series
'Squid Game' Is Coming Back For Season 2 On Netflix: Here’s What Parents Need To Know
Dads Share What Paid Family Leave Would Mean To Them In Heartwarming Video