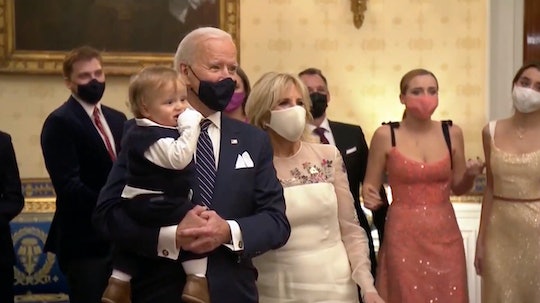 He's got his own crib and everything.

It's not even been a month and already the Biden administration looks significantly different from the last in so many ways. For instance, the Biden White House has a crib for baby Beau, President Joe Biden's grandson, just in case the sweet little boy wants to hang out with his grandparents for a sleepover or have a nap. They are the President and First Lady of the United States, after all, so it seems like he would be guaranteed excellent snacks at the very least.

In a recent interview with People, First Lady Dr. Jill Biden and President Biden opened up about what their lives will look like inside the White House. And it looks as though the Bidens are expecting to enjoy some family time with their grandchildren during their time there, including their grandson, 10-month-old Beau Biden, who is the child of their son Hunter Biden and named after the president's oldest son who died in 2015. Because being in the White House doesn't stop them from wanting to fulfill their roles as grandparents to their brood of grandkids, including granddaughters Naomi, Finnegan, Maisy, and Natalie Biden, as well as grandsons Hunter and Beau Biden.

With all those grandchildren, they'll be needing some sleeping space in the White House. But now that their granddaughters are adults and Robert is 14 years old, their old sleeping situation won't work. "We used to have two sets of bunk beds at home. (The grandchildren) outgrew them. Although we now have one little 10-month-old," President Biden told People. "So there’s a room with a crib!" Dr. Biden added.

As much as the Biden family will certainly be welcome for visits, kids and grandkids alike, Biden made it clear that, unlike President Donald Trump, no one from his family will be working in his administration. "We're going to run this like the Obama-Biden administration," Biden told the magazine. "No one in our family and extended family is going to be involved in any government undertaking or foreign policy. And nobody has an office in this place."

The Biden grandchildren aren't the only members of the family who will be enjoying fun times at the White House. After four pet-free years of the Trump Administration, the Biden dogs Champ and Major are on site and enjoying their new home. "Champ is enjoying his new dog bed by the fireplace and Major loved running around on the South Lawn," Dr. Biden told USA Today.

Grandbabies sleeping in cribs, dogs frolicking on the lawn, and no family members working in government. What a change in just a few short weeks.