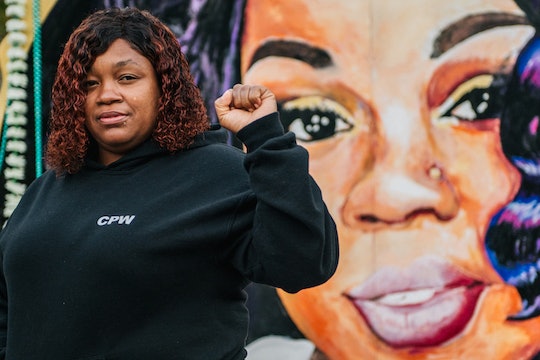 On Thursday U.S. Attorney General Merrick Garland announced that four Kentucky police officers had been charged in the deadly raid that killed 26-year-old Breonna Taylor two years ago. Ever since Taylor’s life was cut horribly short in March 2020, her mother Tamika Palmer has been trying to bring the people responsible for her daughter’s death to justice. And today, Palmer reacted to the fact that she could, at last, say her daughter’s killers had been charged.

He went on to say that Taylor, an Emergency Room technician, “should be alive today” and that he and other federal officials “share, but cannot fully imagine, the grief” felt by Taylor’s family.

The arrests of the four current and former officers has been a long time coming for Palmer. In March 2021, one year after her daughter’s untimely death, Palmer spoke to CNN about how she has struggled with the injustice of it all. She feels “Anger that it was so avoidable, anger that she lost her life for it,” she said.

Today, Palmer spoke out about the charges alongside her lawyer Ben Crump after the announcement in Jefferson Square Park in Philadelphia. “Today is 874 days. It’s long overdue.”

Palmer went on to say that she had been saying since the beginning “that they shouldn’t have been there.” And now everyone knows that she was right all along. The heartbroken mom opened up about a post her daughter had shared once, “Breonna wrote ‘Take me to a place I can’t even imagine.’ Breonna has taken us all to a place we can’t even imagine.”

When she was asked a year ago what justice for Taylor would mean to her, Palmer knew exactly what she needed: “to have these officers arrested and charged and convicted.”

Finally, 874 days later, Palmer’s call for justice has been served.