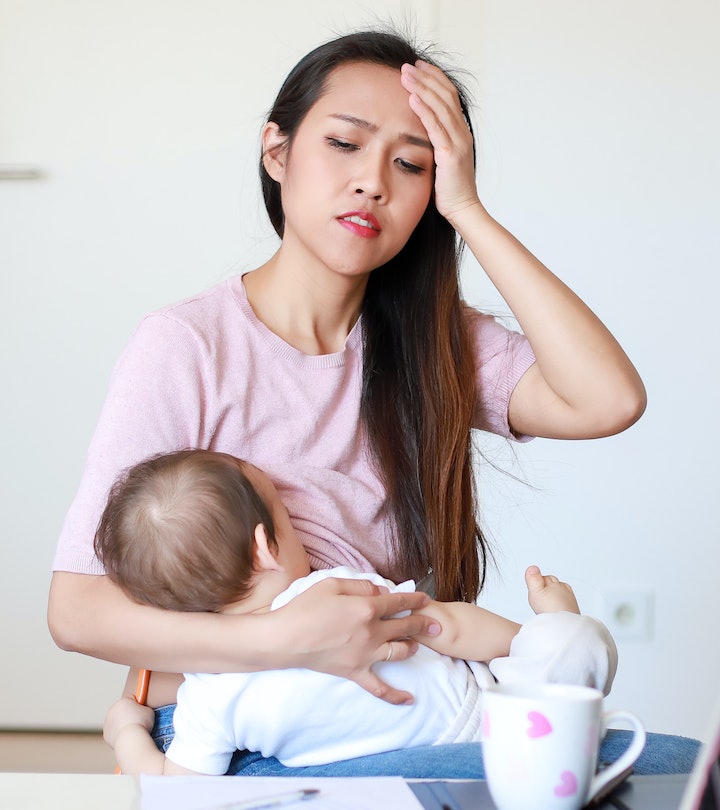 Can You Breastfeed If You're Hungover? Experts Explain

A lactation consultant explains how to know when to nurse after drinking.

If you’re a breastfeeding parent, then you’re likely already aware that breastfeeding your baby comes with its own set of guidelines to follow to ensure the safest and healthiest experience possible. One of the most well-known “rules” of breastfeeding is that alcohol consumption is discouraged. You probably already know that you shouldn’t drink heavily while nursing, but what about after drinking? At some point, many mothers will wonder if you can breastfeed while hungover, and it’s definitely a valid question.

Most doctors agree that the best thing for any nursing mother to do is to avoid beer, liquor, and wine if they know they’ll be putting the baby on their breast later on. According to official guidance from the Centers for Disease Control (CDC), avoiding alcohol is the safest option. The CDC notes that while moderate alcohol consumption (up to one drink per day) is not known to be harmful to infants, exposure to more than that through breast milk could be damaging to an infant’s development, growth, and sleep.

Should You Avoid Drinking Altogether When Breastfeeding?

This is obviously important guidance, but all of that being said, you don’t need to swear off all alcohol for the next few months (or even years) while you breastfeed. Romper spoke about this with Dr. Jessica Madden, board-certified pediatrician and neonatologist, International Board-Certified Lactation Consultant (IBCLC), and medical director at Aeroflow Breastpumps. “It is never safe to drink alcohol while pregnant, but it is safe to have an occasional alcoholic drink while breastfeeding,” Dr. Madden says. “One alcoholic drink is defined as a 12 oz. of beer, 5 oz. of wine, or 1.5 oz of distilled spirits. We know that there is no risk of harm to breastfeeding babies if their moms drink one-two alcoholic drinks per week.”

If you’re drinking more than that, many moms choose to “pump and dump,” which essentially means that they pump breast milk after drinking, then toss it instead of giving it to their little one. In the few hours after drinking, these moms will typically give their child milk they pumped before drinking, or they’ll supplement with formula, but this only needs to be done if you yourself are still feeling the effects of alcohol. “In general, if you are sober enough to drive, you are sober enough to breastfeed. Less than 2% of the alcohol consumed by the mother reaches her blood and milk,” noted the breastfeeding website KellyMom. Alcohol does not stay in your breast milk, just like it doesn’t stay in your bloodstream.

Should You Breastfeed When You’re Hungover?

OK, so it’s fine to get your drink on (to an extent) while nursing. But how long do you really need to wait before you can allow your baby back on your breast? Dr. Madden notes that it’s recommended for moms to wait at least two hours after each alcoholic beverage to breastfeed.

Basically, if you know you’re going to be drinking a lot, keep track of how many drinks you have and what time you have them, and then do the math from there. If you had, say, three drinks, and it’s been eight hours since your last drink, you’re probably in the clear to breastfeed — even if you do feel less than great. If you still feel tipsy or intoxicated, though, skip the breastfeeding.

There are other things to take into consideration when breastfeeding while hangover. Dr. Madden says that if you choose to nurse while you’re feeling hungover, “you should take special care to hydrate yourself, make sure not to bedshare with your baby — the fatigue associated with being hungover puts one at risk of rolling onto their baby while sleeping — and to also have someone else watch your baby so you can rest and recover.”

There’s no shame in a breastfeeding mom having a few drinks, but following these guidelines and waiting things out is really important. “If mothers breastfeed too soon after drinking, the alcohol can pass from mother to baby in milk,” Dr. Madden says. “This can cause babies to become drowsy, difficult to rouse, and to feed poorly.”

The CDC also notes that high levels of alcohol consumption can actually interfere with letdown. Excessive drinking over time can lead to a decreased milk production, and may cut your breastfeeding journey short. It can also affect the baby’s sleep patterns and early development.

Tips For Safely Drinking While Breastfeeding

While you should avoid getting very intoxicated any time you want when you’re a breastfeeding mom, you can still feel free to enjoy yourself. Keep these tips in mind:

Have a glass of wine once or twice a week if needed, go out and have fun sometimes — just be responsible at the end of the day, and you and your baby should be just fine!