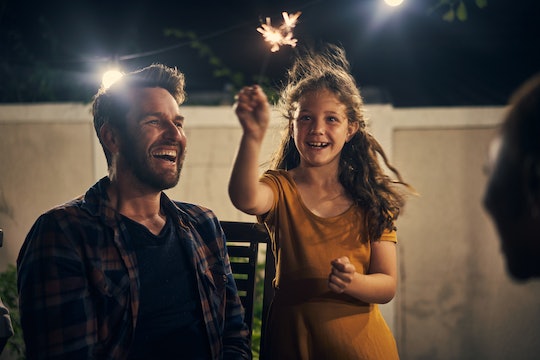 Can You Light Fireworks In Your Backyard?

Here's what the different states allow.

Especially as the Fourth of July nears, people across the country stock up on fireworks in the hopes of having their own backyard firework extravaganza. Whether you like sparklers, fountains, or bottle rockets, you're probably wondering if it’s legal to set off fireworks in your backyard on the Fourth of July — or really any time during the year? The answer to that depends on what state you live in, and what kind of pyrotechnic show you have in mind.

Are fireworks legal in all U.S. states?

“Backyard consumer fireworks are legal in 49 states plus the District of Columbia and Puerto Rico,” Julie L. Heckman, Executive Director of the American Pyrotechnics Association (APA), tells Romper. “However, municipalities may have more stringent regulations, restrictions or prohibitions, so always check local ordinances before engaging in fireworks activities. For more information on state fireworks laws see this guide by the American Pyrotechnics Association.” For example, Massachusetts bans the use of all consumer fireworks outright, and fireworks prohibitions vary for people in the other 49 states.

Can I light fireworks in my state?

Here’s when things can get even trickier when it comes to setting off fireworks in your backyard, or even anywhere in your own state. Some states only prohibit certain types of fireworks. For example, in Ohio, fireworks can be bought there but not used there, unless they are considered novelty fireworks. A novelty firework is defined as "a device containing small amounts of pyrotechnic and/or explosive composition but does not fall under the category of consumer fireworks. Such devices produce limited visible or audible effects. Examples are snakes, tanks, poppers, and snappers,” according to the APA.

Other states are far less restrictive when it comes to putting on your own personal Fourth of July light show. Wyoming, for example, doesn't specifically prohibit any type of consumer firework. It does make sense that states with denser populations, like Massachusetts, would have stricter rules on fireworks than a state like Wyoming, which is the least populous state in the nation.

However, Massachusetts does allow what the APA calls “display” fireworks if you go through these steps. You must have a permit and apply for one with the local fire chief at least 15 days before the display date, and have a certificate of liability insurance for $1,000,000 and bond for $15,000. You must also have a state license — which is valid for two years. The Bureau of Alcohol, Tobacco, Firearms, and Explosives (ATF) website also noted that “display” fireworks are the fireworks used in shows and are “generally under the supervision of a trained pyrotechnician.” (But the kind you set off in your backyard on a whim are still prohibited in the state.)

Can you set off fireworks in grass?

If your state does indeed allow you to set off fireworks in your backyard, it’s important to figure out the safety logistics and whether or not you could potentially set your yard or house on fire. If you’re like most people and your backyard consists of grass, you may want to rethink having the show directly in your backyard. It’s safest to shoot fireworks from a hard, fireproof surface, free from debris and away from buildings or people.

Plus, there are even more things to consider when setting off fireworks in your backyard on the Fourth of July.

The most recently updated report from the Consumer Product Safety Commission says that in the 2020 calendar year, an estimated 15,600 injuries related to fireworks were treated in U.S. emergency rooms. The report notes that of those injuries, adults 25 to 44 years of age experienced 35% of the estimated injuries and children younger than 15 accounted for 18%.

If you do decide you’re lighting fireworks at home, then here are some important safety tips from Heckman.

With a little prep work, as well as a careful reading of the specific fireworks ordinances in your part of the world, it’s possible to enjoy a safe and festive backyard fireworks display this Fourth of July.

More Like This
These Capri Sun Pouches Have Been Recalled Because They May Contain Cleaning Solution
2 Million MamaRoo Swings & 220,000 RockaRoo Rockers Have Been Recalled
Tips For Growing Pumpkins This Fall
Turn Heads This Halloween With These Sexy Costumes

This article was originally published on June 25, 2018