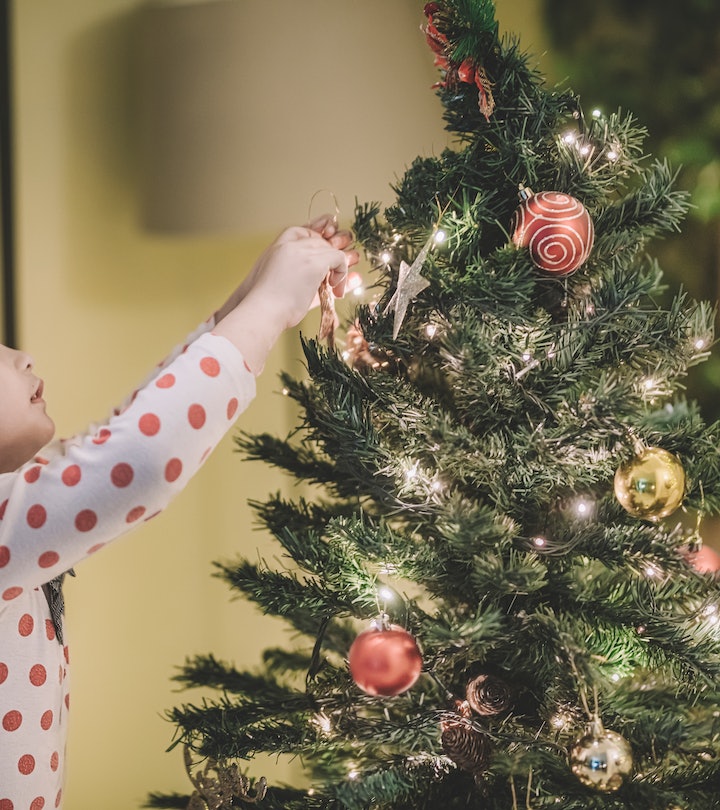 Should You Put Your Christmas Tree Up Before Thanksgiving?

Just do what makes you happy. Seriously.

Some debates will likely never be put to rest. They divide families, alienate friends, and keep you up at night questioning your own beliefs and those of the people around you. This time of year, deciding when to put the Christmas tree up is a hot topic. The question of whether you should or should not put a Christmas tree up before Thanksgiving is one that can make your Uncle Jimmy and Aunt Janice fight harder for their respective decorating stance than they do for the last drumstick on Turkey Day.

What’s wrong with putting up your tree before Thanksgiving?

For many families, Christmas decorations come out the moment Halloween decorations are put away. (Hi, it’s me.) For early November decorators, cooking the Thanksgiving turkey while listening to Michael Bublé croon "White Christmas" is perfectly natural — double the holiday, double the joy! On the flip side, there are those who find the juxtaposition of the two holidays to be downright disgraceful. They are not one mega-holiday; they are two distinct holidays, and should be treated as such.

Now, before you get up on your soapbox about savoring all that Thanksgiving has to offer, consider this: Good Housekeeping reported that putting up your Christmas decorations earlier makes you happier. If happiness has been harder to come by lately, why not grab a little extra this season? The original source for this report stemmed from an interview by UNILAD where psychoanalysts explained how decorating early for the holidays can evoke feelings of nostalgia in the brain's pathways that lead to happiness. Who can argue with the look of joy on the face of the Arizona mom surprised with a giant Christmas tree put up secretly by her husband pre-Thanksgiving? Pure. Happiness. If this is the result of decorating early, sign me up!

In the second camp, however, some argue that the decorations can wait until after your turkey is carved and consumed. After all, who wants a holly jolly tree to steal the thunder of a beautifully set Thanksgiving spread? (Again, me. I do.)

The Christmas decor debate has even been tackled by CNN in a quippy text exchange format published by two of the media outlet's writers. Delaney Strunk argued that the Christmas holiday "matriarch" Mariah Carey released her iconic tune "All I Want For Christmas Is You" in October, therefore decorating even "a full month before Thanksgiving" is acceptable. In a reasonable counterargument, AJ Willingham explained how red and green decor clashes with "the whole rustic Thanksgiving vibe." With a myriad of takes floating around the web, it's hard to know for sure which decorating direction to go in.

To tackle this divisive conversation headfirst, Romper asked people on both sides of the debate on social media to weigh in. For Colorado-based consultant Payahm Mansoori, the "holiday creep" is a slippery slope and has a track record for ruining holidays as it is. "It's way too early to be celebrating Christmas in November. It's a December thing," Mansoori tells Romper. "Holiday creep stinks. Just look at Black Friday. It used to be 8 a.m. after Thanksgiving, now it's Thanksgiving night and that sucks." (Although with so many Black Friday deals happening online and many stores closed on Turkey Day now, you could theoretically shop right from your Thanksgiving table without skipping a beat.)

But for some people, decking out that glorious Christmas tree pre-Turkey feast is more of a practical move. "It is a lot of hard work that goes into decorating for the holidays, so I want my effort to be worth it," Shelby Larkin, a graphic designer from Washington D.C., tells Romper. Plus, who doesn’t want to stare at something gorgeous for 60 straight days to close out the year?

Sometimes purchasing and decorating a Christmas tree has less to do with preference and more to do with money. Even though Good Housekeeping reported that historically, Victorian traditions dictated Christmas decorations be put up no sooner than a few days before the actual holiday, I'm personally stretched extremely thin financially after buying all of the food for Thanksgiving and purchasing Christmas gifts, so the tree goes up before Thanksgiving when we have a little extra dough to make it happen.

Mary Hicks, a mother of one from Northern California, argues that setting up the tree early only adds to the joy of Thanksgiving. "I don’t understand why people think having a Christmas tree makes you less thankful. It’s the season of being grateful, giving, trees, turkeys, time with others, it doesn’t matter how you celebrate these things," Hicks tells Romper. Personally, I’m super thankful for the beautiful tree in the corner of my living room right now.

The bottom line: Do what feels right for you

As you can see, this is a hot-button issue and people certainly have strong opinions on it. When it comes down to it, however, Kelsey Cotton, mama of two young daughters, sums it up best. "Honestly, I feel like people should do what makes them happy," she tells Romper. Whether that means having a massive Douglas Fir proudly on display at Thanksgiving dinner or waiting until Dec. 1 (or later) to trim your tree, that's a personal call you're going to have to make.

Fortunately, the rule is this: Do whatever you want. Embrace anything and everything that can bring even the tiniest bit of joy right now — even if it’s trimming your tree at midnight on Nov. 1. You do you, just do us all a favor and don't be a Scrooge about when others choose to put their tree up. (We’re all dealing with quite enough negativity in the world already, you know?) Here's hoping your Thanksgiving is as merry and bright — or not — as you want it to be.

This article was originally published on November 7, 2018