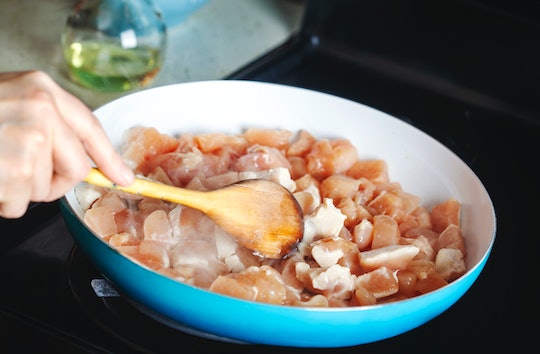 The FDA Is Worried People Are Cooking Chicken In NyQuil

“Sleepy chicken,” as you probably guessed, is a really bad idea.

Raise your hand if you had “NyQuil Chicken” on you 2022 bingo card? Nope, neither did we. While it sounds perhaps too bizarre to believe, the Food and Drug Administration (FDA) has had to caution the public against because of a supposed TikTok trend wherein people are apparently marinating their uncooked chicken in cough medicine like NyQuil to make some “sleepy chicken” for themselves. How did this bad idea even get started? Here’s what you need to know.

“NyQuil Chicken” started as a joke.

TikTok has become a real hotbed for off-the-wall and frequently dangerous trends. Now, the FDA is concerned that people marinating uncooked chicken in NyQuil, which contains acetaminophen, dextromethorphan and doxylamine, or a similar over-the-counter cold medication, in an effort to make themselves “sleepy chicken.” Why? Well, it actually all started as a joke years ago.

While the idea of cooking chicken in NyQuil seems to have gained traction in recent weeks, it actually first appeared on TikTok in a since-deleted post back in September 2020. Content creator Rob Flo made his sick wife “sleepy chicken,” he explained at the time. “I’ve done this in the past and I usually use four-thirds of the bottle,” the creator said in the video. “Season that NyQuil in there at just the right temperature.” While the video has since been deleted, NJ.com reports that it was a satire video. Additionally, TechCrunch reports that “NyQuil Chicken” can be linked back to a meme shared by a troll that circulated on 4chan in 2017.

But cooking cough medicine like NyQuil is enough of a concern that the FDA has gotten involved.

The FDA has called it a “recipe for danger.”

On Sept. 15, the FDA issued a lengthy warning against cooking chicken in NyQuil or any other over-the-counter cold medication. “A recent social media video challenge encourages people to cook chicken in NyQuil (acetaminophen, dextromethorphan, and doxylamine) or another similar OTC cough and cold medication, presumably to eat,” the warning begins.

“The challenge sounds silly and unappetizing — and it is. But it could also be very unsafe. Boiling a medication can make it much more concentrated and change its properties in other ways,” the agency added. “Even if you don’t eat the chicken, inhaling the medication’s vapors while cooking could cause high levels of the drugs to enter your body. It could also hurt your lungs. Put simply: Someone could take a dangerously high amount of the cough and cold medicine without even realizing it.”

This is not the first time over-the-counter cough medicine has been used in a dangerous social media trend. Two years ago, the FDA issued a dire warning about using Benadryl when there was an alarming surge in teens heading to the ER after consuming higher-than-normal amounts of the medicine as part of the “Benadryl Challenge.”

TikTok has stepped in as well.

While the social media platform has not released a statement about the FDA’s concerns, it’s worth noting that clicking on “sleepy chicken” several times on TikTok now reroutes users to a notice about disinformation. “Your safety matters,” the page reads with a link to resources. “Some online challenges can be dangerous, disturbing, or even fabricated. Learn how to recognize harmful challenges so you can protect your health and well-being.”

While it all started as a joke, hopefully no one else attempts this dangerous idea for laughs. But now you’ll be prepared if you do see your kid grabbing chicken out the fridge and NyQuil from the medicine cabinet. Shut it down.

More Like This
50 Mulled Wine Instagram Captions
"Corn Kid" Handed Out Over 40,000 Cans Of Corn At A Food Bank Ahead Of Thanksgiving
Hero Who Tackled Colorado Gunman Was At Nightclub With Family To See Drag Show
20 Holiday Gifts For Neighbors They’re Sure To Love