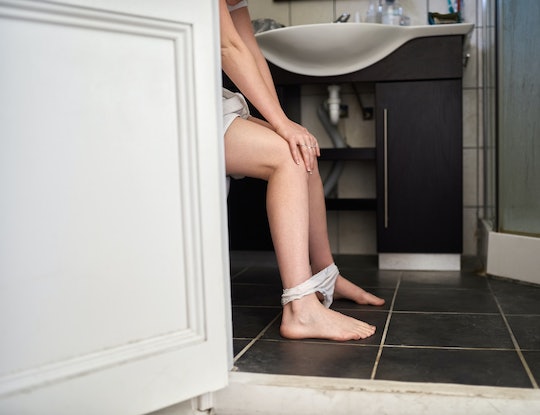 And having conversations on the toilet, according to a new poll.

There was a time in history when lords and ladies were unfailingly private about their bathroom habits. If they could go about their business in separate wings of their homes to protect each other's delicate sensibilities, so be it. No longer. A new study of 2,000 Americans living with a partner found that couple's bathroom habits during quarantine have really become boundary-free. Or boundary relaxed, I suppose. It's not a no-holds-barred situation, but it's rounding the corner.

The study, which was commissioned by Natracare and conducted by OnePoll, culled through responses from the 2,000 adults who have been living with a partner throughout the pandemic to find out where their relationship sits, bathroom-wise. And, according to the poll, 64% of Americans who took part in the survey believed their personal bathroom boundaries had lessened since quarantine. The survey found that 70% of respondents had peed in front of their partners, while 25% admitted to pooping in front of their partners.

There is still one boundary 31% of respondents are not ready to cross just yet: talking while they're on the toilet, though their partner is. They're willing to talk about the toilet while off the toilet, however. Around 50% of people said there had been disagreements over what waste should or should not be flushed. Leading me to believe that everyone needs a refresher course in that old adage, "If it's yellow, let it mellow. If it's brown, flush it down," because 50% of people also argued over clogged toilets.

So this is where we are, pandemic-wise.

To be fair, it's not as though bathroom arguments never happened pre-pandemic between couples. Last January, one particularly heated bathroom debate really struck a chord on the internet when an exhausted mom admitted she turned off the Wifi every time her husband went in the bathroom to poop because she figured he was hiding from his parenting duties. Romper even reached out to some experts at the time to find out why husbands take so long to poop, with relationship expert Toni Coleman explaining that the bathroom is often seen as a "safe zone" in the household.

"This can be a habit picked up in childhood, something modeled by a parent, a way he used to get alone time or avoid unpleasant family interactions or dynamics, a way to avoid work, or avoid a parent that was unreasonable and demanding," Coleman said. "The bathroom is the one place we feel reasonably sure no one will intrude on our privacy, so it provides a great escape for someone searching for one."

Not any more, apparently, which might be for the better. While the bathroom is the worst space in the house to share for around 60% of respondents who took part in the survey, that same number of people also admitted that getting past the taboo of bathroom boundaries has strengthened their relationship.