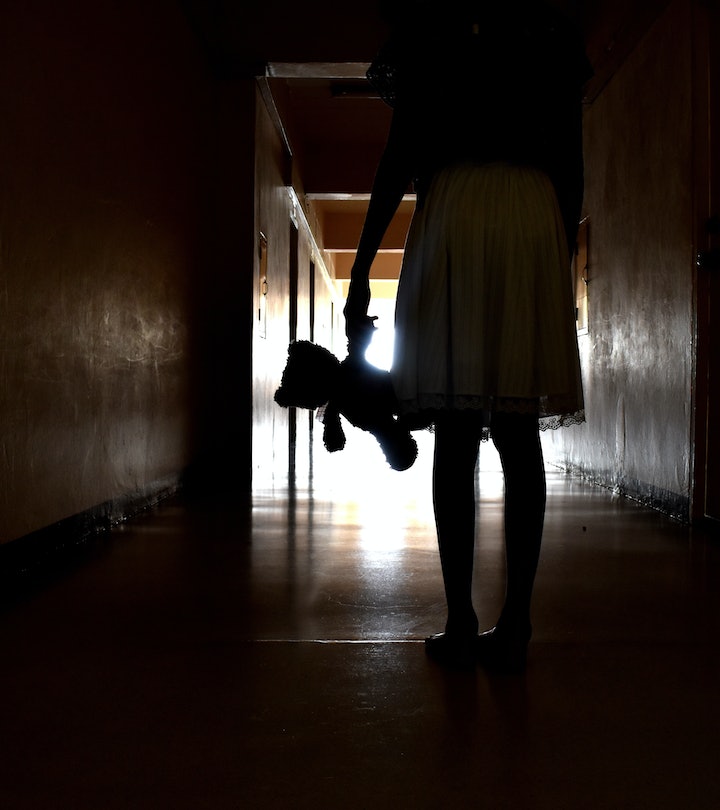 These Toddlers Told Their Moms About Their Past Lives, Ghost Grandmas, & More

Out of the mouths of babes, as they say.

Children are said to have a strong connection to the supernatural, which tends to get weaker and disappear as they grow up. While some may say it’s just because their imagination gets a little tamer, there are those who believe what their kids have to say about the spooky things they say. After reading these tales of dearly departed, past lives, and otherworldly creatures, you might just become a believer yourself. Or you might just be extra convinced that kids honestly say some really creepy stuff.

A Visit From Mimi

“Right after our grandma passed, my daughter Peyton would look past us and say, ‘Mimi,’ and point. We realized later she was trying to say ‘baby,’ but at the time we thought Mimi was hovering around hard.” — Ashley, mom of three

“We were reading bedtime stories and I heard something move in my son’s room, and he asked did I see the shadow people, and I said no. Then he told me the shadow people in his room were nice and weren’t there to hurt anyone. He was 2 at the time.” ­— Jessika, mom of two

“All of a sudden, Brady is terribly afraid of the dark, so one night I went into his room and asked why he was crying. He said he was scared because of the ghosts. I told him there were no ghosts in his room. He pointed to the corner and said, ‘There’s a ghost right there. The ghost hurts you.’ Not gonna lie, it freaked me out a bit.” — Kristen, mom of two

“At a beach house we rented, our 2-year-old suddenly sat up in the middle of the night between my husband and I and said, ‘Hey, where did that man go?’ We thought he was dreaming so we laid him back down and went to sleep, but the next day, walking through the living room, he stopped and pointed at the glass doors leading to the balcony and said, ‘Oh! There’s that man.’ So. Creepy.” — Kaitlyn, mom of one

"Elijah’s first written word was, ‘Helen,’ my mother-in-law’s name. He wrote it just about an hour before we found out she had passed earlier in the day." — Cat, mom of two

“My parents babysat my youngest daughter when she was a toddler. When she would wake up from naps, she would tell her grandmother, named Rita, about her Grandma Alice, who lived in their house. There was no one in our family named Alice, let alone an Alice living in my parents’ house. I tried to ask her about Grandma Alice but she would never tell me more, and she never talked about her again after they moved out of that house.” — Terry, mom of two

“In April 2014, my Oma (grandmother), who was 83 at the time, passed away. My youngest son, Rance, was just 3 years old then, and had never been particularly close to her. She was put on oxygen full-time shortly after he was born, and something about the tubes and tanks had always made him even more stand-offish than he normally was with everyone else. He never said her name as far as I can recall. It’s important to mention his apprehensiveness around her, because for me, it makes what happened after she passed even more bizarre.

About four days after she passed, I put Rance in his stroller and set out around 9 a.m. for a walk around the neighborhood. It was bright and sunny, and we were the only ones out walking that morning. We were about 10 minutes into our walk when Rance sat up and started pointing at the end of the road, towards a retention pond, and said, ‘That’s grandma! That’s Oma!’ It was loud enough and clear enough that it stopped me dead in my tracks. I walked to the side of the stroller and crouched down to try and see what he was looking at, thinking maybe he had just seen an older neighbor that I hadn't and asked him again who he saw and where.

He didn’t hesitate, he pointed again and said ‘It’s Oma, Mama!’ I’m pretty sure I started crying immediately when I realized he was pointing up into the middle of the sky above the retention pond, and not at any house window, and certainly not at a living, breathing person.

He never did or said anything like that after that day. It’s weird for something to be creepy and comforting at the same time, but it was. It’s completely possible that I’m reading too much into a random incident, but I’d like to think that that maybe she made a moment happen so she could say goodbye on her way to wherever she goes next.” — Kristy, mom of two

Halloween Monsters On The Loose

“My 5-year-old son is scared of his room at night. Witches are so scary to him. A lot of my friends also said their kids have these irrational fears around witches. I don’t know if it’s from The Wizard of Oz or a movie. For some reason his friend group talks about them all the time, and he’s convinced a witch will come through his window and just descend upon him. He’s also really worried vampire bats will chomp through the glass with their little teeth, get into his room, and turn into a vampire.” — Ellen, mom of three

“When my daughter was 3, she told me I was a lot nicer than her last mommy. When she was 2, The Beatles came on the radio. She got really excited and told me this was her friend, John. I pulled up some photos when we got home and she pointed at a late ‘60s Lennon and confirmed that was her friend, John.” — Gayle, mom of two

“My daughter at around 3 used to say things like, ‘I learned that from my grandfather’ or ‘My other mother lives in a brown house.’ I didn’t think anything of it, but then she told us that her grandfather was coming to pick her up to take her to the brown house where her ‘other family’ lived and asked if I wanted to go with her. I was like, ‘No ma’am. I’m all good.’” — Samantha, mom of two