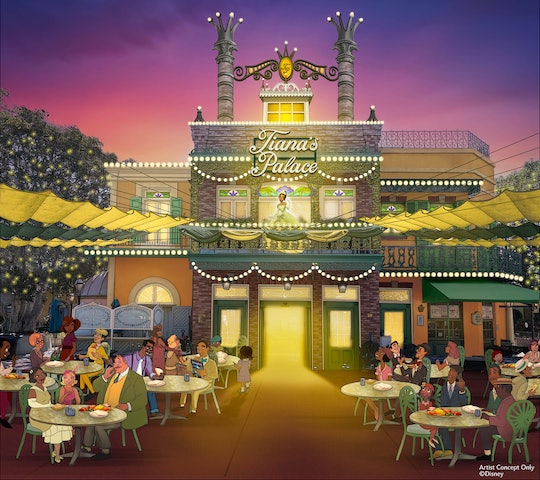 Princess Tiana’s Dream Restaurant Is Becoming A Reality At Disneyland

Princess Tiana’s New Orleans is coming to Disneyland. A replica of Tiana’s Palace from Disney’s beloved 2009 movie The Princess and the Frog will open at the Anaheim, California theme park later this year. The French Market Restaurant in New Orleans Square at Disneyland is being reimagined into Tiana’s Palace, a quick-service style restaurant with peach-colored walls and classic New Orleans cuisine on the menu. Cue the song, “Almost There.”

“Tiana’s Palace will be the newest restaurant on Orleans Street. Within its peach-colored walls and fancy green wrought-iron balconies, you’ll find elegant fixtures and appointments reminiscent of Tiana’s life and friendships,” Disney Parks announced in a recent blog post. “The new Tiana’s Palace will have much of the same pinch of pizzazz and flair as the restaurant from the film, offering authentic New Orleans flavors inspired by Tiana’s friends and adventures in this quick-service style restaurant.”

The new restaurant will replace the theme park’s French Market Restaurant, which will close permanently on Feb. 17, to start construction on the Disney princess-inspired eatery. Unlike Disney’s other signature restaurants, this eatery will not have a character dining experience, but guests could find Princess Tiana in New Orleans Square. “The menu will feature authentic New Orleans flavors inspired by Tiana’s friends and adventures in this quick-service style restaurant,” Disney said in the press release.

Tiana’s Palace and Eudora’s Chic Boutique pave the way for the grand opening of Disney’s upcoming attraction, Tiana’s Bayou Adventure. The water attraction will replace Splash Mountain and open in late 2024 at both Disneyland and Walt Disney World Resort in Florida. The attraction will pick up where the movie left off, in which Tiana is the successful owner of Tiana’s Palace and a food processing company called Tiana’s Food.

While we wait for all these new attractions to open, you can refresh on all of the bayou magic in The Princess and the Frog streaming on Disney+.