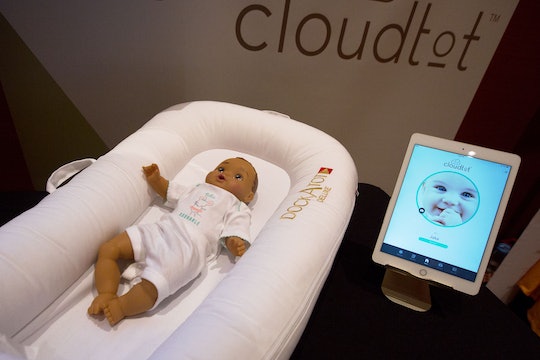 The agency says DockATot violated new safety standards and is “unsafe for your baby to sleep in.”

On Nov. 9, the United States Consumer Product Safety Commission (CPSC) issued a statement urging families and caregivers to “immediately discontinue” use of the DockATot Deluxe+, noting that it has been associated with multiple infant deaths.

In 2021, the CPSC issued the Infant Sleep Products Rule to eliminate products deemed too dangerous for infant sleep from the market by June 23, 2022. Importation, distribution, and sale of such products would thereafter be in violation of the rule, and the agency notes that DockATot was issued a citation for continuing to market its Deluxe+ model as a safe sleep product for babies even though it does not meet the agency’s standard.

The agency’s database lists four infant fatalities associated with DockATot products, ranging from suffocation from the puffy, raised sides of the device to skull fracture when a caregiver dropped the child nestled in the product. More generally, the CPSC has found more than 250 incidents and 21 fatalities linked to infant sleep products, including in-bed sleepers like the DockATot Deluxe+, which are often marketed as a safe way to co-sleep, a practice vehemently discouraged by the American Academy of Pediatrics (AAP).

Commisioner Trumka urges caregivers to discontinue use of the DockATot Deluxe+.

For its part, Wildchild Stockholm, Inc., the company that makes the DockATot, issued a statement challenging the agency’s notice of violation. “The Deluxe+ dock has not been recalled nor has a stop sale been issued,” it reads. “The issue at hand is specific to Deluxe+ docks manufactured on or after June 23, 2022. DockATot voluntarily ceased manufacturing and chose to not sell Deluxe+ docks in the US that were made later than June 23, 2022. ... While DockATot decided that it would no longer make the Deluxe+ dock for the US market prior to and independent of any notice of violation from the CPSC, the CPSC chose to issue and publicize a notice of violation regarding these units.”

While the rate of sleep-related infant death declined significantly in the 1990s with the AAP’s “Back to Sleep” campaign (now called “Safe to Sleep”), SIDS unfortunately remains the leading cause of post-neonatal mortality, with Black and Native American children disproportionately affected. The AAP urges families to place infants on their blacks for sleep in a separate space (i.e., no co-sleeping) with a flat, firm mattress and fitted sheet. They warn against pillows, stuffed toys, blankets, and crib bumpers until at least 12 months of age.

More Like This
Even If Your Baby Sleeps Better in Your Bed, It’s Still Not Recommended
Kate Winslet Shares Why She Thinks Kids Shouldn't Have Smartphones Or Be On Social Media
Does The FDA's Plan To Limit Lead In Baby Food Go Far Enough?
'Bachelor' Alum Sarah Herron's Baby Boy Died Shortly After Being Born At 24 Weeks
What Parents Are Talking About — Delivered Straight To Your Inbox