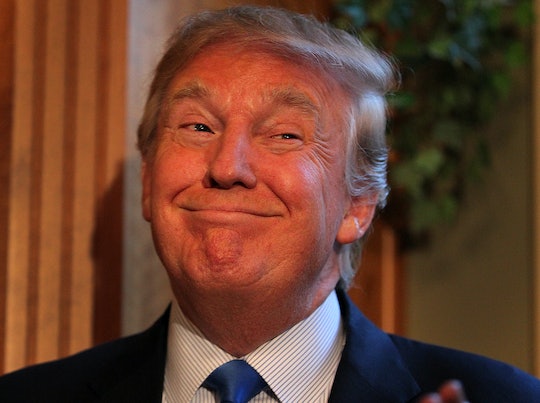 Oh Damn, Donald Trump Really Just Said "Some Of Us Have Horrible Children"

Which one does he mean? All of them?

Former President Donald Trump’s children, in particular his three oldest, have long been his most fervent supporters. When he was elected president back in 2016, his daughter Ivanka Trump quickly became one of his most trusted advisors in the White House, as did her husband Jared Kushner. His oldest son Donald Trump Jr. hit the campaign trail for his father hard and often, while his son Eric Trump took over the management of the family business. All giving up their former lives in thrall to their father, who recently said during one of his “Save America” rallies that “some of us have horrible children.” And Twitter swiftly reacted to the moment.

On Thursday, the former president was speaking in front of an appreciative crowd in Sioux City, Iowa when the topic of inheritance came up. Trump noted that “when you pass away” you can leave things to your child “if you like your child.” But he then added, “I always say if you don’t like your child, leave it to charity. Some of us have horrible children.”

As a father of five children, including daughter Tiffany with ex-wife Marla Maples and son Barron with wife Melania Trump, the use of the phrase “some of us” proved interesting on Twitter.

One Twitter user shared a clip of the video with the words, “He lies a lot but not always,” referring to Trump’s comments about horrible children.

“Is he’s talking about @DonaldTrumpJr?” another wondered, while this person added, “TRUMP: Some of us have horrible children. Wonder what the kids have to say..”

It was a rather bizarre choice of words for a man whose children appear to have so completely turned away from their own lives to support him in his political career in the past few years. There have been reports of a rift between Trump and his daughter Ivanka, particularly in the wake of the Jan. 6 Capitol riots. Both Ivanka Trump and Jared Kushner gave testimony about the riots, and the former president appeared to be upset about Ivanka’s taped assertion that she had accepted the election results when he wrote on his Truth Social platform that his daughter had “checked out” at the time.

But really to be fair, he could think any of his children are, he would say, “horrible.” But that seems like a family matter.

More Like This
Florida Teachers With “Unvetted” Classroom Books Could Face Felony Charges
How To Help Families Affected By The Devastating Earthquake In Turkey & Syria
Michigan Right-Wing Group Wants To Erase LGBTQ+ Sex Ed
Teacher Shot By 6-Year-Old Student Told School He Had A Gun, Was Told To "Wait"
What Parents Are Talking About — Delivered Straight To Your Inbox