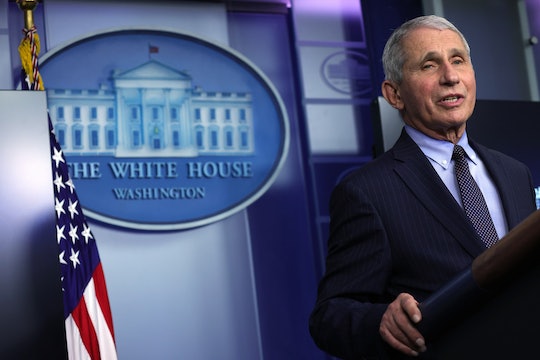 Because a shared bowl of chips is the perfect place for COVID-19 to spread.

While coronavirus cases and hospitalizations are falling across the United States, the nation's top infectious disease expert has cautioned Americans from seeing the decline as proof they can gather in person on game day. In fact, Dr. Anthony Fauci has urged against attending Super Bowl watch parties amid the ongoing pandemic, noting cases often spike after events like Sunday's expected matchup between the Tampa Bay Buccaneers and the Kansas City Chiefs.

"Every time we do have something like this, there always is a spike, be it a holiday, Christmas, New Year's, Thanksgiving," Fauci said Wednesday in an interview on the TODAY show. "As you mentioned, Super Bowl is a big deal in the United States."

Fauci is right: many Americans take Super Bowl Sunday very seriously. And when it comes to snack spreads, appetizers, and half-time buffets, Game Day is second only to Thanksgiving. According to the U.S. Department of Agriculture, the Super Bowl is the second-largest food consumption day in the United States. But plates of buffalo wings and bowls of chips are easy venues for viruses like COVID-19 to spread — not to mention the close proximity TV watching often requires.

So what can football fans do? While it may put a damper on celebrations, Fauci has urged folks to watch the game from home and only with those who live in their household. "Enjoy the game, watch it on television, but do it with the immediate members of your family, the people in your household," Fauci said. "As much fun as it is to get together in a big Super Bowl party, now is not the time to do that. Watch the game and enjoy it, but do it with your family or with people that are in your household."

According to CNBC, data from John Hopkins University has shown the rate of daily new COVID cases in the United States has fallen 41% in the last month. On Monday, the nation reported 134,000 new cases, a significant dip from the nearly 250,000 new cases being reported daily the month before.

But public health experts have cautioned that recent declines in new cases aren't a reason to become complacent about following certain safety measures, such as social distancing, limiting indoor gatherings, frequent hand washing, and wearing face coverings. What's more, Fauci has previously warned that more contagious variants of coronavirus, which were first identified in the United Kingdom, South Africa, and Brazil, have since been found in at least 21 U.S. states. According to CBS News, Fauci has warned that these new variants of the virus are expected to eventually become more dominant than the virus' initial strain.