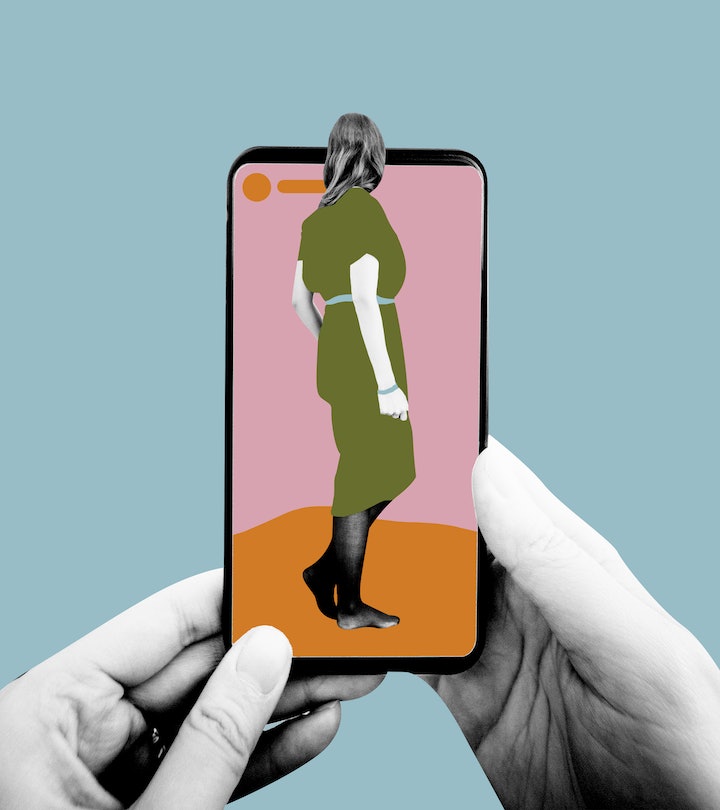 I had to spend a year not being perceived before I could figure out what kind of clothes made me — and me alone — feel good.

When we went away for a few days last summer, I texted my next-door neighbor to ask her if she could keep an eye out for packages. “I have some fancy undies coming,” I wrote. “Fancy” was not really the right word, but I couldn’t bring myself to say “some $28 high-waisted underwear with a cultish Instagram following that I have decided are going to fix my life."

Three days later, my neighbor opened her screen door with a mask on and pushed the package my way. It had the company logo printed on it, big and unmissable. “I should have known!” She said, then lifted up her shirt to tug at the waistband of her own high-waisted undies. (This is not as risqué as it sounds, since these almost go up to your bra.) Same brand, different color. We laughed.

It was July, then. Her daughter was 4 months old then, and now she's a year. She's walking. Our last babies were born around the same time and we whiled away so many afternoons talking about everything while our children played. I've never been within 6 feet of the new one.

I kept waiting for that eventual post-postpartum surplus of time and money and self-respect, but the whole world closed down before I could find it.

Four months into the pandemic, I had decided to focus on one small thing I could control: systematically replacing every pair of drugstore underwear that I’d bought "for that first week or two after the baby’s born,” then wore daily for the next two years. I kept waiting for that eventual post-postpartum surplus of time and money and self-respect, but the whole world closed down before I could find it.

It had been a few years since I could wear my old pants and I knew intellectually that two years postpartum, this was just what my body was like. I didn’t want to punish myself for that — I wanted to like myself. I had this very vivid pre-COVID fantasy of showing up at school pickup in cute, nice clothes that fit me and my hair blow-dried, instead of my wet bun and hateful maternity leggings.

But I had to spend a year away from other people to actually experience it myself: the late-breaking, slow-dawning revelation that buying clothes that fit and brought me pleasure made me feel better about my body. I had to spend a year not being perceived before I could figure out what kind of clothes made me — and me alone — feel good.

It started with tie-dye. I remember thinking, Yes. Tie-dye. How had we not thought of it before? Why did it feel so right? What had once been repellent, but now all that navy and gray and black and charcoal and maybe army green was sad, a reminder of another life. I wanted derangement, cheer. I wanted childhood family reunion vibes. I wanted to feel like the Florida teen I once was in ringer tees with orange around the sleeves and collar, in neon Birkenstocks with lavender socks underneath. I wanted no makeup. Masks made me feel sheepish at first but now I wanted them in bright colors, no denying it. Death was everywhere, the kids were at home. We countered with life, more life. I tie-dyed cloth napkins in pink and purple. I did my toddler’s crib sheet. It came out so good.

Next I ordered shorts on sale in three colors, in a size that fit me. We weren't paying for day care anymore, because it was closed. We got some stimulus checks. I was working on the weekends and taking care of my kids and the neighbors’ kids on weekdays. I figured I deserved them. I measured my body with a tape measure, to be sure. I did not have the energy or the impulse to care what the numbers meant. I followed hot, fat women on Instagram. In lieu of seeing people in person, I tapped through the stories of inclusive brands, feeling affection and acceptance toward every stranger that popped up in wacky floral prints and neon jumpsuits.

No one really knows about my newfound dignity, and how wrapped up it is in an unsupportive Instagram bra.

And that’s how I found the underwear. Grandma, high-waisted, soft-seamed. It didn’t cut into my body. The colors were so much better than my pack of Hanes. The material felt nice. I felt nicer in them. I showed them to my husband and we immediately had sex. I know that’s weird to say but I feel like I need to get my point across.

Like any good born-again, I wanted to spread the Good News. “I don’t know how to explain to you that you should wear giant underwear,” I sent to a careful selection of mom friends. I didn’t want to oversell it, but I also need everyone to know. My first target was Danielle. She had had a baby one month before lockdown. After her maternity leave ended, she worked at her tech nonprofit with said baby on her lap, breastfeeding between meetings. Whenever we saw each other that summer — which was rarely, 6 feet looming between us — one of us inevitably showed the other the top seam of our undies, peeking it out above the waistline of our comfortable pants. This was pretty much the entirety of my social life that summer: bonding over underwear with friends and neighbors.

“ARQ underwear is the only thing that makes me happy,” one of us would joke. And the other one agreed, and we would laugh really darkly, and then go back to speculating about whether school would open in the fall (it wouldn’t; didn’t; still isn’t) and how the hell she would do her job and also do remote school with her older son. We knew how I would do my work: on weekends, during nap time, or not at all. Even though I love working and am very bad at full-time caregiving, I felt really lucky — was really lucky — this was even an option.

It’s been a year now and there is still no school pickup to show up to in my tie-dye and neon orange Birkenstocks. No one really knows about my newfound dignity, and how wrapped up it is in an unsupportive Instagram bra. On the other hand, it’s been a year without scrambling to go to unpaid networking opportunities, a year without professional favors, without sweating in a Target dressing room, buying a $20 wrap dress in which to feel presentable when I feel anything but. No wishing I was invisible in a coffee shop, no wondering if my barista knows I am a pathetic woman who puts her iced coffee on a credit card so she can afford to pay for day care so that she can work on a novel that she might never get paid for.

I do want many of those things back, but in different ways. Kinder ways, ideally. And I hope when I am around other people again, my cruel, self-loathing voice doesn’t come back. I don't think it will. I know it wasn't other people that were the problem; it was me, my fear of what would happen if I just let it go, accepted myself as I was, moment to moment. (Nothing happened, of course. I just had one less thing to feel urgently bad about. There was space to think about other things.)

The tie-dye worked in whatever way tie-dye works, amid all the other uncertainty and instability and grief.

For now, though, the underwear works. Following body-positive accounts on Instagram works. The tie-dye worked in whatever way tie-dye works, amid all the other uncertainty and instability and grief. This year I felt the imaginary beams of acceptance, of who gives a fuck, of applauding what you’re doing with what you’ve got, of fucking going for it because we are alive, so far, despite everything, despite sometimes not wanting to be — and I hung my precious giant underwear on a clothesline to dry in the sun. The neighbor kids giggled at it. My son said, “Mom, I think your underwear is so big because your butt is so big.” No cortisol shot through me. I didn’t have to run to the bathroom to cry. I didn’t even turn red.

“Yup,” I said to him, and someone changed the subject.