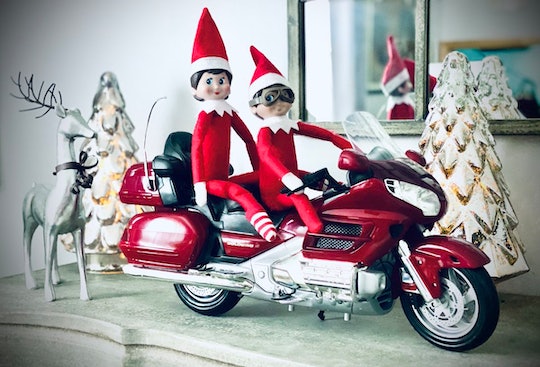 However, whether tucking away the elf for another year makes you feel sad — or breathe a sigh of relief — one thing is sure: Figuring out what to do with your Elf on Christmas Eve is huge, because it's supposed to be your Elf's final appearance for the year. And of course it has to go out with a bang — especially if you’ve been ramping up their antics all season long. This last day’s got to be out of the park, right?

The Elf on the Shelf returns home to the North Pole on December 24 in order to answer letters, train, and care for the reindeer. Although your family can certainly decide to keep the little elf around for longer, it's the recommended time to send them home for the year. And that means the elf's final appearance is often their most memorable and fantastic.

If the pressure for a super-awesome final elf pose is leaving you stressed, then this list may provide some inspiration. Just remember, the most important part of your elf's final night in your home on Christmas Eve is that your kid enjoys a final moment of holiday magic, it's worth all the effort. Then you can finally shutter them up in the back of your closet until next year.

Deciding how to send Elfie off for the year can be a daunting choice. Do you go big and create a scenario that your kids will be talking about for years to come? Or do you try to keep it low-key, to try to soften the goodbye for child who has become incredibly attached?

Some of you might just be counting down the hours until you can say goodbye to your Elf. However, to your kids, your elf’s grand finale is almost as big of a deal as Christmas Day. During the last 24 days, it’s likely that Elfie became another member of your family, so treat their departure as such. Make Christmas Eve all about Elfie and all the chaos and fun it caused. Ask your kid what their favorite Elf On The Shelf setup was, maybe even think back on your favorite too. Yes, they’ll be back next year, but you want a big finish, right? Throw a goodbye party for your Elf — you’ll love how much your kids love it.

This article was originally published on Dec. 19, 2017