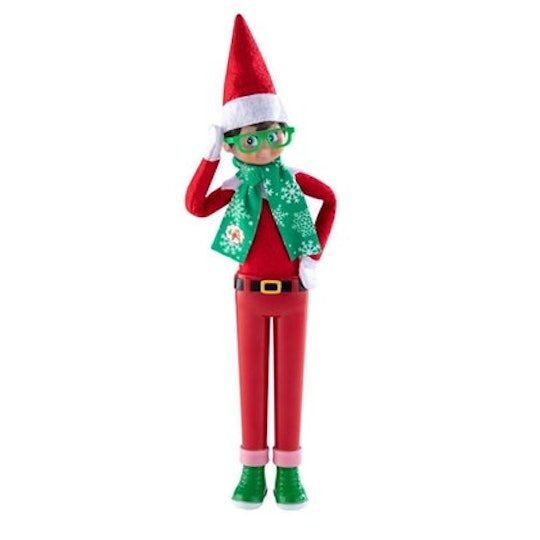 elf on the shelf

Elf On The Shelf's New 2021 Toys Include Hipster Elf, Crutches, & A Board Game

There’s no end to the Elf-inspired fun.

You gotta hand it to the Elf On The Shelf, he really manages to stay relevant year after year. Aside from the fact the elf signifies that Christmas is coming, a major part of the excitement is that each year, the Elf on the Shelf toys get even cooler (last year the elf crew got inflatable sleds and reindeer-themed sleeping bags).

The Christmas 2021 Scout Elf collection of accessories do not disappoint: there are outfits that make your elf stand on its own (so, um, you don’t have to find creative ways to prop it up all over the house), plus three new “elf mates” who each have a specialty job and encourage kids to engage in various acts of kindness. You’ll also find holiday PJs for the elves, an awesome train-themed advent calendar, plus new fun games for kids including an elf scavenger hunt, and so many more Elf on the Shelf toys.

You may be happy to hear that this year there’s a Santa’s North Pole’s friends activity book for kids who just can not get enough of the little surveillance pixie. It includes stickers, fun activities like coloring or mazes, and it may just buy you a few minutes of peace and quiet (which, realistically, you’ll probably need to use to re-hide the elf). Read on for some of the best new Elf On The Shelf toys for 2021.

An Elf On The Shelf Advent Calendar

Kids love advent calendars, and for good reason. They’ll get 24 days of fun surprises, all tucked inside an Elf On The Shelf cardboard train that comes with a paper play mat that looks like a train track. Inside there are five little train cars plus an engine, 10 Scout Elf™ and Elf Pets® minis, glittery Christmas trees, holiday boxes, and more.

A Trio Of Elf Mates

The year the Elf On The Shelf line rolled out Elf Mates, which are soft figurines (not unlike the Elf himself) that are supposed to be sent from Santa to spread kindness and good cheer. There are three to choose from: The Toy Maker who encourages kids and adults to play and give to those who are less fortunate, The Cobbler, who asks that kids take a walk in someone else’s shoes (get it?) while also recognizing what they’re grateful for, and maybe even donating clothes and shoes. Then there’s The Chef whose mission is to encourage people to reduce food waste, or volunteer at a local food bank. The mates can be bought together or separately, and the trio comes with a story book.

A Hipster Elf On The Shelf Outfit

If your elf has strong opinions about coffee, listens to vinyl records, and has more than one beanie, it’s safe to assume it’s a hipster. This year, embrace your elf’s hipsterdom with this Claus Couture hipster outfit. This year’s outfit selections use MagiFreez™ to allow the elves to stand on their own; basically the clothes are made of a more sturdy material with shoes as a base for standing.

An Elf On The Shelf Board Game

Present Pile Up Board Game
Elf On The Shelf

This year, there are three new fun games inspired by the elf and pals. There’s a scavenger hunt game where kids have to find hidden elf cards, a game that’s like Uno with a holiday twist, and then there’s this present pile up game. Players will have to use the launcher to send presents flying into the back of Santa’s sleigh, with some fun surprises along the way.

Crutches For Your Elf On The Shelf

For the kid who recently broke a bone (or is just super into band-aids), this set of crutches and a cast for the elf will be a hit. It may raise a few questions about how, exactly, the elf manages to scurry around the house with a broken leg, but elves are magic. This set allows the elf to stand on its own, and it comes with a snowflake-printed blue patient gown, crutches, a cast, and six elf-sized, Christmas-themed bandages.

More Like This
Can You Light Fireworks In Your Backyard?
15 Juneteenth Shirts For Kids To Express Their Pride & Support
Here’s Everything You Need To Know About Sam’s Club On Father’s Day
Lowe’s Won’t Be Leaving Dad Stranded This Father’s Day

This article was originally published on Aug. 6, 2020