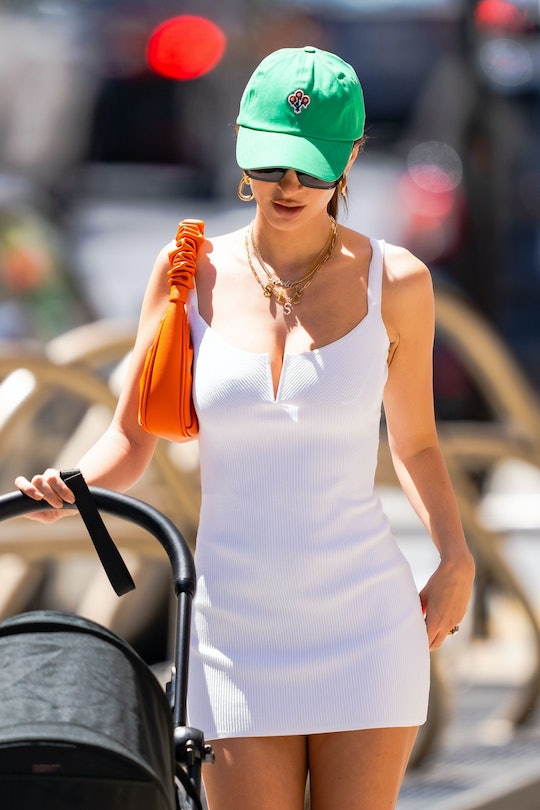 What Is It About The Emratagram That Makes Me So Depressed?

The latest viral photo from Emily Ratajkowski’s Instagram is not a portrait of parenthood, it’s a bikini pic that just happens to have a baby in it.

There’s a photo of me, a week into life with my first baby, that I look at a lot. It’s the first picture I posted on Instagram of me as a mother. I’m looking straight at the lens and holding my very young son on my shoulder, his back to the camera. But it’s not really a photo of my son, it’s a portrait of me, glassy-eyed, exhausted, on the verge but still standing (well sitting, really). It’s photographic proof that I survived the first week of new motherhood and that I still existed. I needed to show myself and the world that I was still here.

I’ve been thinking about that photo a lot this week because of another image of early motherhood that has gone viral.

While almost everything else is world’s apart, the general construction of the two photos are actually pretty similar. We’re both new moms wanting to be seen, but the similarities between my bleak selfie and Emily Ratajkwoski’s vacation pics end there.

The photos the model recently shared on Instagram holding her new son seem almost designed specifically to piss off different parts of the internet. She’s in a bikini and she’s tiny! The baby’s head isn’t being supported and she’s holding it so awkwardly because she’s trying to get the perfect bikini body shot! It made a lot of us feel a lot of things.

I’m not interested in shaming her about how she looks — she looks hot; youth, money and time are on her side. I also don’t want to give her shit about the way she was holding her baby. Sure it looks like she’s never actually held a baby in her life and someone just handed her a prop from outside the frame but the baby is clearly fine and I’m sure she’ll figure it out.

So what is it about these images that make me feel so depressed?

We perform almost every aspect of our lives online now. When it comes to motherhood that performance is even more pronounced because we all know what’s being left out of the artfully cropped baby pics. The messy corner and sobbing toddler may be out of view in the posted photo, but other parents know it’s there. The suspension of disbelief is an unspoken gift we grant each other because these photos are also a connection point, a way to signal vulnerability, joy and also distress. We share these photos to share ourselves during an often very lonely time.

Parenting is the ultimate act of optimism, it’s a promise to yourself not only that the world will be a good enough place for your kids to survive in, but that you will be a good enough person to help them do so. These images we share are part of that ambition to express the belief that the good parts really are good and outweigh the sleeplessness and helplessness and guilt. When I first shared that sad little selfie of mine, so many other mothers slid into my DMs to assure me it was going to get easier and I was grateful for the optimism.

But the cynicism about the facades we present is always creeping to the surface and threatening to undo all that, gnawing away at the hope that underneath the performance is something and someone authentic.

Children leave their marks on us, both psychic and physical, the photos we share online are meant to convey both the imprint they’ve left and our ability to withstand them.

It’s clear to anyone who looks at the photos that she shared that Emily Ratkjowski is performing the version of motherhood she wants very badly to reflect. Motherhood obliterates your sense of self, particularly your relationship with your body and her photos feel like a desperate plea to see her as we saw her before the baby, so why bother including the baby at all? It feels not just cynical, but joyless. Her need for us to see that she still looks like that is palpable.

But the performance doesn’t seem attached to anything else, there is no vulnerability, no connection to shared experience, no revelation about the realities of parenthood beyond, ‘here’s a baby, here’s my body.’ It feels like a flattening of the entire experience of motherhood online. Her child is an accessory both in its placement and in the untraceable effects on her body.

Children leave their marks on us, both psychic and physical, the photos we share online are meant to convey both the imprint they’ve left and our ability to withstand them. These photos convey nothing about who she is as a person or a mother, the baby functions more as a kind of ring light designed to highlight and accentuate the contours of her body. It’s not a portrait of parenthood, it’s a bikini pic that just happens to have a baby in it.