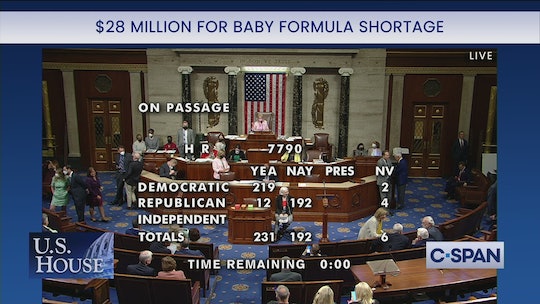 Of the two votes, one was a largely bipartisan effort while the other fell along party lines.

The House voted on two pieces of legislation this week to address the ongoing formula shortage that has left many families in crisis mode. While both ultimately passed the House, the votes looked quite different from one to the other. Here’s what you need to know.

The Access To Baby Formula Act seeks to aid America’s most vulnerable families.

Connecticut Rep. Jahana Hayes (D-CT-5) led the introduction of this bill — H.R. 7791 — which proposes measures to help improve access to infant formula for families who participate in the WIC (Women, Infants and Children) by amending the Child Nutrition Act of 1966.

WIC provides essential nutrition to families in need — nearly 45% of infants in the country are eligible for WIC benefits, according to data from the USDA — but options are often limited in regard to which products they can buy, including baby formula. Politico reports this is the result of three decades of “sole-source contracting,” a system in which companies enter contracts with states to provide a product below retail price. The result: the state saves money, but WIC families can only use their benefits to buy from those designated companies. One of those is Abbott Nutrition, whose plant in Sturgis, Michigan shut down in February, and is expected to reopen within the next few weeks. (Only two other companies — Mead-Johnson and Nestle — hold WIC contracts.) currently hold WIC contracts.)

So while supplies are scarce for everyone, they’ve been particularly limited for America’s most vulnerable families. H.R. 7791 offers flexibility in times of crisis — such as certain emergencies, disasters, and supply chain disruptions — so that families can purchase a wider variety of brands with WIC benefits.

Gaetz took to Twitter to voice his displeasure, stating that H.R. 7791 would “allow WIC to utilize a far greater portion of the baby formula market, crowding out many hard-working American families.”

The Infant Formula Supplemental Appropriations Act would shore up FDA staff to tackle the issue.

“FDA does not have the adequate inspection force to be able to do that and to do it in a timely way," DeLauro told NBC on Wednesday. "So the crux of this is providing infrastructure.”

A stipulation of this funding is that the Commissioner of the FDA must report to the Committees on Appropriations of the House and Senate on a weekly basis regarding the use of this funding. DeLauro, who also serves as the Appropriations Committee Chair, spoke on the House floor calling both Abbott and the FDA to task for negligence in reporting and investigating formula contamination in a timely manner.

“In essence, [Abbott] put a product on the market they knew was contaminated and at least two infants have died, several were hospitalized,” she said before continuing, “because of corporate greed, consolidation and a disgraceful lack of proper oversight by the FDA.”

While 12 Republicans broke ranks to join Democrats in passing the bill, the vote fell largely along party lines — 192 Republicans voted “Nay” for a final vote of 331-192 (with four Republicans and one Democrat not voting). The Republicans who voted in favor of the bill largely represent swing states or represent the minority party in their state.

In addition to this legislation, which still must pass the Senate in order to be signed into law, President Biden announced two main actions to address the shortage at an executive level: the invocation of the Defense Production Act to increase domestic production and “Operation Fly Formula.”

The Defense Production act enables the government to require suppliers to direct resources to infant formula manufacturers, even if another private entity has already ordered it for themselves.

Operation Fly Formula will enable federal planes to import formula from overseas. Until now, receiving formula imports from one of the country’s top importers, Canada, has been made more difficult during this shortage due to the United States-Mexico-Canada Agreement (USMCA), the Trump era agreement that replaced NAFTA and increased tariffs on (among other things) Canadian dairy products.

Hopefully these measures will ameliorate an increasingly dire situation for families soon.

More Like This
Ketanji Brown Jackson Spoke Directly To Her Daughters In Her Powerful Opening Statement
Robb Elementary School Is Set To Be Demolished After Deadly Shooting
Can States Ban The Abortion Pill? FDA Rules May Make That Hard
Here’s How To Fight For Abortion Rights