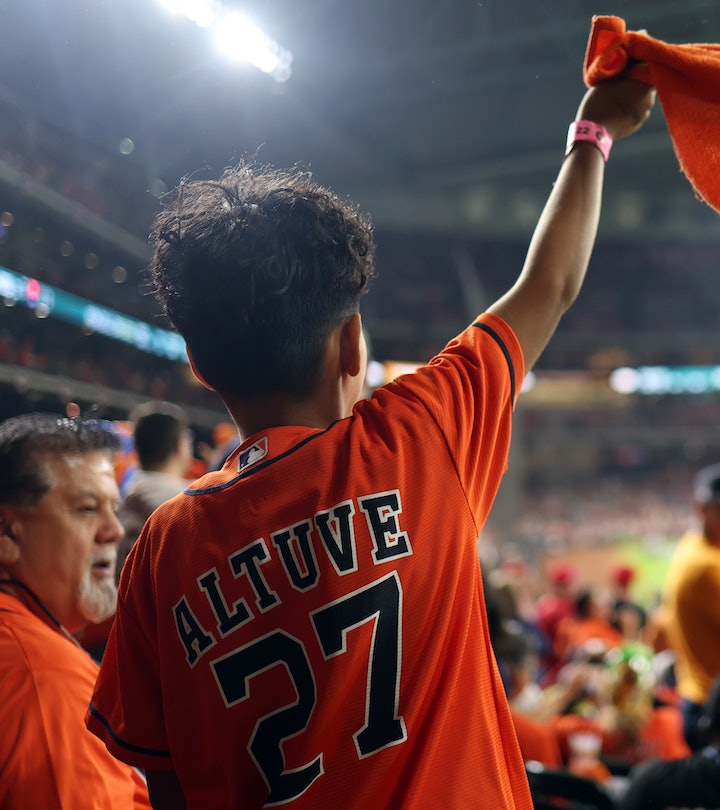 How The Astros World Series Win Exemplifies Community For My Kids

It’s proof that support can be found in unexpected places.

It’s rare in today’s society to see so many people from so many different backgrounds come together in support of one common goal. As a mom, I want my kids to see how they can make genuine and meaningful connections with others, no matter who they are or where they come from. I want to give them examples of true community; a place where support is never conditional or in short-supply. As outrageous as it may seen, I’ve found that exact thing as a Houston Astros fan during the 2022 World Series.

This season marks the Astros’ second championship season in the last six — but the first without an asterisk next to it. A fandom laser-focused on victory and a team determined to win with a clean slate and a clear conscience created an unstoppable, unified force that won it all. But more meaningful than any championship title is the shining example of community that this World Series run has shown my kids.

The nation is divided in so many areas, and that message is magnified to the masses on a daily basis. But the baseball community — and more specifically the city of Houston and the Astros fandom at-large — is one of the few, if yet unexpected, things to shatter this narrative. It’s a beautiful example of how sports can create a common thread to connect people who are at completely opposite ends of the spectrum, whether that be politically, socially, economically, or any other way.

For all of its high points, this era of Houston Astros baseball is not without its lows. Explaining the ins and outs of the 2017 cheating scandal to an 8-year-old and a 10-year-old and answering their many questions has been no easy task, but it’s also been an unexpected learning opportunity. Players, coaches, and staff come and go. They’re all human, they all make their own choices. and sometimes they choose wrong. The pathway through the scandal and the fandom that has embraced the turnaround of the organization is something I’m actually proud to share with my elementary school-aged boys.

I don’t live my fandom loudly like the super fans in full astronaut suits or the guy with the bright orange Mohawk who my kids have spotted on every single TV broadcast since meeting him at a game this summer. I’ve never even so much as brought a painted poster to a game, yet it is deeply ingrained into who I am. That’s just the way this fan base operates. We’re all in, all of us, all the time. Through the ups and the downs, the losses, the scandals, the trades, the boos. We still don the colors and wave rally towels. We take our kids to games, strapped to our chests as infants and then lined up to run the bases on a Sunday afternoon. We go to watch parties and sport bumper stickers. We’re in line at Academy to buy championship shirts four innings before the game even ends. Our fandom lives in our hearts as a real, tangible thing that we all share.

Clearly, the team played their parts and played them in historic fashion, but even they give credit to the Astros fan base for our role in this championship run. It’s because we’re all in. All of us, all the time. Just like we were to win this series. United by the common thread of a fandom in a way unlike many of us are in any other area of our lives.

We are my college friend’s elderly grandmother with a bright orange jersey draped over the top of her bedridden body, smiling from ear to ear as she watched her team win. We are the social media mavericks who stayed up until dawn to piece together game highlight reels with a soundtrack songs from Houston natives. We are Kate Upton in her fabulous throwback jacket, looking deliriously happy as she snapped pictures of her daughter sitting on dad Justin Verlander’s lap during a postgame interview. We are the 20,000 fans who signed a petition to convince the team to let Houston icon and philanthropist Jim “Mattress Mack” McIngvale throw out the first pitch at Game 6.

We are the moms who jumped up and down in the living room with our kids, next to a fully-decorated Christmas tree because it’s the first weekend in November. We are everyone who sent frantic, happy, emoji-filled, celebratory texts to one another at nearly midnight. We’re everyone who was lucky enough to be at the game for the win and everyone who wishes they were.

This type of fandom is a sight to behold. It’s proof for my kids that support and community can come in all kinds of packages — including a World Series win. There’s a humanity to it that’s difficult to put into words because it simply doesn’t exist anywhere else right now. For those fortunate enough to experience it, it’s utterly unforgettable. It’s hopes and dreams and hard work and goals come to fruition. It’s everything the world needs in this moment, and Houston has it.

More Like This
Score Big On Super Bowl Sunday With The Best Frozen Apps From Trader Joe's
41 Costco Appetizers To Level Up Your Super Bowl Party
10 Super Bowl Party Games To Play While You Watch The Main Event
These 30 Walmart Appetizers Are Super Bowl Snack Goals (Get It?)
What Parents Are Talking About — Delivered Straight To Your Inbox