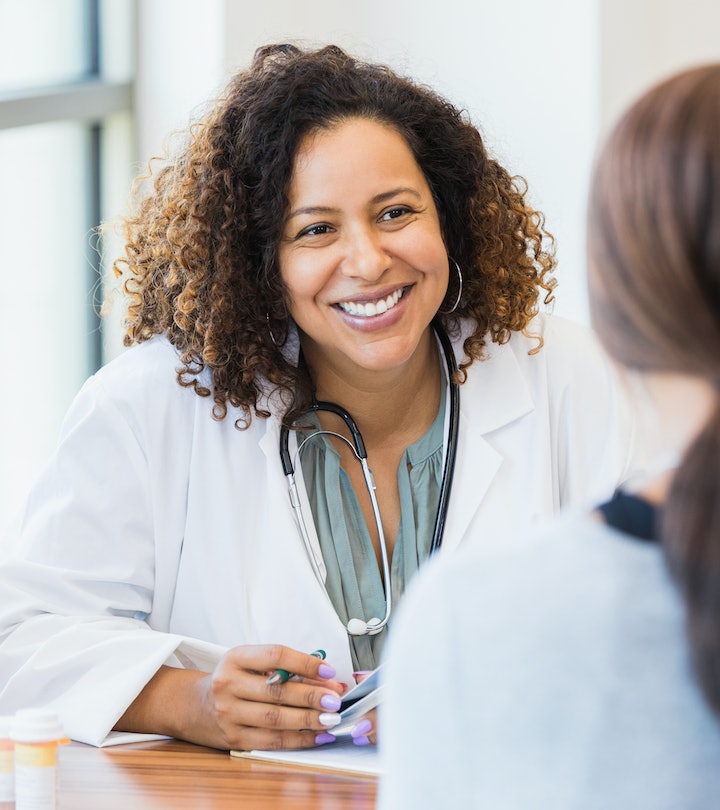 It depends on a few factors.

When you're considering a change to your birth control method — or thinking about becoming pregnant — it's natural to have questions about what it’ll be like to go off birth control. For instance, how long does birth control stay in your system? The answer depends on what type of birth control you're currently using, because some forms of birth control can stay around for much longer than the others. We talked with the experts to get the details.

How long does birth control stay in your system?

“Hormonal birth control lasts in one’s system different lengths of time depending on the type medication,” explains Dr. Joya Johnson, an OB-GYN at Spectrum Health West Michigan. In general, though, most birth control methods don't hang out in the body for very long after you discontinue use. “In general, it takes 4-5 half-lives to eliminate a medication,” Johnson says.

If you’re not sure how to think of your birth control in terms of half-lives, though, never fear. “For an oral progesterone-estradiol pill (or "oral combination pill" or OCP), this is 40-225 hours.” In other words, you can imagine that within a day or two, much of the medication will be out of your system. Or, another way to think of it is that if you’ve missed a pill accidentally, you could be playing with fire. “If a person is using an OCP for pregnancy prevention, it is still effective if they miss one pill,” Johnson says. “But if they miss two or more pills, the efficacy of drastically decreases and back up methods of contraception are recommended.”

Once the hormones are out of your system, it may be a little while before your regular period makes an appearance. "The combined pill works by suppressing ovulation, and therefore it might take a while for ovulation to resume once the pill is stopped. In some women, it can take up to six months for periods to resume," says Dr. Alex Polyakov, an OB-GYN. "On the other hand, ovulation may restart immediately and it is not uncommon for women to get pregnant without having a period after stopping the pill." If you aren't trying to conceive at the moment, then consider using another type of birth control, like a condom or a cervical cap.

“For progesterone IUDs, the medication primarily works locally (affecting the uterus and cervix),” explains Johnson. “Once removed, the majority of its effects are immediately lost.” In other words? If you’re not trying to get pregnant and you have had your IUD removed, be sure to use an alternative form of contraception. “In fact, I counsel patients to abstain from intercourse for 72 hours prior to removal, especially for the IUDs,” says Dr. Tiffany Woodus, an OB-GYN, because the efficacy ends so immediately upon removal.

The Depo-Provera shot is one form of birth control that can take a while to exit the system, sometimes months after the last injection. For the Depo shot, the half-life is 200-250 days. Therefore, “if a person is planning when they might try to conceive, it may be 7-9 months after their last injection before they ovulate,” says Johnson. Keep this longer return time in mind if you're thinking about becoming pregnant in the near future. There are a few things to know about getting pregnant after Depo-Provera, and tricks such as charting your ovulation can help. That said, it is a reversible form of birth control, so a little time (and advice from a doctor) may be all you need.

Remember, everyone is a little different

In addition to the methods of birth control themselves, each individual's body can react differently to quitting. Age is one factor. “Metabolism (our bodies' ability to breakdown & process what we put in it) typically slows with age. So, as we get older, it can take our bodies longer to process any medications (including hormones), meaning the effects can last longer,” says Woodus.

Other meds you're taking can have an effect, too. “There are also certain medications, such as some antibiotics, that interfere with the metabolism of hormonal contraceptives when taken at the same time,” Woodus explains. So, although there's a general time frame for how long it takes birth control to leave your system, the exact time will vary a little from person to person. With this in mind, it's a great idea to address any of these concerns with your health care provider, while explaining your plans for the future, such as whether you're trying to conceive or switch to a different method of birth control altogether.

When can I start trying to get pregnant after stopping birth control?

Once those hormones are finally gone for good, is it safe to start trying to conceive? “There is no danger in falling pregnant immediately after ceasing birth control preparations, and this applies to both the pill and IUDs, as the hormones get metabolized and leave the body within 24 to 48 hours,” Alex Polyakov, an OB-GYN, tells Romper.

So, if you’re done with birth control and hoping to get pregnant, there is no harm in starting almost right away. As always, though, the best advice will come from a conversation with your health care provider.

More Like This
What Foods Fight Nausea During Pregnancy?
OB-GYNs Explain The Connection Between Stress & Miscarriage
Diastasis Recti Exercises You Can Do At Home To Heal Your Abdomen
Why Is My Discharge Brown? Experts Explain
What Parents Are Talking About — Delivered Straight To Your Inbox

This article was originally published on April 27, 2020