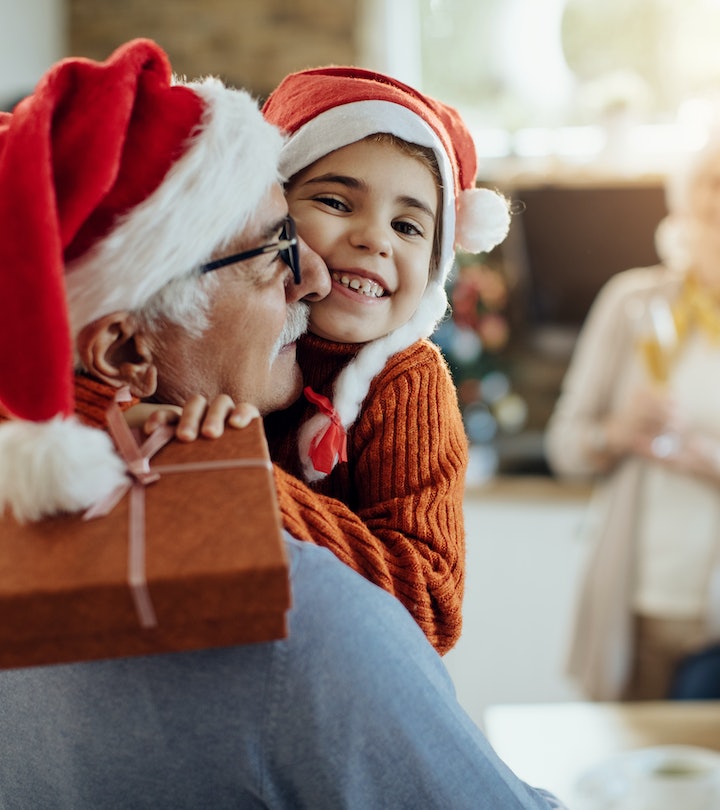 The Average Amount Grandparents Spend On Christmas Gifts Might Surprise You

Of course, there’s no “correct” amount that works for every family.

A couple months before the holiday season rolls around is when many families start thinking about gifts — planning them, asking their children what they'd like, and floating the idea that lumps of coal will appear under the tree when the kids are misbehaving. Statistically, it's not out of the ordinary for many parents to spend a couple hundred dollars per kid — if they can swing it and want to, of course. But how much should grandparents spend on grandchildren for Christmas? The spending trends according to research might surprise you.

What was the average Christmas spending amount per child in 2021?

For some perspective, the average U.S. consumer spent $786 in 2021 on gifts during the holiday season, according to surveys by RetailMeNot. Altogether, U.S. consumers spent a record $886.7 billion on the holidays last year, per the National Retail Federation, which was a whopping 14.1% higher than in 2020. This year, however, RetailMeNot projects that the average American will spend $725 on holiday gifts in 2022, (a little less than last year), citing inflation concerns as the main reason for the decrease in anticipated spending. Data from Salesforce echo this prediction, finding that 51% of U.S. consumers plan to buy fewer gifts this year than in 2021, due to the economy.

In terms of the average Christmas spending per child in 2021, the typical holiday shopper with kids under 18 spent $276 per child on gifts, which was a slight increase from the average Christmas spending per child in 2020, per CreditCards.com. While this 2022 spending insight isn’t child-specific, according to PwC’s report, U.S. consumers plan to spend an average of $733 on their family this holiday season. It is interesting, though, that this number differs greatly between generations, with the Gen X family spending average at $889, Millennials at $861, Boomers at $760, and Gen Z at $420 for the 2022 holidays. Given that most grandparents are Gen X or Boomers, we can start to see how much grandparents intend to spend on gifts this holiday. With this in mind, what else do we know about how much grandparents typically spend on Christmas gifts?

How much should grandparents spend on grandchildren for Christmas?

In November 2021, researchers at OppLoans surveyed over 1,700 grandparents across all 50 states and the District of Columbia, asking how much they spent on holiday gifts, if they felt these gifts were appreciated, and whether or not they ever planned to stop giving their grandkids gifts. While there isn’t an updated survey for 2022, it’s safe to guess that this years numbers will be similar to last year’s stats, if not slightly lower, given the overall economic projections for this holiday season. According to the survey, the average amount spent on Christmas gifts by grandparents was $218 per child. However, grandfathers actually spent more on holiday gifts ($244) than grandmothers spent ($202).

Other interesting findings from the OppLoans survey include:

Another source of data offering insight into grandparents’ gift-giving habits can be found in a 2019 study conducted by AARP. According to this survey, grandparents spend an average of $2,562 annually on their grandchildren, with 86% of the nation’s grandparents spending an average of $805 on gifts each year. Although this data doesn’t speak to Christmas presents specifically — it likely includes birthday presents and gifts for other occasions — it does go to show that many grandparents across the country invest a chunk of money into gifting their grandkids.

That being said, while these numbers may speak to larger trends that the U.S. is exhibiting, ultimately, there is no specific amount for how much grandparents should spend on grandchildren for Christmas. And the holidays can be special for grandkids regardless of money spent.

What age do grandparents stop giving gifts to grandchildren?

Naturally, the answer to this differs from grandparent to grandparent. There is no set or agreed upon age at which grandchildren should stop receiving gifts from grandparents. Some stop giving Christmas gifts once a grandchild reaches adulthood; some continue to send them for their whole lives. And there are all sorts of in-betweens.

In fact, even without the notion of a special occasion gift involved, grandparents tend to spend a lot on their grandchildren for a variety of reasons. According the aforementioned AARP survey, of that approximately $2,562 spent on grandchildren each year per grandparent, these dollars go toward a bunch of different expenses and spending choices, including gifts, but also education, day-to-day necessities, entertainment, vacations, and expenses — and there was no specified age of the grandchildren in this survey.

So, it’s safe to say that many grandparents spend money on their grandchildren throughout their lives, even if it’s not in the form of “gifts,” in the way that we think of traditional Christmas gifts. Plus, every family does things differently. Ultimately, there is no correct answer when it comes to the age at which grandparents stop giving gifts to grandchildren.

How to make Christmas special on a budget

The holiday season can definitely put pressure, both financial and emotional, on a lot of parents and grandparents. What’s most important, though, is that grandparents and parents aim to make the holidays special and memorable for the kids in their lives, and that certainly does not have to include spending big bucks on gifts — or buying gifts at all.

“Holidays are about building memories, closeness, and family identity — we want our kids to look back on these special days with fondness and a warm sense of, ‘This is how we do things in my family. This is what brings us together,’” Eileen Kennedy-Moore, Ph.D., psychologist and author of Kid Confidence: Help Your Child Make Friends, Build Resilience, and Develop Real Self-Esteem, tells Romper. “Physical gifts can be delightful in the moment, but memories of these are likely to fade.”

When next Christmas rolls around, kids likely won’t remember what they received as holiday gifts last year, but rather how they felt around the holidays. Still, many grandparents can feel obligated to spend a certain monetary value in order to buy presents that will make their grandchildren happy.

“Holidays can put pressure on adults when expectations are too high or just out of sync with current circumstances,” explains Kennedy-Moore. “In some cases, pressure can come from parents believing they need to spend more money than is comfortable or wise because they don't want their kids to feel deprived. There may also be disagreement between parents about how much to spend.”

Kennedy-Moore recommends thinking carefully about what matters most to you and putting your efforts toward that, which may include ditching the activities that no longer match your values or simply don't seem worth the effort — even if they're tradition. Instead, consider creating new traditions that fit you and your grandchildren’s vision of a fun holiday.

“Focus on sharing fun activities,” Kennedy-Moore says. “If you don't see your grandchildren often, talk to their parents to understand what they enjoy doing now. Children's interests can change rapidly! A game you can play together might have more staying power than a toy.”

Activities such as having a holiday-themed movie night, taking a trip to a local museum or sports game, making DIY ornaments, and cooking up a pancake breakfast (or maybe even a pancake dinner) can make for incredibly fun memories to share with your grandkids. Presents are often considered a seasonal norm, but experiences can sometimes be even more meaningful during the holidays.

The research definitely indicates that when it comes to grandparents across the United States, many like to loosen the purse strings for their grandkids for the holidays. But in reality, not everyone can or wants to do that — and that’s OK. What matters most this Christmas is that grandparents prioritize making the holidays special, gifts or no gifts.

This article was originally published on Dec. 12, 2018