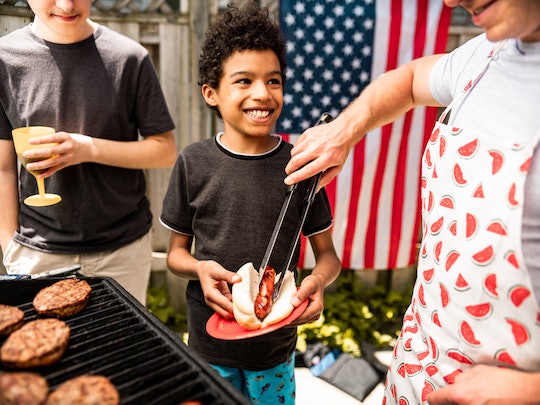 Here's How To Explain Fourth Of July To Your Kid

We hold these truths to be self-evident...

For kids, Independence Day might seem like just another fun holiday. There are fireworks, big feasts, and if they play their cards right, likely some kind of ice cream involved. But how do you explain what the Fourth of July is really all about to children?

“I think you start with the idea of what’s right and what’s fair,” says Mike Doveton, National Park Ranger at Independence National Historical Park in Philadelphia, Pennsylvania. For Doveton, who works at the home of the Independence Hall where the Declaration of Independence and the Constitution were signed and the Liberty Bell, discussing Independence Day and the American Revolution is a daily undertaking. But he admits it’s a complicated story when you’re trying to figure out how to explain the Fourth of July to kids.

To make it easier, he says the best place to start is to consider the questions that might come up about the Fourth of July from the kids in your family.

What are we celebrating on the Fourth of July?

“I try to explain that July Fourth is about how we were trying to stand up for ourselves as a nation,” says Doveton. “The colonists thought that the rules they were told by Great Britain that they had to follow weren’t fair.”

Here, Doveton says, is a good moment to ask kids if they can think of something that’s not fair in their life. Once it’s clear they have a grasp of fair versus unfair, you can move on to explain what the colonists felt was unfair — 27 grievances in all — and share that they asked one of their leaders, Thomas Jefferson, to write a document to explain all the ways this treatment was unjust. We call this document the Declaration of Independence.

“That's something that kids can actually relate to pretty well,” says Doveton. And while you don’t need to read the entire Declaration to your kids, pieces of it, and some of the 27 points it contains, are worth reading.

To help parents, the National Archive — home to signed Declaration of Independence — has created a landing page explaining the Declaration called “What does it say?”

What are we celebrating on Independence Day?

Once kids have a grasp of what made colonists willing to declare independence in the first place, Doveton says you can move to explaining what we’re celebrating.

“I would say we’re celebrating how members from all these different colonies in the Americas got together in a room and and agreed on the reasons that they are going to separate from Great Britain, from the king. And we celebrate this because that's the moment they stand up for themselves. They say, ‘We're not going to take this anymore. It’s unfair the way we've been treated and we're going to band together and make our own new rules,’” says Doveton.

Even though the Revolutionary War won’t end until 1783, we celebrate July Fourth, when Americans said in one voice, we’re going to be our own nation with our own rules.

What does 'independence' mean?

“I would tell kids that independence is the right to make your own decisions,” says Doveton. “Children of all ages have some form of independence to make their own decisions, but they need help and guidance. And I would say that as a nation, independence means not just being free to do anything you want. It comes down to community and agreeing upon certain rules and behaviors that we're going to abide by.”

Why do we celebrate Independence Day on the Fourth of July?

This is a good question, since technically speaking some could argue it should be July 2. That’s the day the Continental Congress officially declared its freedom from Great Britain. July Fourth, however, Congress approved Thomas Jefferson’s Declaration of Independence document.

To make the lesson simpler for kids, Doveton says, “July 4 is when the movement of independence begins” and that’s why we celebrate it then.

What are the fireworks for?

“In many instances they did have fireworks and explosions,” says Doveton of early American revolution celebrations. John Adams even predicted celebrations with illuminations for years to come:

“[Independence Day] will be the most memorable Epocha, in the History of America. I am apt to believe that it will be celebrated, by succeeding Generations, as the great anniversary Festival… It ought to be solemnized with Pomp and Parade with shews, Games, Sports, Guns, Bells, Bonfires and Illuminations from one End of this continent to the other from this Time forward forever more.”

So maybe that’s why we still celebrate with fireworks.

Why do we wear and decorate with red, white, and blue?

We can probably thank Betsy Ross, the creator of the first American flag in 1776, with America’s passion for red, white, and blue. On June 14, 1777, Congress officially adopted the stars and stripes. Doveton says you can explain the symbolism to kids by sharing how the stripes were originally just 13 for the 13 colonies and 13 stars to match. If you want to add a counting exercise, kids can count the stars on the current flag and you can explain how the nation grew.

Looking for some more exercises to engage kids on Independence Day? The National Archives has made a virtual page to add your own signature to the Declaration of Independence.

In addition a joint effort of hundreds of civic and historic institutions have created a website called Civics Season as a means to expand “the lens, making space for more stories from the past, more voices from the present.” On the site, you can find deep dive videos like “How we became America” from the American Battlefield Trust that you can watch with the family.

This article was originally published on June 28, 2021