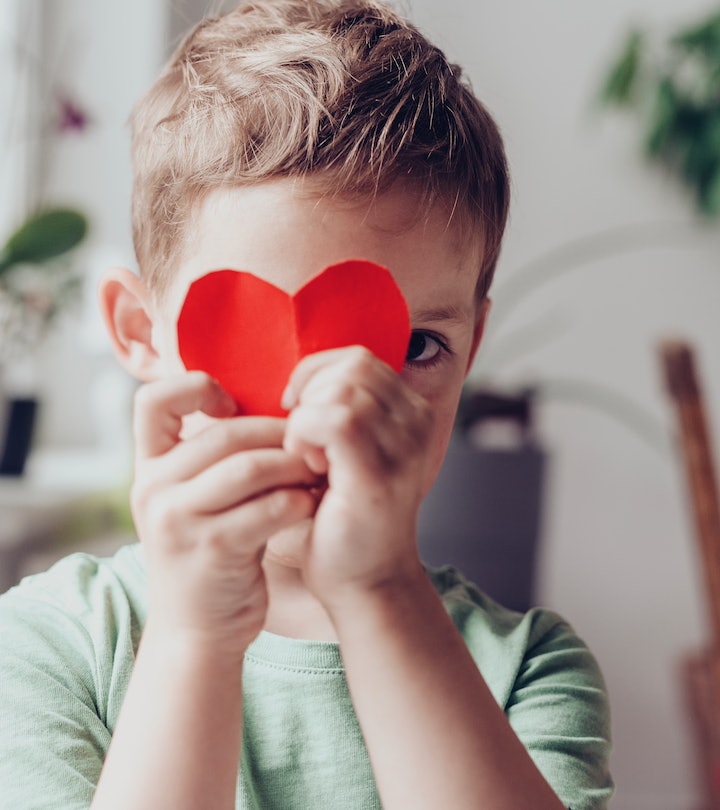 How To Explain The History & Meaning Of Valentine's Day To Kids

It’s more than just a classroom card exchange, you know.

Is Valentine’s Day simply a fun-filled day of card exchanges with classmates, red and pink clothing, and lots of heart-shaped candy? To young kids, it absolutely is. But as your kids grow and start asking more (and more) questions about love, life, and even history, knowing how to explain Valentine’s Day to kids can come in handy.

What Is Valentine’s Day?

Also called Saint Valentine’s Day, the Feb. 14 holiday originated in Europe, but is now celebrated by people across the world. The celebration of Valentine’s Day dates back to the 1300s, according to Britannica Kids. European legend has it that on February 14, birds would pair off to start their new families. This is a super sweet and easy origin story to tell your kids, but there are also some religious tie-ins to the holiday to talk about.

The name of Valentine’s Day actually comes from the Roman Catholic Church, according to History.com. Though the facts here are a bit fuzzy, but basically, the church honored a saint (but maybe as many as three) by the name of Valentine. Some historians argue that there are two or three distinct saints — each with his own heroic efforts to overcome injustices related to love or marriage — while others insist there is just one. Ultimately, the important thing to explain to kids is that the holiday is named for Saint Valentine and was historically celebrated with a feast in the saint’s honor.

Yet another explanation of the holiday’s origins and Feb. 14 date is rooted in a pagan festival called Lupercalia, according to History.com. The festival was a celebration of fertility that lauded the Roman God of agriculture, Faunus, with a ritual of an animal sacrifice that was believed to make women more fertile and ended with a matchmaking ceremony. (Perhaps you don’t need to get into all of those particulars with your kids, but it’s pretty interesting nonetheless.)

If your child comes across a depiction of a cherubic little dude armed with an arrow, poised to shoot into someone’s heart to “celebrate” a holiday, chances are, they’re going to have some questions. (And frankly, so do I.)

The legend of Cupid started in Greek mythology with a god called Eros, the son of the goddess of love, Aphrodite, according to Time, and he had the power to make people fall in love. When Greek mythology was translated during the Roman era, the name of Eros translated to the word “desire,” which is “cupid” in Latin. The new adaptation of the myth featured a small boy who followed his mother’s instructions to make people fall in love with one another, instead of a man-like god.

But what about the bow and arrow? You can thank the creativity of Renaissance painters for this depiction of Cupid, who added wings and a bow to their imagery of the myth.

How Is Valentine’s Day Celebrated?

Traditionally, Valentine’s Day is celebrated by exchanging cards (called Valentines, naturally), candy, and other gifts with loved ones. Often, romantic partners will exchange gifts like jewelry and flowers, or perhaps enjoy a nice night out together. However, there are plenty of different ways that families and friends engage in this universal celebration of love.

The thing is, what Valentine’s Day means and how you celebrate changes with time. As a kid, I always looked forward to eating tons of chocolate and handing out character-covered cards at school. When I was in high school, I cherished an early morning Starbucks run with my dad before school; it was the sweetest holiday treat. Then, there was a period of romantic, candlelit dinners that came with pre-children adulthood. Valentine’s Day eventually came full circle when I became a parent, shopping each year for the perfect set of Paw Patrol Valentines for my boys to pass out in class.

At the heart of Valentine’s Day through every stage of life, though, is love. Love for your family, for your friends, and for your fellow humans just trying to get through each day the best way they know how. Sharing that love with your kiddos in a way that makes sense for you and your family is definitely the sweetest way to explain what Valentine’s Day is all about.

More Like This
21 Rainy Day Summer Activities
From Captions To Gifts, These Are All The Kindergarten Graduation Ideas You Need
12 Last-Minute Vacation Spots For Memorial Day
When Is National Brother's Day?