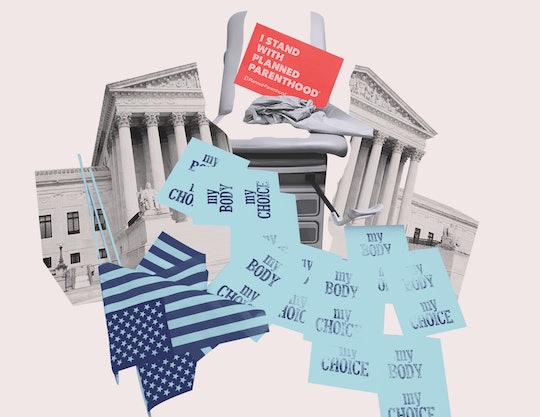 5 Ways To Fight For Abortion Rights Now That The Supreme Court Has Overturned Roe V. Wade

Here’s how to mobilize right now.

On June 24, the Supreme Court voted to overturn Roe v. Wade, the nearly 50 year precedent protecting abortion rights in the United States. Dissenting Justices Breyer, Kagan, and Sotomayor wrote “with sorrow” that “young women today will come of age with fewer rights than their mothers and grandmothers.” Even Justice John Roberts, who concurred with the ruling but not with the decision to overturn Roe, described the reversal as “a serious jolt to the legal system.” But as appalling and shocking as it is to be in this position after all of these years, there are ways you can help to protect access to such vital reproductive health care.

Of course we had a good idea this was coming. In May, Politico reported that a leaked initial draft majority opinion written by Justice Samuel Alito confirmed that the Supreme Court had voted to overturn Roe v. Wade and, indeed, the final majority opinion, written by Alito, retains language that Roe was “egregiously wrong.”

“It is time to heed the Constitution,” he wrote, “and return the issue of abortion to the people’s elected representatives.

Already, 10 states have completely or mostly banned abortion with another 10 poised to ban, half within the month. Another 20 have protected the right to abortion with some states — like Connecticut, Illinois, and California among others — expanding access. For the remaining 10 — Montana, Arizona, Nebraska, Kansas, Wisconsin, Minnesota, Pennsylvania, Virginia, North Carolina, and Florida — the fate of abortion care is uncertain.

It can feel overwhelming to confront this new reality, but there are still things you can do to ensure people have access to the health care they need.

1. Donate to abortion funds for the most vulnerable states.

The most effective way to ensure your donation dollars are making the biggest difference is to target those in states and regions where abortion rights have been most severely curtailed. More often than not, in states where abortion has been banned (or is likely to be banned) bordering states have done the same. This puts even more financial restraint on those who must travel to obtain abortion services. Here are some to consider:

Abortion providers across the country are on the front lines as more and more states roll back access to reproductive rights. These providers need to be protected now more than ever, particularly independent providers in small, community-based clinics where they may not have the support of larger organizations like Planned Parenthood.

Donate to places like the Keep Our Clinics campaign, which “provides funding to independent clinics to cover tangible expenses like increased security, building repairs, PPE and hazard pay for staff working during the pandemic, legal fees, and community education and advocacy.” You can also donate to the National Abortion Federation, providing security, medical training, and technical assistance to beleaguered abortion providers across the country.

If you want to be as visible as possible, protest. In the days since the Supreme Court’s decision, protests have erupted across the country from abortion rights activists. You can plan a protest in your own town or join a rally through organizations like Planned Parenthood Action, which lists hundreds of Bans Off Our Bodies events across the country, and Women’s March, which has a rally planned for Saturday, July 9 in Washington, D.C.

4. Remind lawmakers that a majority of Americans support access to abortion.

This will be especially important in states where the fate of abortion rights are currently uncertain. Find all of your representatives at the federal and state level at CommonCause.org and let them know you support choice. To contact your member of Congress, go to the House.gov website, enter your zip code, and email your representative. Or call them. Or ideally do both again and again. Tell your friends and family to do the same. It’s a good way to highlight to all lawmakers that abortion care is not divisive: a comfortable majority of Americans, 61% according to research from Pew, support abortion access in all or most cases.

Protecting abortion rights is going to take a sea of people talking about it all the time. Educating yourself on why access to reproductive health care is a basic human right, then educating family and friends with that knowledge.

You can find educational resources on the International Planned Parenthood Federation. It’s also important to take to social media, to use your platform on Twitter, on Instagram, on Facebook, on TikTok to speak out for abortion rights, no matter who you are. To speak for those who might not be able to speak out for themselves for fear of repercussions.

Roe v. Wade may have fallen, but we can still rise together and support each other as we step up to this latest challenge to our bodily autonomy and human rights.

This article was originally published on May 3, 2022