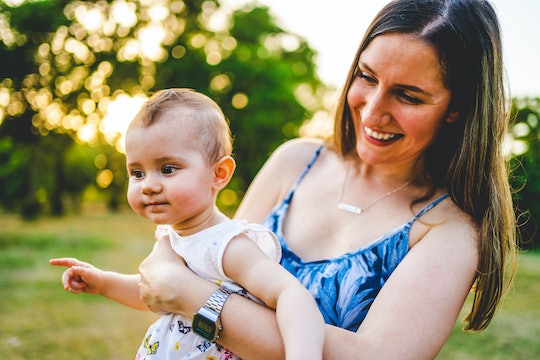 It Took Having A Baby To Finally Be Diagnosed With ADHD

Despite being treated for postpartum depression, I felt like I was drowning.

For every overwhelmed new mother, there is a well-intentioned, veteran mom who assures her to hang in there, "It gets better.” At least, that’s what I was told, over and over, when I’d confess that, despite being treated for postpartum depression (PPD), I felt like I was drowning.

So, I waited. I “hung in there.” But even as my baby approached her first birthday, the overwhelm didn’t fade, it intensified. I couldn’t keep up with my responsibilities, my patience was thin on a good day, and nonexistent most others, and I was so anxious that it felt like I was walking around with electricity running through me at all times.

Then I was given a diagnosis that completely floored me and changed everything: attention deficit hyperactivity disorder (ADHD).

ADHD, while a lifelong condition, is often thought of as a childhood disorder that is most apparent in a school setting. One peer-reviewed article notes, “symptoms begin at a young age and usually include lack of attention, lack of concentration, disorganization, difficulty completing tasks, being forgetful, and losing things.” None of this applies to what I experienced as a child.

From kindergarten through grad school, I was well-behaved, and school was never hard for me. Even once I started my career, I was promoted twice in my first two years working full time and, honestly, keeping everything organized was relatively easy. Nothing about my academic, professional, or personal performance pre-baby stood out, which was why my ADHD diagnosis at 30 years old left me completely bewildered.

It wasn’t until I became a mom that I started experiencing the more obvious signs of ADHD: lack of attention, disorganization, difficulty completing tasks, and being forgetful. Or, what many call “mommy brain.”

There is a significant gender bias in the diagnosis of ADHD, and it’s not uncommon for symptoms in young girls to be overlooked because they tend to present differently than in boys. Unlike hyperactive boys, girls with ADHD are often considered daydreamers or overly chatty by their teachers. Also, ADHD is famously (and incorrectly) thought of as a behavioral disorder, when it’s actually a cognitive disorder. One common cognitive symptom is emotional dysregulation, or having little control over the intensity of your emotional responses, which is easily brushed off in girls as changing hormones. When I look at these symptoms and characterizations, they do align with what I experienced as a child.

It wasn’t until I became a mom that I started experiencing the more obvious signs of ADHD: lack of attention, disorganization, difficulty completing tasks, and being forgetful. Or, what many call “mommy brain.” The emotional dysregulation was still there, too, only it was intensified. I had no patience, I would either rage out or burst into tears at the slightest criticism, and to say I was emotionally drained at the end of a day of parenting a needy baby is a huge understatement. Looking at this from the surface, it’s no wonder my doctors just assumed it was PPD and put me on antidepressants.

My depression only deepened, though, even with medication. My performance at work was dramatically worse because I flat-out couldn’t remember small details and made a lot of (seemingly) careless mistakes. I put so much energy into making sure we were always stocked up on diapers, wipes, formula, and the next size up in clothing for my daughter but I couldn’t so much as make a dentist or eye doctor appointment for myself. The baby was always bathed, fed, and cared for in every sense of the word, but my house was a complete disaster with piles of mail that felt too overwhelming to go through and dust and dirt everywhere. Not to mention, the mere thought of showering and getting ready for a day was almost laughable — not because I didn’t have the time, but because the task seemed so huge.

I was resentful, often wondering to myself, What had motherhood done to me?

I was also self-medicating with food, or “emotionally eating.” After spending more than a decade being told I had eating and exercise disorders because I counted every morsel of food I ate, I was now diagnosed with binge eating disorder. I was seeing a therapist at least once, if not twice, a week because everything felt out of control. I could not understand how I, a person who was once always on schedule, high achieving, and organized, got to this point.

I was resentful, often wondering to myself, What had motherhood done to me?

It wasn’t until my so-called emotional eating got bad enough that my psychiatrist prescribed me a stimulant (ADHD medication) approved for binge eating disorder that it all clicked into place. I came back after a month of being on medication and told my doctor that I felt like a completely different, calm person. Stimulants typically don’t make you feel calm when your brain doesn’t need the hit of dopamine, like an ADHD brain does.

After this revelation, things got better.

It’s been four years now and, while I am still not the organized woman I once was, I am also no longer the depressed, frazzled mom that I became. I am more aware of my emotions and understand why my reactions are so strong, which makes it easier for me to apologize to my kids when I yell (because I do still yell sometimes). Appointments are booked months in advance, my husband and I maintain two family calendars to help me stay on track, and I regularly set reminders to help me with the one-off tasks of motherhood. My diagnosis has also allowed me to go easier on myself when I fall short, because it’s usually not a reflection of me as a mom, but simply the result of a lack of dopamine.

I get to be her advocate and ensure nothing gets overlooked simply because she’s a girl. I feel like it's the least I can do for her, since, after all, she did the same for me.

By far, the best thing that has come from all of this is my vigilance for my two daughters. I know that there is a hereditary aspect to ADHD and there is a high chance one or both of my daughters will also have the disorder and, because of the gender bias in diagnosis, there’s also a high chance their symptoms could be overlooked by teachers or possibly even health care professionals.

Even though she’s too young for a formal diagnosis, my oldest daughter has already started showing some of the commonly overlooked signs of ADHD. Because of everything I know now, I am more equipped to help her work through intense emotional reactions, to stay patient when she just won’t sit still, and to empathize when she struggles with things that come easily to other kids. I get to be her advocate and ensure nothing gets overlooked simply because she’s a girl.

I feel like it's the least I can do for her, since, after all, she did the same for me.