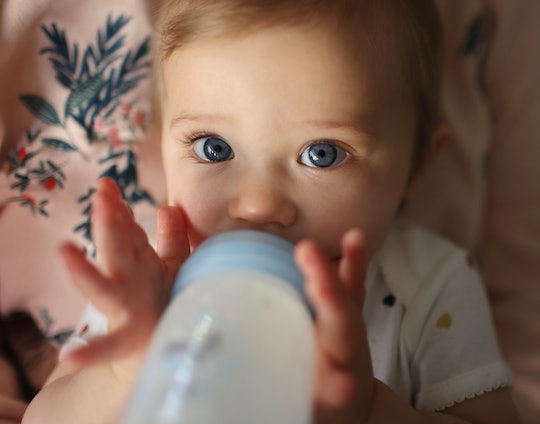 Amid the ongoing national formula shortage in the United States, formula supplies have dwindled and caregivers are scrambling to get their hands on what they need to feed their babies. Between formula recalls and supply chain issues, the situation has reached a fever-pitch. It makes sense that parents who have exhausted every resource available to them but still cannot find formula might turn to social media for solutions. But the homemade baby formula recipe from 1960 that’s making the rounds online isn’t the answer to this desperate situation. In fact, experts say it can be dangerous.

“I'm not surprised, as social media is full of disinformation, but I worry for infant safety,” Dr. Candice W. Jones, a board-certified pediatrician tells Romper in response to the viral formula recipe. “I strongly advise against DIY infant formula recipes.”

The theory here seems to be that if the commercial formula available today hasn’t always been around, parents can simply revert back to the “old school” way of feeding babies if they can’t find formula. Hence, the snapshot of the formula recipe below from 1960 has been shared across various social platforms by multiple users.

It is unclear where the image originated, but the advice for parents to mix Karo syrup with evaporated milk and water (as well as offer tea, water, and orange juice to their babies) it is not considered safe by modern infant nutritional standards.

Is it safe to use DIY formula recipes?

The U.S. Food and Drug Administration (FDA) released an advisory on Feb. 24 warning parents and caregivers not to use homemade baby formula. “The agency has requirements for certain nutrients in infant formulas, and if the formula does not contain these nutrients at or above the minimum level or within the specified range, the infant formula is adulterated,” the advisory stated. “Homemade infant formula recipes have not been evaluated by the FDA and may lack nutrients vital to an infant’s growth.”

Unfortunately, this isn’t the first time in recent years that homemade formula recipes have gone viral on social media. At the start of the Covid pandemic when panic-buying caused store shelves to empty, similar DIY formula recipes circulated online. Though there was not a true formula shortage in 2020, today there is, leaving some parents feeling desperate enough to try DIY alternatives.

“The hardest thing about homemade baby formula is that the ingredients needed, like vitamin additives and novel carbohydrate sources, are much harder to find than commercial formula, especially in emergencies,” board-certified lactation consultant Danielle Downs Spradlin told Romper in March 2020. “If the formula is not mixed correctly, the consequences can be catastrophic.”

Spradlin’s take on homemade baby formula still holds true more than two years later, according to Jones. “Infant formulas that are regulated by the FDA have the right amount of nutrients, electrolytes, and essential vitamins infants need for growth and development and they are screened for contaminants,” Jones explains. “DIY formula recipes or even altering regular formula to make it last longer can be dangerous. Babies can develop anemia, seizures, or even die.”

Dr. Victoria Regan, a pediatric specialist with Children’s Memorial Hermann Hospital in Houston, Texas, tells Romper that although homemade formula recipes like the one above were once recommended prior to the advent of modern formula, making formula at home without using sterile techniques comes with the potential for “bacterial contamination that can lead to serious intestinal infections.”

“At this time, pediatric providers, the AAP and the CDC do not recommend any ‘homemade’ baby formula alternatives as there is a risk for contamination that can lead to food borne illnesses that can cause dehydration,” Regan explains.

What to do if you can’t find baby formula

The first thing to know is that your pediatrician’s office may have samples of specific brands to offer if you can’t find formula in stores. They should be your first call, followed by local food banks, non-profits, and your local WIC/SNAP offices. Jones says that parents can also try using “a similar formula in a different brand or generic form,” or order formula online from a reputable U.S.-based retailer. (“Foreign formulas do not have the same regulatory oversight,” she notes.)

Though purchasing baby formula from foreign retailers is not recommended, Gerber formula manufactured by Nestlé is being flown into the United States from the Netherlands and Switzerland to help bolster supplies, according to a statement from Nestlé provided to Reuters. Additionally, there is more hope on the horizon for parents. Baby formula producer Abbott and the FDA recently announced a plan to safely resume production in their shuttered facilities in the coming weeks, according to an Abbott press release. “From the time Abbott restarts the site, it will take six to eight weeks before product is available on shelves,” the company stated.

In the mean time, one thing you shouldn’t do if you can’t find formula is try to water it down to make it last longer. The American Academy of Pediatrics (AAP) advises parents not to try to “stretch” formula by adding extra water, as this can lead to malnutrition.

“Just for this emergency period, the AAP has offered guidance to briefly use whole cow's milk in older infants (6 months and older) but to make sure the baby has adequate iron intake in the diet or use an iron supplement to avoid anemia,” Jones says. “Also, soy milk can be used for a few days but it should be fortified with protein and calcium.”

What about milk alternatives? Dr. Natasha Sriraman, a pediatrician, author, and AAP spokesperson, tells Romper that plant-based milks are not recommended for babies for similar reasons. “Alternatives such as almond or other plant milks are often low in protein and minerals which can cause nutritional deficiencies in babies.”

If you can get your hands on it and are considering using toddler formula for older babies, Sriraman says these should be used with caution. “While toddler formulas are not recommended for infants, if there is no other choice, toddler formula is safe for a few day for those babies close to a year of age,” she says.

Though the AAP’s emergency guidance is safe to follow, Jones urges parents to lean on their pediatricians during this time. “Please talk to your pediatrician for guidance, especially if your baby needs a specialty formula for allergy,” she says.

Dr. Natasha Sriraman, pediatrician, AAP spokesperson, and author of Return to You: A Postpartum Plan for New Moms

More Like This
Abbot's Formula-Producing Plant Can Reopen In As Early As 2 Weeks — Now What?
Here's When Your Baby Might Start Sleeping Through The Night For Real
Can You Help Your Baby’s Hair Grow?
Can The Way You Sleep Really Turn A Breech Baby?

This article was originally published on May 12, 2022