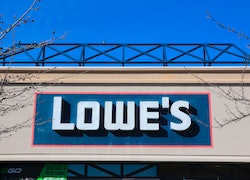 Lowe’s is definitely a mecca for dads, like Target is a mecca for moms — at least for the dads in my life. I know it can serve as some sort of retreat for busy dads, and they’re like kids in a candy store when it comes to all the tools, appliances, plants, lumber, fixtures, and more. If a day full of fun and dad’s getting a little much-deserved “me time” is in order on Father’s Day, they may be wondering if Lowe’s is open on Father’s Day.

Perhaps they want to grab a new and improved grill to cook up a Father’s Day feast, or he’s itching to work on that DIY project he’s had on the backburner for months. Well, don’t worry, dad, Lowe’s has got you covered.

Luckily for dad, Lowe’s is open on Father’s Day 2022 for regular hours — 6 a.m. to 10 p.m. In fact, Lowe’s is open almost 365 days a year, because the home improvement store is only closed on Thanksgiving Day and Christmas Day. Perfect for those grill malfunctioning emergencies on Memorial Day.

So not only can he unwind and peruse the aisles window shopping, he can also score some major deals with all the Lowe’s discounts for Father’s Day going on.

Dad can save $100 on an EGO POWER + cordless electric lawn mower, or $151 on a Whirlpool top-load washer — maybe getting a good deal on a sleek appliance will inspire him to do more laundry. Does he hate his chore of vacuuming? He can grab an iRobot robotic automatic dirt disposal vacuum for $200 off. That’s a pretty sweet steal and a win-win for everyone in your home.

So whether Dad just wants some time to himself this year at his favorite store, or if he just wants to pick up some great deals to work on that ever-growing to-do list for the house, Lowe’s has got him covered this Father’s Day.

More Like This
Win Halloween This Year With These Funny Costumes
24 Amazing Harry Potter Costumes For Fans Of All Ages
15 Adorable CoComelon-Themed Costumes You Can Buy Or DIY
Here's Why Patience Is Key When Picking Out A Pumpkin, According To Experts