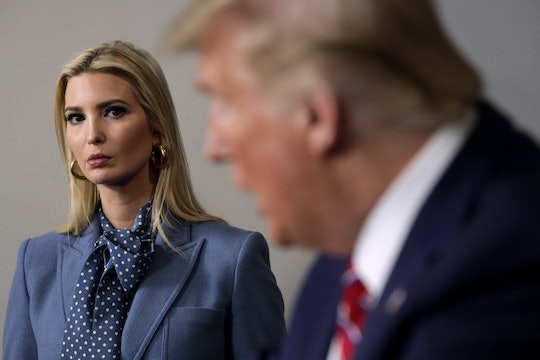 “This time around, I am choosing to prioritize my young children.”

On Tuesday night, Donald Trump announced his intention to run for president once again in 2024. This announcement, which he made at his Mar-A-Lago estate in Florida, was anticipated by political wonks and the general public for quite some time and, for most, came as no great surprise. More surprising, perhaps, was an announcement from his oldest daughter, Ivanka Trump, that same evening on Instagram. Despite being part of the Trump Administration, Ivanka won’t be involved in her dad’s 2024 presidential campaign.

“I love my father very much,” the text only post reads on Ivanka’s Instagram Story. “This time around, I am choosing to prioritize my young children and the private life we are creating as a family. I do not plan to be involved in politics. While I will always love and support my father, going forward I will do so outside the political arena. I am grateful to have had the honor of serving the American people and will always be proud of many of our administrations accomplishments.”

Ivanka has been intimately involved in her father’s political career since 2015, when she and her other adult siblings campaigned for Donald Trump as the Republican nominee. After he was elected, she served as the Director of the Office of Economic Initiatives and Entrepreneurship and Advisor to the President in his administration from 2017 to 2021, the duration of his term.

Her decision, therefore, may seem unusual to some — surely, Donald Trump has had few more steadfast public supporters than Ivanka. But in addition to being a mother of three young children — Arabella, Joseph, and Theodore — and a former businesswoman who may well want to return to her previous career, differences in her father’s political ends and style could be seen from time to time. She has discussed the fact that she does not see herself as purely aligned with either Republicans or Democrats, and is rumored to have refused to speak at her father’s “Stop the Steal” rally on Jan. 6, which prompted an attack on the Capitol. During the Jan. 6 hearings, she disavowed her father’s claim that the 2020 election was “stolen” by President Joe Biden and the Democrats. Even the wording of her recent announcement “many of our Administration’s accomplishments” (as in categorically not all accomplishments) has some questioning if her enthusiasm for her father’s brand of politics may be fading.

Donald Trump’s announcement comes on the heels of worse-than-expected outcomes for Republicans during the midterm elections, causing him to lob insults at a number of Republicans who did do well — claiming he is responsible for their successes — whom he may see as competition in a Republican primary. Certainly, 2024 is shaping up to be a fascinating election cycle.