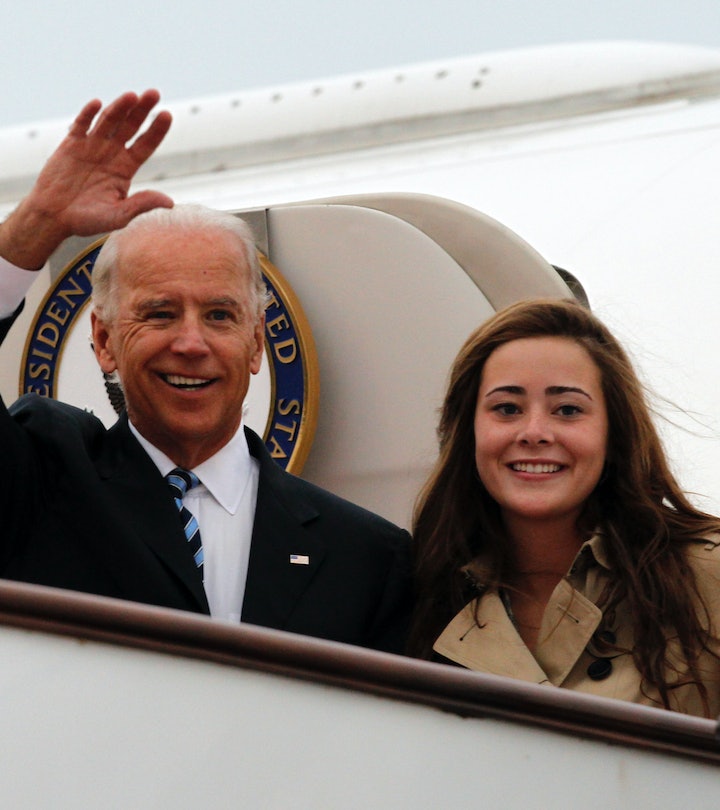 Biden Is Hosting A White House Wedding For His Granddaughter Naomi

After all, Grandpa Joe has said he’s “crazy” about his grandkids.

While many in the nation are familiar with President Joe Biden and his wife, First Lady Dr. Jill Biden, there's a slew of younger faces many may not immediately recognize. So, who are Biden's kids and grandkids? The 46th president of the United States boasts a fairly large family. In fact, the world might see them when President Biden throws a wedding reception for his granddaughter, Naomi, on Nov. 19.

In a recent episode of the SmartLess podcast, Biden referred to speaking with his grandchildren as his “best recreation” since taking office. “They're crazy about me and I'm crazy about them,” he said. “Every single day, I contact every one of my grandchildren.”

Here’s everything you need to know about Biden’s family before the big day.

Beau Biden died after a battle with brain cancer.

Born Joseph Robinette "Beau" Biden III in 1969, Beau was Biden's eldest child. He died at the age of 46 in 2015, following a battle with brain cancer. Beau worked as a federal prosecutor and in 2006 was elected Delaware's attorney general. He also joined the Delaware Army National Guard in 2003 and was deployed to Iraq in 2008, where he earned the Bronze Star. At the time of his death, he left behind his wife, Hallie Biden, and two children.

As President Biden departed Delaware for his new home in D.C., he choked up while giving a farewell address and paying tribute to his son Beau. "I only have one regret, that he's not here," Biden ahead of his inauguration. "Because we should be introducing him as president."

Hunter Biden worked as a lawyer.

Born in 1970, Robert Hunter Biden attended Georgetown Law before transferring to Yale Law, where he finished his degree in 1996. He worked as a lawyer, for the Department of Commerce during the Clinton administration, as part of a lobbying firm, and is the co-founder of a private equity firm. He met and began dating Kathleen Buhle while volunteering at a church in Portland, Oregon, according to The New Yorker. Roughly three months after their relationship began, Kathleen got pregnant and the pair married in the summer of 1993. He and Buhle divorced in 2017.

Hunter married Melissa Cohen in 2019, according to ABC News. He has five children. He gained significant notoriety during his father's 2020 presidential bid. Hunter found himself the target of multiple smear campaigns and attacks due to his business dealings and openness about previously struggling with alcohol addiction and substance abuse. Unsubstantiated claims and blatant conspiracy theories have become a mainstay in public discussion of the president’s son in right-wing media and social media spaces.

Naomi "Amy" Biden was just 1 when she died.

Biden's daughter Naomi, who was born in November 1971, was just over 1 year old when she was tragically killed in a car accident that also claimed the life of Biden's first wife, Neilia.

Ashley Biden is the founder of Livelihood.

Ashley Biden, born in 1981, is the only child of Biden's marriage to Dr. Jill Biden. She graduated from the University of Pennsylvania with a master's in social work in 2010. After a brief stint as a social worker for Delaware's Department of Services for Children, Youth and Their Families, Ashley was named the executive director of the Delaware Center for Justice in 2014, according to Delaware Online. She also founded Livelihood, a company that designs and sells American-made clothes with a portion of proceeds going toward various U.S.-based community organizations, not long after Beau's death. She married her husband, Dr. Howard Krein, in 2012, according to The New York Times. Ashley also got a ton of fans after she danced her way across the stage when the 2020 presidential election results were announced.

Naomi Biden is getting married.

Born to Kathleen and Hunter in 1993, Biden's granddaughter Naomi has not been shy about publicly declaring how proud she is to call the president her grandpa. "I am proud to be your granddaughter every single day @JoeBiden," she tweeted in August 2020. "But tonight, I am just as proud to be an American." She graduated from Columbia Law School in 2020 and has previously interned for Hillary Clinton’s presidential campaign, according to People.

According to reporting from CNN, Naomi actually moved into the White House in August of 2021. In early September, Naomi announced over Instagram that she’d become engaged to her longtime boyfriend Peter Neal. The following April, it was announced that Naomi’s grandparents would be hosting a White House wedding reception for the pair, who currently live in Washington, D.C.

“Peter and I are endlessly grateful to my Nana and Pop for the opportunity to celebrate our wedding at the White House,” she tweeted. “We can’t wait to make our commitment to one another official and for what lies ahead.” The wedding was set for Nov. 19, one day before her grandfather’s 80th birthday, on the South Lawn overlooking he Washington Monument and Lincoln Memorial. The day will happen in three parts, according to CNN – a late morning ceremony will be followed by an intimate private luncheon with the wedding party and family, culminating in an evening reception, both in the White House itself. This will be the 19th wedding to take place at the White House.

Finnegan Biden was named after her great-grandmother.

Kathleen and Hunter's daughter Finnegan, born in 2000, was named after President Biden’s mother, Catherine Eugenia Finnegan Biden. She has been known to dish up a few secrets about their grandfather — namely his love of sneaking ice cream and frequently calling his grandkids. In 2021, just days before President Biden’s inauguration, Finnegan was seen volunteering alongside her grandfather at the Philabundance food bank in Philadelphia.

She graduated from the University of Pennsylvania in 2021.

Born to Kathleen and Hunter in 2001, Maisy is close friends with former First Daughter Sasha Obama. According to The Chicago Tribune, the two girls attended the same school and played basketball together while Sasha's father and Maisy's grandfather worked together in the Obama administration. "Her best friend is Sasha Obama. Barack and Jill and the whole family, we had a whole get together," Biden shared in 2019 referring to his granddaughter's graduation party, according to The Hill.

During an interview with Today, Maisy shared that Biden — who they all call "Pop" — calls each of his grandchildren almost every single day.

Hallie and Beau's daughter Natalie, born in 2003, spilled the beans about her grandmother's penchant for pranks at the 2020 Democratic National Convention, telling viewers Jill is "not your average grandmother." How exactly? According to Natalie, "She's a prankster, she's very mischievous. When she goes on a run, sometimes she'll find like a dead snake and she'll pick it up and put it in a bag and she'll use it to scare someone."

Robert Biden II lost his father at a young age.

Born to Hallie and Beau in 2006, Biden's grandson Robert was only 9 years old when his father died.

Beau Biden hung out in the Oval Office.

Hunter welcomed a son with wife Melissa Cohen in 2020, Page Six reported. The couple had not revealed their child's name until President Biden's inauguration in January 2021. In fact, President Biden hung out with little Beau, his then 8½-month-old grandson named after his late son, in the White House after his swearing in ceremony. Since then, Beau has been seen flying with his Pop on Air Force one and greeting him at the White House after he returns from summits and other official events.

President Biden is also a grandfather to Hunter's child, whose name has not been shared publicly. An Arkansas court case ended in Hunter being declared the "biological and legal father" of an unnamed child born to Lunden Alexis Roberts in 2018, according to The Daily Beast.

This article was originally published on Jan. 20, 2021