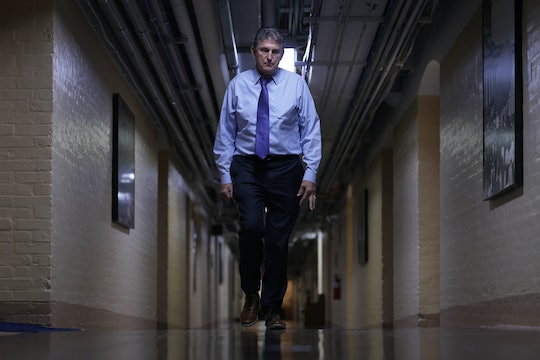 The West Virginia senator has been criticized for perpetuating harmful stereotypes about low-income families and betraying American children.

In signaling his firm opposition to President Joe Biden’s Build Back Better Act, West Virginia Sen. Joe Manchin has dealt a crushing blow to parents who stood to benefit by the legislation’s extension of the Child Tax Credit. And although his concerns with the president’s social spending package extend beyond the Child Tax Credit, Manchin allegedly expressed concerns that parents would spend the monthly tax credit payments they received on drugs instead of on their children.

According to a report from HuffPost, Manchin is alleged to have expressed concerns about how low-income families spend money during negotiations over the Build Back Better Act. Sources told the news outlet that Manchin told several Democrats he believed “parents would waste monthly child tax credit payments on drugs instead of providing for their children.”

If President Biden’s Build Back Better Act had passed, it would have expanded the Child Tax Credit, effectively providing more than 35 million families with 12 monthly payments of $300 per child under the age of 6 and $250 per child between the age of 6 and 17. Instead, the final payment of the 2021 Child Tax Credit, which was authorized via the American Rescue Plan passed in March, was sent out to families last week.

Manchin is also alleged to have expressed concerns that workers would abuse paid leave policies and reportedly said he believed workers would “fraudulently use” paid sick time. The West Virginia senator is reported to have specifically cited a hypothetical situation in which an individual pretended to be sick in order to take a hunting trip while on their employer’s dime.

When asked to comment on the allegations, Sen. Manchin’s office told Romper the senator supported both the child tax credit and paid leave. “Senator Manchin has made clear he supports the child tax credit and believes the money should be targeted to those who need it most,” Manchin’s Communications Director Sam Runyon said. “He has also expressed support for a paid leave program that has a dedicated, sustainable funding mechanism.”

Despite that supposed support, counter legislation Manchin submitted to the White House last week, is reported by The Washington Post to have excluded language extending the Child Tax Credit, a key priority of the president. What’s more, in October, it was reported that Manchin wanted to limit who could receive expanded Child Tax Credit payments by instituting a work requirement, and education requirement, and targeting the benefit only to families who make less than $60,000.

Advocates of efforts to extend the Child Tax Credit have accused Manchin of turning his back on struggling families. Fellow Democrat Rep. Rosa DeLauro, for example, argued Manchin’s opposition to the Build Back Better Act was a slap in the face for working families in West Virginia and beyond.

“Failure to pass this transformational package hurts the more than 346,000 children in West Virginia benefiting from the Child Tax Credit, goes against the more than 70% of West Virginia voters who support paid family and medical leave for all workers, and betrays working and middle-class families calling for the federal government to reduce the costs of child care, health care, prescription drugs,” DeLauro said. “After years of government working for the biggest corporations, passing the Build Back Better Act would finally help working families. Senator Manchin opposing it is a slap in their face.”

Assistant House Democratic leader Rep. Katherine Clark has also pushed back on Manchin’s alleged remarks and accused him of perpetuating harmful stereotypes. “Not only does this reinforce harmful stereotypes about Americans living in poverty, but it's blatantly false,” Clark said. “The data is very clear: Americans are using this historic tax cut for basic necessities, like diapers, rent, child care, and food.”

Clark is right. Research has shown Child Tax Credit payments were largely spent on essentials — not drugs. A study conducted earlier this year by the Social Policy Institute at Washington University in St. Louis found families spent 52% of their expanded Child Tax Credit payments on food with another 39% being spent on clothing or other essential items for their children.

What’s more, an informal poll conducted by Romper in March found many parents were planning to use their Child Tax Credit payments to cover the cost of childcare, medical expenses, and bills, or make vital repairs to their homes, such as replacing an old roof and having dangerous lead paint removed.

Unsurprisingly, parents are also outraged at Manchin for allegedly insinuating that they’ll spend their monthly Child Tax Credit payments on drugs. “I spent mine on AP test fees, independent reading books, and a homecoming dress that I’d have gawked at prior to this,” one parent on Twitter wrote in response to Manchin’s alleged comments. “But, sure. Drugs.”