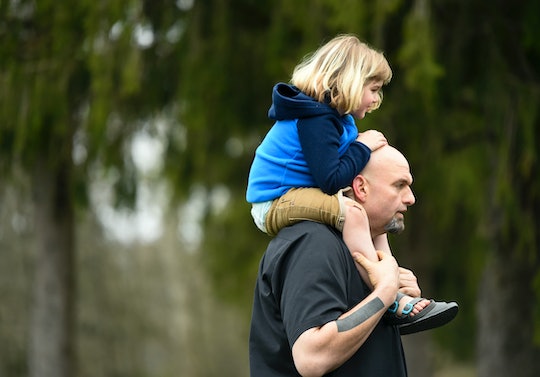 There’s no one better to have in your political corner than your kids.

Everyone knows politics can get pretty brutal, so candidates have to rely on all the help they can get from their supporters to withstand the glare of public scrutiny and handle the mounting pressure. Luckily the 34th lieutenant governor of Pennsylvania and current Democratic nominee for U.S. Senate, John Fetterman, happens to have three secret weapons in his campaign corner in the form of his encouraging kids. The father and politician recently took to social media to share the sweet messages that 13-year-old Karl, 11-year-old Grace, and 8-year-old August wrote on paper plates to pump him up before his big debate against Dr. Mehmet Oz.

The 53-year-old parent and Senate hopeful hopped onto Twitter to share the touching pictures of the paper plates with the handwritten notes from his children. “Love my Karl, August, and Gracie Pie for these good luck paper plates I am so, so lucky to have them cheering me on,” tweeted Fetterman.

Each of Fetterman’s kids shared their original pep-talk that likely caused a few tears to roll down the face of their delighted dad. “You got this dad! We all are watching you and supporting you,” wrote Fetterman’s oldest son. “You’ll do amazing. You’re great and that’s not a debatable topic,” wrote his daughter Grace. And with a little grammar error that only lended more credibility and made the encouragement even cuter, Fetterman’s youngest kid August scribbled: “We all supporting you. Be Brave. Be strong. Love you dad.”

Fetterman’s campaign has garnered tons of headlines, not only because he is running against a famous TV doctor and celebrity heart surgeon, but also because he suffered a health crisis only days before the state primary. In addition to his kids, Fetterman has leaned on his supportive and powerful wife, Gisele, to stand in his place and continue to spread his message while he was recovering from a stroke.

Fetterman’s Twitter followers were quick to comment on his kids’ written notes. Now they connected to the politician, not only for his liberal views, but as a parent too. “Awww. You brought tears to my eyes with these. Kids can be so empathetic and supportive when they are raised with love, respect and caring. Their [sic] says the most about the people you and @giselefetterman are. And Grace is right. It’s not at all debateable,” one supporter tweeted back.

“What your children say and think about you is your true legacy,” commented another.

Whether Fetterman succeeds in snatching up the Senate seat in Pennsylvania, at least he knows he’ll always be a winner at home with loving kids who have his back.

More Like This
Florida Teachers With “Unvetted” Classroom Books Could Face Felony Charges
Teacher Shot By 6-Year-Old Student Told School He Had A Gun, Was Told To "Wait"
How To Help Families Affected By The Devastating Earthquake In Turkey & Syria
Michigan Right-Wing Group Wants To Erase LGBTQ+ Sex Ed
What Parents Are Talking About — Delivered Straight To Your Inbox