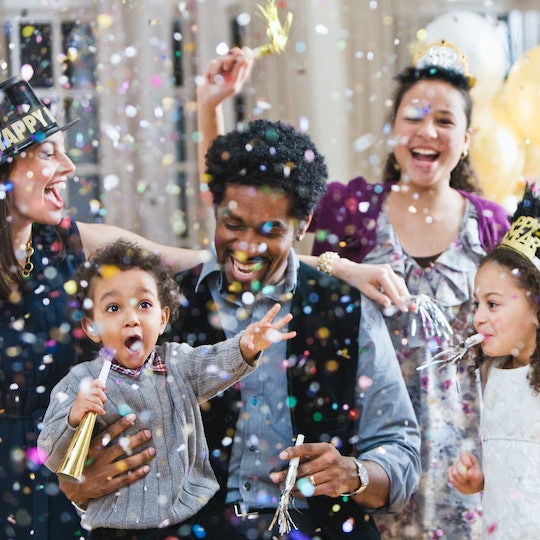 It doesn’t take a lot to throw a fun adult New Year’s Eve party; some good music and some prosecco and sparkling cider will do the trick, but a kid-friendly soirée isn’t quite as easy. From their inability to stay awake until midnight to their need for constant entertainment, if you don’t know how to throw a kids’ New Year’s Eve party, don’t worry, you’re not alone. It can be done, though, and the best approach is to plan it out in pieces so that it doesn't seem so overwhelming.

First, you’ll need some fun invitations for your kids’ New Year’s Eve party. This can be challenging because most NYE party invites feature champagne glasses clinking or have some other reference to alcohol, which is obviously not ideal for a kids’ party. If you search specifically for “kids New Year’s Eve party invitations” a handful will show up, but if you’re not in love with any of them, search for regular invitations that are colorful and bright somewhere like Etsy where you can contact the seller directly to customize the invitation for kids.

When it comes to decor for a kids’ New Year’s Eve party, there are plenty of general decorations that you can use whether the party is for adults or little ones. Think balloons, streamers, banners, and all of the shiny sparkly things that kids will love. You can also double up a bit with decor that can also serve as an activity like a pinata full of candy or a table runner that’s also a giant coloring sheet.

You’ll definitely need to come up with some ways to keep your little guests entertained during the party, and that means having a bunch of ideas for games and activities. Some easy ideas are coloring and activity sheets, DIY party hats and banners, and cutting up a bunch of tissue paper for them to make their very own mix of confetti to toss when the clock strikes midnight (or 9 PM, whenever you plan to ring in the New Year with them). Other fun ideas include:

Kids have to eat, right? Give them their snacks and drinks in style with fun tableware, straws, cutlery, and dessert toppers. To make it even more fun, serve up the food like you would at any adult party. Focus on appetizers and finger foods, easy-to-eat desserts, and maybe even mix up a few mocktails for your little guests, too. Here are some snack and drink ideas:

The best thing about kids’ New Year’s Eve party favors is that you don’t have to come up with an elaborate goody bag as you might for a birthday party, you can just stock them up on what they need to make noise and celebrate the new year. When they arrive, give them a little kit with a party hat or crown, a necklace, a noisemaker, and a confetti popper (if you’re brave enough for the mess it will create). Of course, there are also favors that kids love no matter what the occasion, like glow sticks, candy, and stickers. Don’t feel obligated to go big on this, because the whole night is filled with celebration, so they’ll be plenty happy by the time they go home.

On the surface, the idea of throwing a kids’ New Year’s Eve party might be a little intimidating, but when you break it down bit by bit, it’s definitely a manageable affair (after all, who needs prosecco when there’s musical chairs?). Just take all of your normal NYE activities and put a kid twist on them and your guests will be thrilled. Don’t put too much pressure on yourself, especially since the kids probably won’t even be able to stay awake until midnight, so the party will be over before you know it.

More Like This
From Captions To Gifts, These Are All The Kindergarten Graduation Ideas You Need
21 Rainy Day Summer Activities
20 Best Gifts For Stepmoms
10 Easy Vegetables To Grow At Home