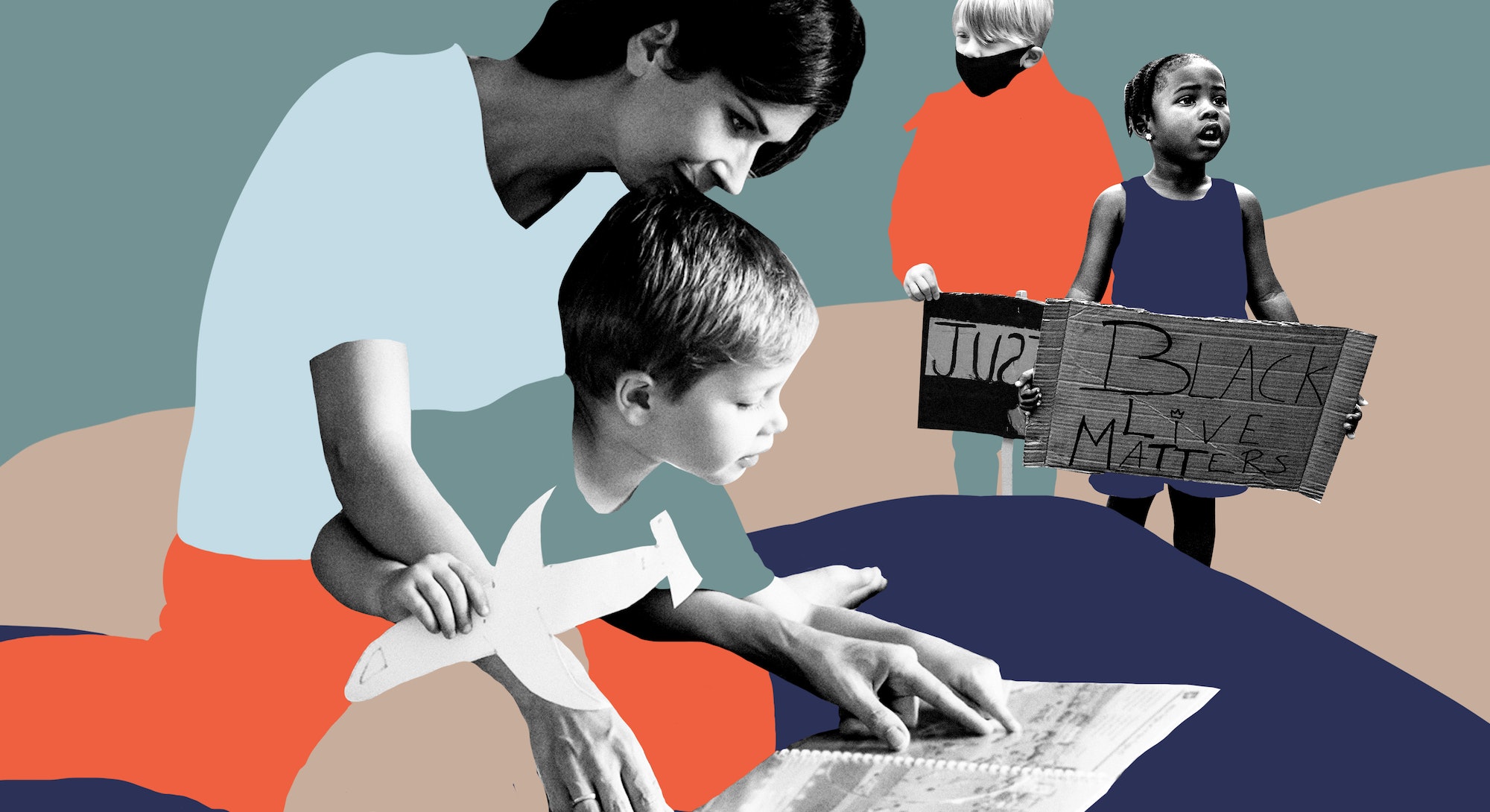 Remote Kindergarten Made Me Rethink Everything

For my son’s sixth birthday I made him a dinosaur cake. I bought a little kit and iced it in such detail that you could tell I was going through something just by looking at it. His father and I bought him too many presents, but they were all wrong: an art easel, a soccer goal, a kiddie pool — not a Transformer or Pokemon in sight. “You bought me things you want,” he said to us, rueful in the kitchen. He was so right we had to laugh.

It was June and despite the fact that nothing was normal, or maybe because of it, I wanted to wrap us up in wholesome signifiers of normal childhood. He was due to graduate kindergarten via Google Hangouts in a few days, despite my having all but given up on it a few weeks before. Remote learning was no substitute for the real thing, and family morale had been lagging — mine especially, caring for the kids full-time and trying to work on the weekends for months.

But that morning he said he wanted to “go to school.” He knew the class would sing “Happy Birthday” to him through their screens, with more enthusiasm than our little family of four could have given him. I listened outside his bedroom door, thinking about how we move between battening down the hatches, convincing ourselves our little family unit is all we need, and then heartbreak when we remember it is not enough.

A few days later, his little brother and his dad and I went to a family Black Lives Matter protest; when I handed him a piece of cardboard and a Sharpie, he wrote, “STOP THE POLICE” unprompted, adding a big frowny face below it. Being at the protest was reinvigorating and clarifying. We were safe. We were lucky. We were almost done with the school year, and I could stop feeling half-guilty when we didn’t log on.

We move between battening down the hatches, convincing ourselves our little family unit is all we need, and then heartbreak when we remember it is not enough.

When I watched my son hold up his sign on a street corner, his little body stretched as high as it would go, his face defiant behind his mask, cars honking at him as they passed, my heart galloped in my chest, and all my guilt about his unopened schoolwork dissipated. He was the one who insisted we show up. He could write well enough to make a protest sign. His values were sharper than many of the adults I knew, which was, for better or worse, something that would prove useful in his lifetime.

Me, I was reevaluating everything, trying to find my equilibrium. I set up a table in our driveway to collect petition signatures to bring free preschool to our county. I ordered a trampoline. We planted wildflowers in our front yard. I signed up to write to prisoners about police abolition. For maybe the first time in my life, I felt zero ambition when it came to my career. It’s always hummed, the background noise of my life, whether it was stymied or not, avowed or not. But what mattered now? Our health. My husband’s job, our health insurance, doing whatever we could to avoid our children being fully traumatized by this moment.

I stopped insisting we end our Uno games or hikes in the park to log on and do compulsory assignments. It was only kindergarten, granted, but for me this marked a significant internal shift. I wouldn’t have said it out loud, just like I wouldn’t have been proud to admit that “my worst nightmare” (now my reality) was being forced to be a stay-at-home mom, but part of me had believed that my son’s first year of school would be the beginning of his personal success. He had always been eerily observant, like the improbably precocious narrator of a middle-grade novel come to life. My politics prevented me from trying to send him to a different school than the one in our neighborhood, and my personality kept me from taking the teacher aside to tell her he could already read. Still, I think I was looking forward to her discovering his genius without my help.

I didn’t want to value achievement so much but some part of me, my knee-jerk mom brain, was a little sad at the first parent-teacher conference when she told us he was confusing his B’s and D’s. “He’s known them since he was 2!” I wanted to say, but I just nodded, obedient, ever the good student myself. That version of me would be shocked to know that now, when I think of what was important about kindergarten, I feel certain it was the things I initially felt were the most bleak: the systems; the codes; the communal compromise.

In another era (say, February 2020), I would have been concerned about my son's disruptions. But now, by June, I would laugh. I had come to respect it.

It’s the stark fact of a classroom full of children — their bodies, their voices, their attention spans — that creates the silly bureaucracy of to-the-minute schedules and assigned seats. That they had to use four colors in every illustration, that the Helper of the Day was the one to pass out the lunch boxes. That they had different hand signals for when they needed to go to the bathroom, or get water, or ask a question. After months of isolating with just my nuclear family, all the social mores and idiosyncrasies of their little society of 22 strike me as more tender now, and more valuable.

As I came to cherish the structure of school, I developed a simultaneous appreciation for the ways my son pushed up against it. He would show up to Gratitude Circle in funny costumes, hide his face, unmute himself and say something disruptive. In another era (say, February 2020), I would have been concerned. But now, by June, I would laugh. I had come to respect it. He didn’t want to write sentences about penguins any more than I wanted to make him do it. Not when we could be outside, painting or reading Where the Sidewalk Ends or asking Siri how many times the average human farts a day (five to 15, for the record).

Now that it is August, I have reached something like scholastic nihilism. I don’t care about what he learns in school this fall, I find myself telling other parents, in a tone that is new but uncontroversial. Everyone agrees. We just want to keep them enrolled so that the school gets the funding. They are so young, we say, waving our hands. They are fine. It’s going to be a drag, for my kid and for me. I am angry at the mismanaged pandemic response and all the loss it entails, when I have the energy to be, which is rarely. But my son could already do basic math, could read and write when goaded. His real loss is being around other people, people of all backgrounds; learning to coexist with them.

On the morning of his first day of kindergarten, I was a wreck. This is the first day of the rest of his life, I thought, not knowing the half of it. “STOP SAYING TODAY IS SPECIAL,” he yelled at me through tears, refusing to take a first-day-of-school photo in front of our black-eyed Susans. Now I think, Who could blame him? And also, Who could blame me? But my anxious fretting shifted into happy tears as I watched all of the families converging into one building from different houses in our neighborhood. My son bounded ahead of us, a citizen of the world now with his new, too-large backpack bouncing on his back, and I turned to see a neighbor mom weeping behind her sunglasses. I searched for something profound to say to her, but didn’t know what to say. I felt so happy. School was free! We had made it.

“Do you remember your first day of kindergarten?” my neighbor asked me, through tears. I got a flash of myself in a church dress and Mary Janes on the classroom rug, nervous. At 5, I was obsessed with following the rules, and behaving perfectly, and generally being good and liked and accepted, actually feeling desperate for it. It was me who was “discovered” in kindergarten, come to think of it — singled out and sent in a school bus to enrichment classes in another part of our tiny town in Alabama, terrified the whole time.

At the Google Hangouts graduation there was a slideshow, a slide for each student. The teacher clicked through, saying a few words of praise about each child. She opened with the handful of students who had been unable to come, who hadn’t done remote learning because their parents worked or they lived with their grandparents or their siblings needed the computer. Remote learning is dreary; I am a stay-at-home mother now. Those are our own little family crises, shitty but manageable. The bigger issues are the same ones as ever, pre-existing inequality exaggerated by the unequal effects of the pandemic.

When she got to my son, we all sat up straight. He wore a chef’s hat for the occasion; the teacher had suggested they dress up. I took photos of him in front of the MacBook Air and a video of the browser. She declared him to be a “good listener and a kind friend,” and we clapped and cheered. Months earlier I would have found those attributes paltry, the kind of thing you say to a kid who is academically unremarkable, but that afternoon I let them in, and felt with pride the importance of them, maybe above all else.