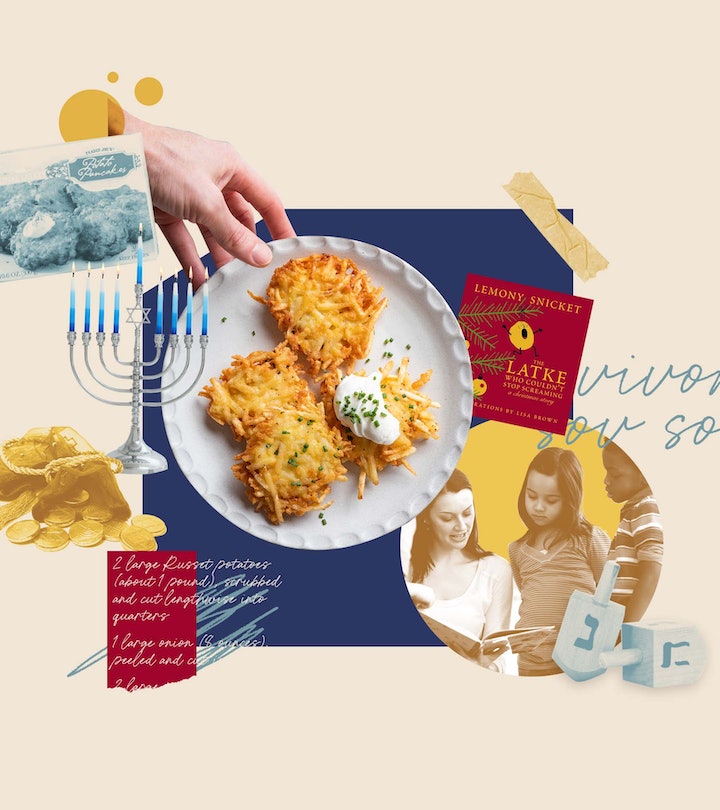 As The Only Jewish Kid In The Class, Latkes Made My Holiday The Star

So once my daughter was in kindergarten, I arrived in her classroom (then her sister’s) with everything I needed to make Hanukkah magical for everyone — at least for one day.

On a December afternoon, nearly every year between 2007 and 2015, I carried an enormous electric frying pan, a covered mixing bowl, a bottle of vegetable oil, and a spatula through the doors of my daughters’ elementary school in the Chicago suburbs. As winter break approached, their classmates all knew it was almost time for my annual visit, asking me on the playground after school when I was coming.

“Are you bringing the applesauce?” they’d yell, pulling at my sleeves. “Are we going to read the book?”

What they — and I — looked forward to every year was a ritual I had adapted from my own childhood, when my mother had visited my third grade classroom to make potato pancakes in her electric frying pan. A traditional food for Hanukkah, latkes were the kind of kid-friendly dish that bridged the gap between me and my majority non-Jewish classmates. Though she’d only been able to do it once before her return to full-time work made it impossible, I remembered it so fondly that I’d vowed to repeat it yearly for my daughters.

It hadn’t always been easy to be one of the only Jewish kids in my school. The handful of us fended off questions about Santa every year, warned by our parents not to ruin the fun for our classmates.

“Well, what do you have?” they’d press on. “Who brings your presents?”

It was decidedly less romantic, made worse by the endless carols, gingerbread men, and decorations in the classroom and hallways. My mother’s visit that filled the room with a smell not unlike french fries — plus her reading of the Hanukkah story full of military might — was a consolation I’d never forgotten. For one afternoon, my holiday had been the star.

So, beginning in my older daughter’s kindergarten year, I arrived in her classroom and then her sister’s with everything I needed to make Hanukkah magical for everyone, at least for one day. By the third year, I had it down to a science, using boxed latke mix that didn’t oxidize like fresh potatoes did. With the electric frying pan in a tote bag and my big red mixing bowl of batter in my arms, I entered every classroom to the sound of excited whispers.

My mother’s visit was a consolation I’d never forgotten. For one afternoon, my holiday had been the star.

“Mrs. Lewis is going to teach us to make some delicious food for Hanukkah,” each teacher would announce, forgetting that most of these children had done this with me the year before.

In the back of the room, I’d lay out a towel and place the frying pan on top of it while the distracted students tried to focus on their lesson. Once I’d heated a thick layer of oil in the pan, I’d invite the students, one by one, to come back to my table and make their own latkes.

In first grade, I held their little hands as we spooned small piles of batter into the hot oil, watching joyfully as their faces lit up with the sizzle. My daughters stood proudly next to me, setting out paper plates and forks. Carefully, I helped each student flip their latke with an extra-long spatula, marveling at how nice and brown it was, how well they cooked it.

“Are you sure you haven’t made latkes before?” I’d ask, giving each one a little hug. “You’re great at this!”

By third grade, some students wanted to try spooning the batter into the pan on their own. Eniola smiled shyly at me as she patted the pile of batter down on top.

“It’s like fritters,” she said. “I make these for my sister sometimes.”

Unlike the wealthy, white suburb where I grew up, my daughters’ school was diverse in every way, with children of many races and spread widely across the economic spectrum. Eniola was already walking with her kindergarten-aged sister to and from school, nearly a mile each way. She loved my latkes and was always the first to ask me when I’d come to make them each year.

Then there was Anna, the only other Jewish student in my older daughter’s class, whose parents never joined me in the classroom for these holidays. “That’s not how you make latkes,” she said, scowling. “We buy them from Trader Joes.”

“Those are good, too,” I responded. “Do you want to try it this way, though?” She dropped a spoonful of batter in the pan half-heartedly and slumped away.

In my younger daughter’s class, though, she was one of four Jewish students, one of whom was her best friend Sophie. Sophie’s mom and I were good friends, and Amy would take time off from work each year to join me in our Hanukkah celebration. A former preschool teacher, she’d lead the kids in songs while I fried latkes.

Once every plate had two latkes and a dollop of applesauce, we’d pass them out to all the students and the teachers. Then I’d sit at the front of the room and read the only Hanukkah book I’d ever bring: Lemony Snicket’s now out-of-print The Latke Who Couldn’t Stop Screaming.

This image never failed to make me smile: a group of Black, white, Hispanic, and Asian students with plates full of latkes, screaming their indignation at one holiday being conflated with another.

In the book, a latke leaps out of the pan and through a window to confront the traditional Christmas decorations of the surrounding village. Each decoration suggests that the latke and its holiday is simply another version of a Christmas accoutrement, claiming the latke is like hash browns to surround a Christmas ham; the Hanukkah menorah is a riff on strings of Christmas lights; the story of ancient Jews playing with the spinning tops to hide their religious study from the Greeks is just like Joseph and Mary hiding in the manger. At each misunderstanding, the latke begins screaming. Every year, I’d turn the book to face outward, encouraging my daughters’ classes to scream right along with the latke.

This image never failed to make me smile: a group of Black, white, Hispanic, and Asian students with plates full of latkes, screaming their indignation at one holiday being conflated with another. My daughters were thrilled to be the purveyors of this delicious frivolity every year, and so they grew up with friends and classmates who were not confused about what Hanukkah was.

When our time together was done, I’d gather up several extra plates of latkes and applesauce to distribute to teachers and administrators in the building. The school librarian was usually waiting outside the doors of the library for me, grinning; she was Jewish, and with her children grown and gone, the latkes I brought her each year were sometimes the only ones she had. The principal smiled politely and set the plate on his desk for later, asking me to remind him when Hanukkah started this year.

Best of all was my visit each year to my older daughter’s kindergarten teacher. Mr. Daniels had been excited that first year about my suggestion to cook with his students. As the smell of latkes drifted through the school every year thereafter, he’d somehow always manage to poke his head in the door of the classroom where I cooked.

It’s no small gift that my daughters grew up in an elementary school that treasured diverse expressions of culture. Being allowed to temporarily displace lesson plans and schedules for an hour each year was never a given, but the memories my daughters — and their classmates — now have are irreplaceable. My daughters grew up learning Christmas carols as I did, but their friends grew up eating latkes every year, just like them.

My daughter is now studying to be an elementary school teacher. I hope that, someday, I’ll be invited to make latkes in her classroom once again.