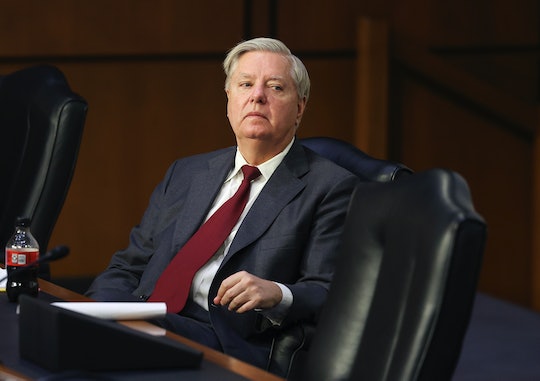 The bill has been described as “dangerous”

Republican Sen. Lindsey Graham, a 67-year-old man, has introduced legislation in the Senate that aims to ban abortions at 15 weeks across the country. Graham’s proposed bill would only allow for exceptions in cases of rape, incest, or where the physical health of the mother was in danger. This legislation, which has no hope of being passed at this point in a Democrat-majority Senate, comes just three months after the Supreme Court voted to overturn Roe v. Wade, the law of the land that had protected the federal Constitutional right to abortion for five decades.

“I think we should have a law at the federal level that would say after 15 weeks, no abortion on demand except in cases of rape, incest and save the life of a mother. And that should be where America’s at,” Graham, who held a press conference flanked by two anti-abortion activists, told reporters on Tuesday, per The Hill.

Graham said his bill — “Protecting Pain-Capable Unborn Children from Late-Term Abortions Act” — was in response to attempts by Senate Democrats to protect abortion rights on a national level. “After [Democrats] introduced a bill to define who they are, I thought it’d be nice to introduce a bill to define who we are,” Graham said.

Planned Parenthood CEO Alexis McGill Johnson agreed that the introduction of a national ban on abortions at 15 weeks shows who Graham is. “Anti-abortion rights congressional Republicans are showing us exactly what they plan to do if they get power. It’s dangerous — and the stakes have never been higher. This election is critical. It’s going to take all of us,” McGill Johnson tweeted.

NARAL Pro-Choice America also released a statement on Twitter, urging Americans vote. “Anti-choice Republicans across the country are trying to hide their real agenda to ban abortion—and now extremist @LindseyGrahamSC is introducing a bill in the Senate that would do exactly that. We need to vote his MAGA Republicans allies out of office in November,” the nonprofit organization wrote.

The South Carolina senator, who will not be defending his seat in the midterms this fall as he is not up for re-election until 2027, previously stated that he believed abortion access should be decided at the state level. It seems he has changed his tune, although he does not necessarily have the support of the Republican party. Senate Minority Leader Mitch McConnell said in a statement after Graham’s proposal, “I think most of the members of my conference prefer that this will be dealt with at the state level,” CNBC reported.

Graham went on to tell reporters, according to The Hill, that he actually believed a national abortion ban at 15 weeks gestation was a compromise that might satisfy both mainstream voters and anti-abortion activists who would prefer a total national abortion ban with no exceptions. “We’re trying to take a position we think will rally the country to be more sympathetic to an unborn child.”