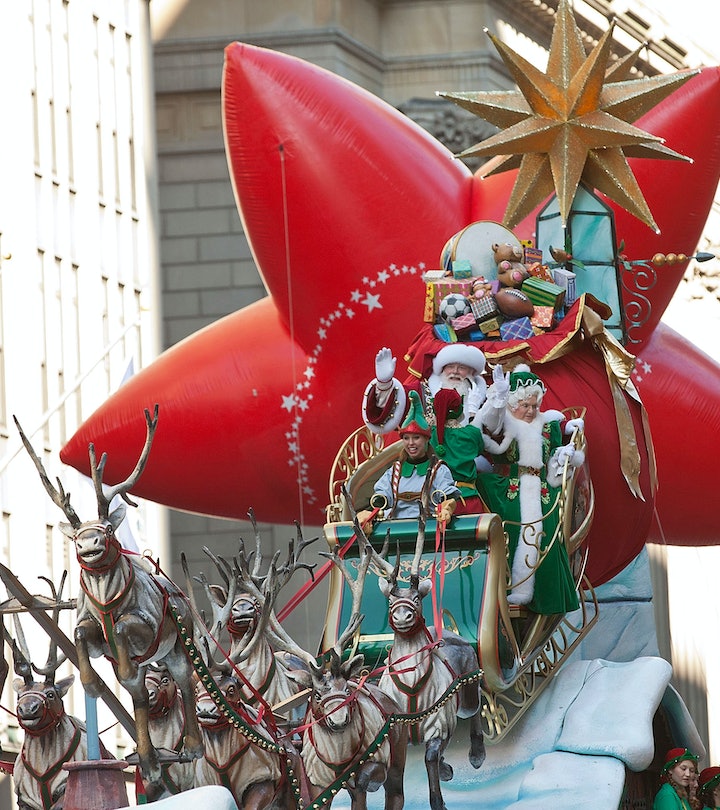 Macy’s Thanksgiving Day Parade Has Been Delighting Families Since 1924

The famous parade has only ever been canceled three times as a result of World War II.

With massive character balloons, extensively decorated floats, and special appearances from Santa himself, the Macy’s Thanksgiving Day Parade has been delighting children since 1924. But did you know the retail department store’s first parade wasn’t actually meant to celebrate the Thanksgiving holiday? Dive into the history of the Macy’s Thanksgiving Day Parade to learn how this beloved holiday tradition got its start and see how it has changed in the last 98 years.

The first Macy’s parade wasn’t about Thanksgiving at all.

Macy’s held its first parade in 1924. But the event wasn’t intended to be a Thanksgiving celebration. Instead, Macy’s founder Rowland Hussey Macy arranged the parade to celebrate the retailer’s flagship store in Manhattan expanding to cover an entire city block along 34th Street. According to History.com, the parade was held on Thanksgiving morning but centered around celebrating both Christmas and Macy’s as the “world’s largest store.” By infusing the parade with the Christmas holiday, Macy’s founder hoped customers would be inspired to spend and shop ahead of the holiday. The first of Macy’s Thanksgiving Day Parades kicked off at 9 a.m. local time on Nov. 27, 1924, and followed a route six miles long from Harlem to Herald Square.

The floats in Macy’s first-ever Thanksgiving Day Parade featured characters from popular nursery rhymes in order to match the nursery-rhyme-themed Christmas window display at Macy’s flagship store. According to History.com, the parade included the Old Woman Who Lived in a Shoe, Little Miss Muffet (who sat on a tuffet), and Little Red Riding Hood. Animals were also loaned to Macy’s from the Central Park Zoo to participate in the parade. As he continues to do today, Santa brought up the rear of the parade perched on a sleigh pulled by reindeer.

But although the Macy’s Thanksgiving Day Parade boasts a 98-year history, it is not the nation’s oldest Thanksgiving parade. That title actually belongs to a Thanksgiving Day parade the Gimbel Brothers Department store hosted in Philadelphia in 1920. According to WPVI, that parade, which saw just 50 people, 15 cars, and one Santa Claus participate, was also first organized as a marketing gimmick designed to encourage holiday shopping.

Character balloons joined the parade in 1927.

As the years went on, it became increasingly clear to both the parade’s organizers and audience that live zoo animals, who often became agitated and overwhelmed by the crowds as well as tired by the parade’s long route, did not make for the best parade participants. To replace the animals, Macy’s brought in giant, helium-filled character balloons. Felix the Cat was the first of these balloons to be introduced to the parade. It made its debut during the 1927 parade, according to ABC News. Macy’s has since added more and more giant balloons to its parade, much to the delight of children.

Has the Macy’s Thanksgiving parade ever not happened?

Generally, the Macy’s Thanksgiving Day Parade has happened every year whether rain or shine. In fact, since its start in 1924, the parade has only ever been canceled three times. According to Insider, the beloved holiday tradition was canceled in 1942, 1943, and 1944 due to the events of World War II.

Macy’s first televised the parade in 1946.

While today the Macy’s Thanksgiving Day Parade is watched by millions of viewers tuning in from states all across the country, it was more than two decades before the parade was televised nationally. In fact, the parade was broadcast on the radio before it was ever televised.

According to CNN, Macy’s Thanksgiving Day Parade was first broadcast on the radio in 1932. In 1946 the parade was televised, but only throughout New York state. The parade wasn’t nationally televised for another year when NBC shared it with the country in 1947.

The parade has left some spectators injured.

During the 1997 parade, wind gusts of up to 43 miles per hour caused a giant Cat in the Hat balloon to blow into a light pole, which toppled over onto spectators. News reports from the time reported at least two people were hospitalized with serious injuries as a result of the incident. One, a 34-year-old woman, was in a coma for almost a month after she developed a blog clot on her brain due to the light pole falling on her, UPI reported. The other injured person suffered a concussion and a broken wrist.

How did Covid-19 affect the parade?

In 2020, Macy’s modified its parade due to the coronavirus pandemic. The largest change? No in-person parade viewing. Instead, Macy’s produced much of the parade specifically for a television audience using a closed set and canceled performances by out-of-state high school and college marching bands in order to limit the need for travel.

The retailer has also announced that in-person and television spectators can expect to see a handful of new character balloons in this year’s parade, including Bluey, Greg Heffley of Diary of a Wimpy Kid, Dino and Baby Dino sponsored by Sinclair Oil, Stuart the Minion, and Striker the U.S. Soccer Star, a celebration of this year’s World Cup.

The Macy’s Thanksgiving Day Parade will kick off live from New York City on Thursday, Nov. 24 from 8:45 a.m. ET on NBC or streaming from 9 a.m. to noon in all time zones.

This article was originally published on November 4, 2021