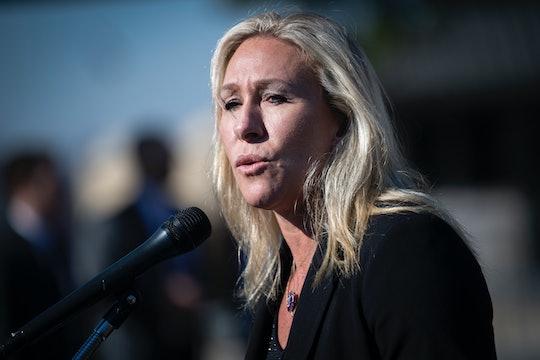 The Republican representative hung a sign claiming "there are TWO genders: Male & Female" outside her office.

Although spats between neighbors aren't unheard of, we rarely hear of them playing out within the hallways of the United States Capitol. But that's exactly what happened Wednesday when Rep. Marjorie Taylor Greene mocked a colleague's transgender child and support for the Equality Act by hanging a sign outside her office that claimed there are only two genders.

Following the reintroduction of the Equality Act in the House last week, Rep. Marie Newman placed a transgender pride flag outside her Capitol office. It was a change in decor she said she hoped her colleague across the hall would take notice of. "Our neighbor, [Rep. Greene], tried to block the Equality Act because she believes prohibiting discrimination against trans Americans is 'disgusting, immoral, and evil,'" Newman tweeted early Wednesday. "Thought we'd put up our Transgender flag so she can look at it every time she opens her door."

Well, Greene did take notice. And she responded to Newman's transgender pride flag by hanging a sign outside her office that read, "There are TWO genders: Male & Female 'Trust the Science!'"

"Our neighbor, [Newman], wants to pass the so-called 'Equality' Act to destroy women's rights and religious freedoms," Greene tweeted when sharing a video of her hanging the sign. "Thought we'd put up ours so she can look at it every time she opens her door."

Greene also refused to acknowledge Newman's transgender daughter, telling the Illinois Democrat over Twitter that, "As mothers, we all love and support our children. But your biological son does NOT belong in my daughters' bathrooms, locker rooms, and sports teams."

Newman has claimed she didn't intend to start a fight with Greene when she placed a transgender flag outside her office. Instead, she wanted to provide Greene, who has been an outspoken opponent of the Equality Act, with a visible symbol of the LGBTQ+ community. "I just wanted to make a statement so that she sees LGBTQ+ people," Newman said in an interview with CNN. "She's welcome to her sign. No one is buying it, and that is not science."

Greene's sign, of course, hasn't diminished Newman's support of the Equality Act. "I am immensely proud of my daughter," she tweeted Thursday. "Our transgender flag not only represents her but the millions of Americans that deserve not to be bullied or discriminated against by anyone — let alone a sitting member of Congress. Enough with the hate, let's pass the #EqualityAct."

A number of Newman's Democratic colleagues have denounced Greene's sign, hailing it as a perfect example of why Congress needs to pass the Equality Act and bar discrimination based on sexual orientation and gender identity. "This hate is exactly why the #EqualityAct is necessary and what we must protect [Newman's] daughter and all our LBGTQ+ loved ones against," Rep. Sean Casten tweeted, calling the sign "sickening, pathetic, unimaginably cruel."

Rep. Pramila Jayapal, whose child came out as gender-nonconforming in 2018, thanked Newman for her tireless support of the Equality Act. "From the mom of one trans kid to another, we will pass the #EqualityAct," Jayapal said in a tweet directed at Newman. "For Evie, for Janak, for thousands more to be able to fully be who they are. So glad to welcome you to Congress."

More Like This
Obamas Issue Powerful Statements After Supreme Court Ends Roe v. Wade
This Map Illustrates Just How Many States Would Ban Abortion If Roe V. Wade Is Overturned
6 Takeaways From The White House’s First-Ever Parents Press Conference
Chris Evans Has Choice Words For Critics Of The Same-Sex Kiss In 'Lightyear'