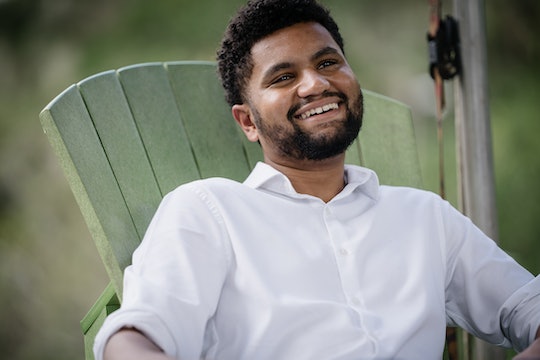 His biological mother inspired him to run for office.

Maxwell Frost made history on Tuesday by becoming the first Gen Z person to be elected to Congress. The 25-year-old Congressman-elect from Florida hit the campaign trail on a passionate platform of medical care for all, ending gun violence, and creating good green jobs for a sustainable future. All important issues that mean something deeply personal to Frost. Because they all meant something to his family. Here’s what else you need to know about Frost’s family.

Frost’s grandmother, who he calls Yeya, came from Cuba during the Freedom Flights of the ‘60s with “with only a suitcase and no money,” he explained on his campaign website. And after she arrived, life was incredibly difficult for her. Frost wrote that his grandmother “worked in Miami factories more than 70 hours a week, where she was exploited and was forced to accept harsh working conditions in order to make a life for her family.”

When Frost was a little boy, his grandmother moved to Orlando to help raise him and give him “life advice” and “unconditional love that has in part fueled my life & love for others.” And this eventually spurred him on to become an activist.

She did not survive to see him be elected to Congress.

Sadly, Frost’s grandmother passed away at the age of 97 years old in October, weeks before her grandson was elected to Congress. “My grandma Yeya, Zenaida Argibay, one of the most important people in my life has passed away,” Frost wrote on social media, sharing a sweet photo of the two of them together. “She passed peaceful at home here in Orlando with our family at 97 yrs old. She was a believer, Grandmother, Great-Grandmother, mother, sister, orphan, chef, eater, survivor, & fighter.”

His biological mother was a “victim of the system.”

Frost was born one of seven children to a mother who he calls a “victim of the system,” explaining on his website that she had to make the “difficult decision” to place him for adoption. “A victim of the system and enmeshed in trying circumstances, my biological mother was caught in a cycle of drugs, crime, and violence while pregnant. She didn’t have healthcare and wasn’t able to see a doctor even once. As the mother of seven, she made the difficult decision to put me up for adoption because she lacked the resources to care for and raise another child.”

Meeting his biological mother changed his mind about running for Congress.

Frost was already the national organizer for the March for Our Lives anti-gun violence campaign and worked with the ACLU when it was suggested to him that he should consider running for office. He was hesitant, he explained in a Yahoo! News interview, until he spoke to his biological mother. “What changed everything for me was actually having a conversation with my biological mother,” Frost said. “Learning about her life, learning about the struggle she went through. Learning about the fact that she had me at one of the most vulnerable points in her life. I hung up the phone and said ‘I need to run for Congress.’ For people like my mother.”

That level of empathy will be a real gift for Congress. And it was helped along by the women in Congressman-elect Maxwell Frost’s life.