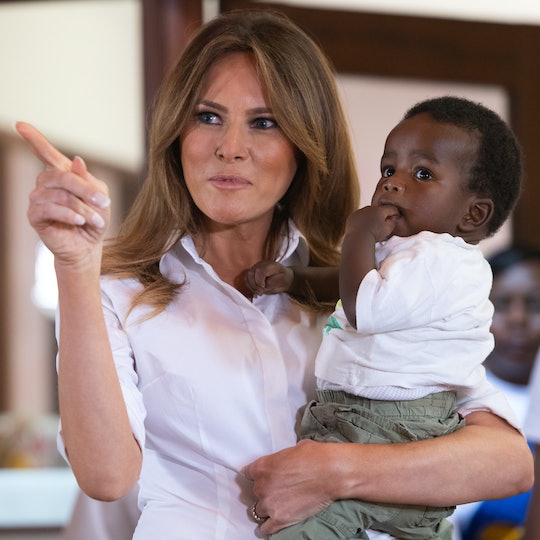 The former first lady reportedly wanted the children to be able to see how beautiful they were.

After visiting Africa in 2018, then-First Lady Melania Trump wanted to send children in Malawi mirrors, according to a new tell-all memoir from a former top White House aide. Stephanie Grisham, who served as the former first lady’s press secretary during her solo Africa visit, has claimed Melania proposed sending children in Malawi full-length mirrors so they could see how strong and beautiful they were. The former first lady has dismissed Girsham’s memoir as a manipulation and distortion of the truth.

In I’ll Take Your Questions Now, Grisham claimed Melania and her entourage were “surprised” when children at Chipala Primary School in Malawi’s capital city of Lilongwe asked them to use their phones to take their photographs so the children “could see what they looked like.” According to Business Insider, which received an advanced copy of Grisham’s book, the children’s request left an impression on Melania.

“As soon as we returned to the United States, she wanted us to send full-length mirrors to the school,” Business Insider reported Grisham wrote in her memoir. Grisham claimed Melania insisted that “children need to know what they look like and see that they are very strong or very beautiful.”

But while the former first lady was reportedly “insistent” on sending full-length mirrors to the children of Chipala Primary School, Grisham claimed Melania’s then-chief of staff Lindsay Reynolds shot the idea down. According to Grisham, Reynolds claimed the White House counsel's office deemed the mirror gift “a liability.”

“Only my opinion of course, but I never really believed that to be true,” Business Insider reported Grisham wrote. “Because on more than one occasion Lindsay shared with me that she thought it would be a PR nightmare, a model sending African children mirrors.”

Grisham served as Melania’s press secretary from 2017 to 2019 before briefly stepping into the role of White House press secretary from 2019 to 2020 on her way to becoming Melania’s chief of staff from 2020 to 2021. She resigned from her post within the Trump administration following Melania’s refusal to address the Jan. 6 attack on the U.S. Capitol. In I’ll Take Your Questions Now, Grisham defended her time working for the Trumps by claiming she felt she had no other options.

“I was a single mom with no trust fund. If I had quit earlier, where would I have gone?” The Washington Post reported Grisham wrote in her book. “The Trumps were all I had. At least that was what I believed for a long time.”

While Melania has not addressed any of Grisham’s claims individually, her office condemned all of Grisham’s memoir in a statement released Monday. “The author is desperately trying to rehabilitate her tarnished reputation by manipulating and distorting the truth about Mrs. Trump,” CNN White House Correspondent Kate Bennett reported the statement read. “Ms. Grisham is a deceitful and troubled individual who doesn’t deserve anyone’s trust.”