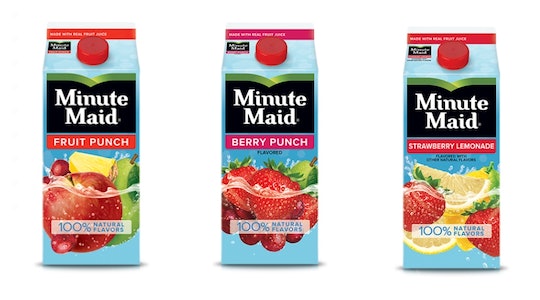 Minute Maid Recalled These Juices In 8 States Over Metal Concerns

Multiple varieties of Minute Maid juice have been voluntarily recalled by The Coca-Cola Company due to concerns the juice may contain potentially hazardous metal objects like bolts or washers, Today has reported. While the recall includes at least three varieties of Minute Maid juice — Berry Punch, Strawberry Lemonade, and Fruit Punch — most consumers won’t have to worry as now-recalled juices were reportedly only distributed in eight states.

“This product did not meet our high-quality standards due to the potential presence of foreign matter,” a Coca-Cola Company spokesperson said in a statement to People. “We took this voluntary action because nothing is more important to us than providing safe, high-quality products to the people who drink our beverages.”

According to Today, the Minute Maid product recall affected only 59-ounce cartons of refrigerated Berry Punch, Strawberry Lemonade, and Fruit Punch varieties that were distributed across Pennsylvania, New York, Maine, Virginia, Maryland, Connecticut, New Hampshire, and North Carolina. Overall, some 7,475 cases of Minute Maid juice are being recalled as part of what the Food and Drug Administration (FDA) told People was a Class II recall.

In an update from Food Safety News, The Coca-Cola Company cited concerns that juice cartons may contain a “foreign object,” specifically a “metal bolt or washer.”

In comments to Today, a spokesperson for Coca-Cola said the company had already completed a recall of affected products from stores in Pennsylvania, New York, Maine, Virginia, Maryland, Connecticut, New Hampshire, and North Carolina but had concerns customers who’d previously purchased a carton of the now-recalled juices might still have it at home.

Consumers who find they have a carton of Minute Maid that has been recalled are urged to return the product to the store they purchased it from or contact Coca-Cola's Consumer Interaction Center at 1-800 GET-COKE.

More Like This
Here’s What You Need To Know About That Viral 1960s Baby Formula “Recipe”
Are Movie Theaters Too Loud For Pregnant People? OB-GYNs Explain
10 Easy Vegetables To Grow At Home
12 Pretty & Yummy Mother’s Day Cocktails